Sipping french press coffee from Kinfolk's, I'm inside of the old arcade when all of a sudden, BOOM! Scattered shrieks float into the air as everyone in the vicinity sort of jerks around in the direction of the huge thunderclap that had just pierced the sky. Walking to the edge of shelter, I could see that the sky was a mottled grey. Where the heck had that come from? And how often, or rather, how long was it going to be throwing big bolts of fun at the ground?

I splish-splashed my way back to the park. 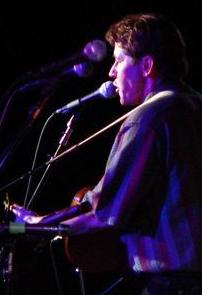 Bob Haworth was onstage just ripping out the old chestnuts in his first of two sets during the afternoon and evening. Frailing on a banjo, stomping a foot pedal that pounded a bass drum, blowing on a mouth harp and singing in a crisp voice, Bob swept through an amazing catalogue of tunes even as the wind and rain whipped around the outskirts of the pavilion. As a former member of The Kingston Trio, The Brothers Four and The Hudson Brothers (remember them?!), Bob has developed a real showman's style and verve that's truly infectious.

Traffic remained constant. People came and went, but always seemed to return. A handful of events were taking place around the area, from a similar festival down at Rockledge Ranch to some sort of charity walk that saw hundreds of people walking through town wearing white shirts and holding up signs. At least until the rain started splatting down, then they were running through town wearing see-through shirts, but they still held the signs up. Over their heads.

During the breaks between sets, I wandered around, taking in some of the artifacts being hawked by the vendors. The CD table, representing the recordings of most artists scheduled to perform, was located near the edge of the stage where I had parked the scooter. Erin Ford walked by and asked if I had any CDs for sale and that she would be happy to put them on the table along with the rest of the discs. I had completely forgotten about the copies of Dulcimerica: Volume 1 that I had brought in the suitcase, so I scootered around the corner to Casa de Laurenzi and swooped back with a stack of them. Bud III, Robert Force and I were scheduled to play about 45 minutes at 11:15 on Sunday Morning, just before Bob Haworth returned for a third set. Seeing neither hide nor hair of Bud nor Robert, I decided to not think about the set at all and sat back to watch my other roomie take the stage. 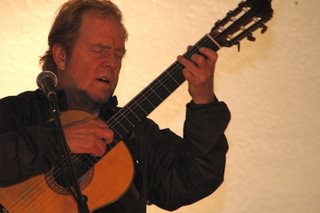 What a smoothie, that Michael Johnson Prior to the Mountain Music Festival, I wasn't familiar with his music. The YouTube clip of "Bluer Than Blue" didn't ring any bells either; perhaps I was just traveling in different circles during those years. This is another huge dude who's written songs for John Denver, Suzie Boguss and Chet Atkins, Leo Kottke, had huge hits of his own ("That's That", "Give Me Wings", "Bluer Than Blue".)

Exquisite finger-picking guitar and a velvet smooth voice, a gentleness and sense of peace rolls off of the stage as he sings, eyes closed. Some of the tunes are desperately sad in a quiet sort of way. Others dabble in political commentary, a message lurking all around the outskirts of the performances throughout the festival. Michael's skill in drawing the audience to him resulted in a bond that I've rarely seen at a live show. His run-up to a performance of "Bristlecone Pine" was both tender and hysterical. Around the house, he was such an unassuming guy. Laid-back, quick witted, easy with a laugh and a powerhouse singer/songwriter.

Time passed and I made some more schedule decisions because I had yet to see the all-fired Dulcimer Shop or any of the many shops that lined the main drag; I had some shopping to do and needed to find a phone card in order to connect with Jae. The sky continued its yield, prompting a sort of turnover in the crowd as thinly dressed folks moved along to warm their bones while warmly clothed folks shuffled in to escape the unrelenting rain (and maybe check out a show.) A local guy named Josh, whom I'd been talking with, went with me as I hurried down to the Dulcimer Shop and got a chance to see it for the first time. It was everything that I expected and much more. Instruments lined the walls, CDs shouted from display racks, the scent that I remember from the old Dulcimer Shop at Knott's Berry Farm hung in the air, the same scent that would waft out of boxes shipped from Manitou Springs, CO to Buena Park, CA. It took twenty-one years to complete the connection between the scent and the source. It felt like a new circuit had come online in my spirit, just standing there in the place. I'd still have to wait until Sunday for a proper tour, which was bound to be a dilly. Furtively, I was asked "have you seen the basement?" by so many people, the expectations crept up into the red zone.

The shop was closing down, Cripple Creek about to hit the stage, my feet were starting to freeze from all of the walking in rain and splooshing through puddles. Without an umbrella, I was pretty much moist. The rain didn't appear to be considering a cease-precipitation, so I took leave of Josh to make the short and hilly walk back to Casa de Laurenzi, where a change of clothes and a bit of warmth would be a great rejuvenator.

Rick and a friend came in after some time. I had been playing with Robert's little Roland Cube amp, seeing what kind of sounds I could get out of it. It has a few knobs with several different effects between settings; delays, chorus, tremolo, a few distortion channels. The idea wasn't to go Dylan in Newport '64, just add a little flavor to the signal as we pushed the envelope a little. Robert was already planning on going through his little amp, a rare Trace Elliot acoustic cube. Bud was braving the surf with a microphone. I had just finished a run-through of "Black Indian" when I noticed them standing there. Apparently, Robert had been looking for me earlier because Bud had cancelled the last two sets due to rain. Since he was closing out the show, he wanted me to go up there with him.

Another opportunity to jam with Robert Force, on his set. What did I do in a former life? How much of a blessing is that?

It was still pissing down rain, so I appealed to my host for something Rocky Mountain suitable that would keep me from developing a death of cold. When all was said and done, I looked like Kenny from "South Park." 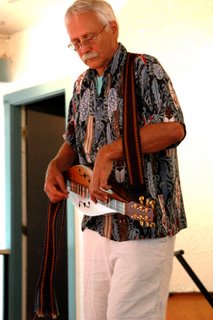 Walking down to the park, the idea machine began throwing concepts at the wall to see if they stuck (or stunk.) Having viewed Robert's online videos on technique and having jammed with him for awhile, I was aware of the textures that he manages to get, the give and take of any piece that he plays. There is hard strumming, slow strumming, flat-picking and cross-picking, barre-ing and chording, not to mention a hefty bit of soloing. One of the cool things about jamming with Robert is, he's so damn good, you can just throw backing chords out there in a nice, round progression, and he'll riff not only until the cows come home, but until they leave again the next day.

When I arrived, Robert spotted me and headed directly over. The rain had ceased and we were standing just outside of the pavilion cover, facing the stage as Chilly Winds kicked it up a notch for their third set. To sum up the brief conversation, I'd come up a few songs into his set and we'd do "Wellyn", then one of mine and Jah knew what else. Sounded like a plan. And this time, it wouldn't be a surprise.

I decided to stand this time, so we could play off of each other better. Standing and still playing traditional style dulcimer (frets up) is a trick that I've never seen anyone else pull off; most standing dulcimerists play with frets out, like Robert, Butch Ross and others. To keep the instrument from bouncing around too much, I've developed over the years a way of counterbalancing the body with the ring finger and pinky of my right hand. It still requires a bit of moving around and shifting to keep it from flopping over.

We began with "Wellyn" and put a little overdrive into it. Then, I can't tell you what we played exactly because I have no clue whatsoever; can't wait to see the video. Sunday's performance and Saturday night's performance sort of blended together as far as songs played and moments savored. All I remember is Robert and I had just taken the groove down to something sort of mellow, yet still pulsing and intense. We're both standing there next to each other, facing the audience and he looks at me and says something to the effect of, "should we kick this into high-gear?" I paraphrase - but he was inquiring if I wanted to push the "go" button on this performance and I think my words were "let's go."

And, lordy, I don't know exactly what we did, but it was edgy. And I know we played a glittering assortment of Robert's songs, including "Did Ya?", "Sing Sailor" and "Conversations With The River." But in order to make it across the roaring river, I need to concentrate on one rock at a time. Musicians often go into the much-heralded "zone" when they play - it's a place firmly rooted in The Moment. The Now. It's the bridge between Was and Is. It's a stepping stone towards Will Be. It neatly occupies its very own space consistently in linear time and somehow in non-linear time as well. Ever-shifting, yet ultra-modern, The Moment. It's a snapshot, a laser's burn path. It's solid yet elusive. Holding on and letting go at the same time, like a gymnast or a trapeze artist, timing that swing with the arc of the next, timing that footfall to land on the stones that poke just above the rushing waters. Taking these notes and fitting them into the framework of what someone else is doing with notes and shifting them around, moving them so that they mesh and not collide. Stuff of The Moment.

And then it's gone, *poof*, end of show and Robert and I are hugging each other from center stage and the audience is clapping, hooting and whistling. What fun! The give and take was exciting, the textures were like that which I've never heard in my life. What a joy to combine rhythms and flavors with one of the great dulcimer players, to be challenged and inspired to step outside the usual safe open spaces and head for the dangerous hills.

Or, as Bud Ford announced to the crowd, we'd be heading for the Mariner bar to do a little after-party jamming.
Posted by Bing Futch at 9:24 PM