Mohave will be the headlining act at the Wall Street Plaza's annual Fat Tuesday blowout on February 28th. Details are still coming in, but we know that Cadillac Recipe is also on the bill (Rob's going to work a little overtime that day) and our set begins at 10:30 p.m., running up until midnight. There's no cover - and if you're not familiar with Downtown Orlando, Wall Street Plaza is where Subway, The Globe, Slingapours, The Tuk-Tuk Room, Wall Street Cantina, The Monkey Bar and other club/eateries are located. We'll have more details soon!

I went down to the local Apple store to pick up a copy of iLife '06, which contains the latest upgrade to Garageband, and I'm as happy as a cop in a Krispy Creme.
Posted by Bing Futch at 7:24 PM 1 comment:

I've been working on a piece called "Bomb", that is coming around very nicely, have a couple of rehearsals this week and though I missed Kentucky, there is a lot coming up that's quite exciting.

I updated the web site a bit - nothing too earth-shattering, but it's still a change over what was before. Let me know if you think those are winter colors, okay?
Posted by Bing Futch at 11:43 PM No comments: 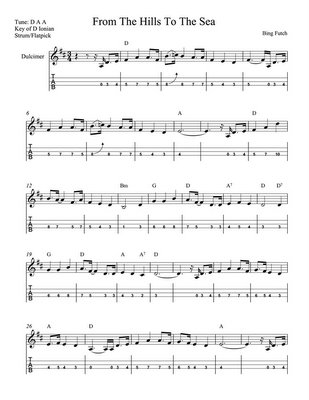 While the Kentucky Music Weekend carries on up north, I'm keeping myself as busy as possible, working up song templates and getting material together on several different levels. The first original dulcimer piece that I've gotten together in print form is "From The Hills To The Sea", a sweetly sashaying little waltz with Irish and Appalachian influences. You can download a .pdf of the sheet music below:

From The Hills To The Sea.pdf

At first, I thought handwriting the sheet music was going to be necessary. After bringing myself back around from a dead faint, some time was spent mucking around with Sibelius, which turned out to be strangely both remarkably helpful and hopelessly irritating during the process. With boiled peanuts sending off a folksy aroma from the kitchen (put 'em on last night during rehearsal, more on that later) and the whole wheat bread starting to fulfill its promise in the bread machine, I managed to suss out how to edit existing tablature staves in Sibelius and thusly created a workable, if not slightly flawed, setting for mountain dulcimer in Ionian mode. The idea being, if I write out a song using Standard Music Notation, I can then copy and paste the music into the dulcimer tab with the numbers coming up where they need to be; which is the part that I haven't quite gotten right yet. It's a start, anyway.

Rob Soviero from Cadillac Recipe came over last night for a rehearsal (and also brought back the crock-pot we had let him borrow, so I could start a new batch of boiled peanuts) - we worked on "Black Indian" and "Come On With Me" which both sound really good already. The object here is to learn the songs from the new album so we can play them and support the release. At the same time, we'll be learning newer material and getting enough material together for at least 90 minutes of performance time. CD copies have gone out to Ed McCurdy of the Blues Rattlers, who's excited about the project, and Mark Janssen, formerly of Plain Jane Automobile and currently gigging with The Orange Blossom Trails. Everyone's aware that nothing's permanent and that we're approaching things with an eye towards scheduling. If one person isn't available, someone else will be called in; that way, no gigs are missed, turned down or otherwise chucked out the window. Rob's obvious selling points are that he's a great bass player, obviously dedicated to the craft and is also a full-time musician as well, so our calendars are already fairly matched.

Concurrently, while I'm knocking out printed music for my dulcimer instruction and some forays into publishing, I'm also continuing to demo out songs, which I'm posting on MacJams.com and have started to host them over at iCompositions as well. I've always made demos for the purpose of helping others to learn them, but now I'm also producing them with an eye towards pitching them to publishers and producers. Which means, I'm putting a lot of work into them, but not exactly with the intention of actually releasing or performing them myself. As Clint Eastwood once murmured, "a man has to know his limitations" and the only ones I have are physical. So limit my songcrafting to what I can personally recreate, when I have a much wider palette available out there?

And that's a thought to muse upon as I retire to the kitchen, snap up a few of them slurpy-good peanuts, and begin preparing the cajun bean soup for tonight's supper.
Posted by Bing Futch at 5:33 PM 1 comment:

Guess the obscure quote from a comedic movie in the above subject line and win a free Mohave CD. By the way, huge thanks to the folks who have been going to CD Baby and picking up CDs left and right. We are now OUT OF STOCK, and have to send some more. That's a good bother.

I missed dulcimer jam tonight because of work - and won't be able to attend the Winter Dulcimer Weekend coming up Friday, because of money. Ironic, isn't it? But Nancy Barker, the organizer of the weekend and its much bigger and more famous cousin, Kentucky Music Week, emailed me and said there is still a chance I might be able to teach at the week long festival during the summer. That's encouraging - I really thought I had blown my chance.

In the meantime, I've been demoing like mad. Got a CD into the hands of another local drummer and the Backbooth in downtown Orlando is looking to book us. I'm thinking we might go out as a trio, just like the old days, until the full ensemble can get together. Many people forget the days of three Mohave members - but I see it like it was yesterday - in fact, it was, to a certain degree.

Bass player is coming over on Friday to groove through some material - and I found out that "Breaking News", the movie for which I wrote the song, is still in pre-production, but the writer is now flying to L.A. and meeting with an executive producer, so that's very good news!

The new version of the demo is on the Mohave MySpace account. It's a little different style of singing for me, but it was fun as all get-out to produce.
Posted by Bing Futch at 1:21 AM No comments: