While jogging this morning in the stiff breeze preceding the impending arrival of Hurricane Isaac, I suddenly found myself pondering the chord progression to Michael Jackson's song "Liberian Girl."

Jackson always knew how to wring the most out of a progression and the type of chord movement in this song is typical of his most famous hits.

I came home, sat down at the piano, and began trying to figure out the key of the tune which turned out to be G# minor.

How'd I come to that conclusion?

I listened to the first chord (G#m) and asked myself what the relative Major key would be.  There are a couple way of doing this (besides having it memorized, which I didn't):  one, you play the G# natural minor scale - G# - A# - B - C# - D# - E - F# - and then either go backwards six notes, including G#, or forward two notes to determine the first note of the associated Major scale.  Or you use the circle of fifths to travel "20 minutes" clockwise around (including the starting note) to find your relative minor.  You'll come up with Ab, but since we're working in a key full of sharps, just adjust the spelling to G#.  Using scale degrees, you can chart out the chord possibilities thusly:

Now, remember that we're in the relative minor key of G#, so we want to count that note as first in its scale.  Our scale degrees and chords remain the same for each particular note; they just happen in a different order.


This gives us the template from which to begin sussing out the chord progressions of the tune.  Now,  what drew me to this song was some of the luscious harmonic action taking place towards the end of the chorus and I knew there would be some substitutions looming and that's mainly what this bit of discovery is all about.  Still, Jackson plays it by the book for the most part, so figuring out those elements of the tune were quite easy. Here is the verse progression:

Simple as that.  Now, I write it out with scale degrees so that if I want to transpose it, I can do so.  Match the above progression with our G# minor scale and you'll come up with these chords:

Now, onto the chorus, and I'm excited doing this because I want to crack the Jackson code and discover some of the secrets of why his music was so tasty.  Here's what I come up with:

Whoa!  More than just formula going on here, but let's have a closer look.  We've got a modulation from the VI to the i which is part of the minor scale degree situation; so chorus begins E to G#m.  Then, Jackson pops a chord substitution, which is any chord that's not part of the associated harmonic chord structure.  Instead of simply playing the iv chord, he makes it a minor 6th chord, which is just fraught with delicious drama.  If that's not enough, he bounces that up against an even more dramatic chord substitution in the form of a V chord as opposed to a v chord.  Often times in music, changing one of your established chords from Major to minor or minor to Major is enough to really shake up your arrangements.  Here, he not only does that with the V chord, but he also makes it a sus4 that resolves at just the last beat before kicking back into the verse.  Slurpy!

One more thing.  To wring the maximum effect out of that minor 6th chord, he places the bass note (in this case A#) on the bottom, thus making it a "slash chord."

Finally, the song repeats a three-song progression as Jackson sings variations on the lyric "I love you Liberian girl":

So, there you have it!  This is the kind of stuff that I hear in my head and then feel compelled to go chase down the formulas in order to better understand and utilize music theory.  I'll be doing this quite a bit over the next few months as I continue to dig deep in the studio while writing and producing.  Thanks for reading!

It's Not Global Warming - It's 2 HOT Florida Winter Events! 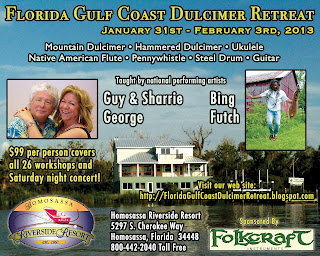 Che hun ta mo!Winter in Florida is going to be sizzling in 2013 as we present two radically different events in the Sunshine State:The first will be our fourth annual Key West shindig, now known as the Key West Dulcimer Gathering. January 24th - 27th, 2013 in Key West, Florida. Butch Ross and I will be presenting mountain dulcimer and ukulele workshops, private lessons and a concert at Casa Cabanas, which was the site of our outing earlier this year with Robert Force and Scott Snyder. No registration fee! The workshops and lessons are pay as you go and we'll once again be sightseeing and enjoying an authentic Cuban cookout at the casa. It'll be laid-back as it can get, for that's the tropical island style! For more information, visit our website at http://keywestdulcimergathering.blogspot.com and our Facebook event page at http://www.facebook.com/events/357482027659353/Then, the following weekend, January 31st - February 3rd, 2013, I'll be joined by Guy and Sharrie George for the first annual Florida Gulf Coast Dulcimer Retreat in Homosassa Springs, Florida, presented by Folkcraft Instruments. $99 registration includes all 26 workshops and Saturday night concert with the focus on mountain dulcimer, hammered dulcimer, Native American flute, penny whistle, ukulele, steel drum and guitar. The site for all of this will be the Homosassa Riverside Resort where we have a discounted block of rooms. This will showcase the old Florida river style, with plenty of opportunity for boating, fishing, scalloping and swimming with manatees. For more information, visit http://floridagulfcoastdulcimerretreat.blogspot.com/ and our Facebook event page at http://www.facebook.com/events/143776002427014/On February 4th, Guy, Sharrie and I will be leading a RV caravan to the Ft. Wilderness Resort at Walt Disney World for yet MORE musical fun as we camp out on the shores of Bay Lake, jam, hang-out and enjoy all of the fun that a stay at The Magic Kingdom has to offer.It promises to be a wonderful three weeks of fun in the sun and I hope you'll be able to join us!Sho na bish,Bing

Posted by Bing Futch at 6:45 AM No comments: