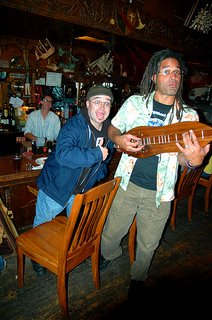 According to Bud Ford III, The Mariner pub used to allow smoking and on some nights, you couldn't even see the person next to you, that's how bad it was. Since banning smoking, he said, the place has been a lot easier on the senses. With a vaguely pirate decor including a torn sail and mast that juts across the ceiling, The Mariner wasn't exactly expecting the flotsam and jetsam of a folk music festival to traipse down the street and pour into their establishment. Members of all the bands, along with a few others who had been lurking around with instruments, began to gather near the narrow stage where the karaoke nights take place.

And they made music.

And the acoustics were really very good for this sort of impromptu jamming. As more and more people made their way into the small pub, the musicians took turns playing songs. 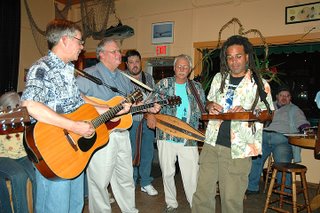 And it ran the gamut, from old folk to hippie 60's. I'm sure the bar staff were stoked, because it was right about that time that everyone pretty much started getting their party on. I'm not sure that I've ever seen it that loose and funky at a folk festival.

There was not a real good chance of being heard above that many guitars and a stand-up bass, so I joined the jam a few times, just to have some fun in that energy space, and there were little holes in the fabric of the music where I could actually rise up and be heard. The songs, especially "Take Me Home Country Roads", were such a great selection of crowd requests and picks amongst the players. Some of the regular patrons were a little dismayed to find that what they termed "Hee-Haw" had invaded their Saturday night space. They should be so lucky. It's not every night you get to hear a real banjo. 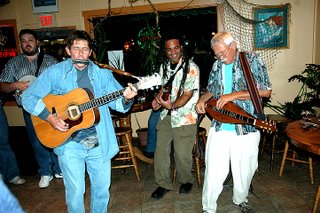 One by one, some of the devoted festival audience began to leave, and then some of the musicians, slowly diminishing the jam circle, but not tamping down the spontaneous fire of the spirit flowing through their instruments and bodies. The smiles that multiplied throughout the bar, the folks on the fringe sitting with their backs towards the rest of the pub, facing the action by the karaoke stage. It was informal, standing around, not even on the stage itself. Only the bass player had plugged in, and even that was low as to merely suggest the bass in that section of The Mariner.

The day had started early for me and the sudden effects of the high Colorado altitude was having its gradual way. Vowing to not party too hard, I sat down at the bar with Bud III and ordered some local brew.

Bud III is an interesting guy; we hit it right off. Besides having a love for the mountain dulcimer, both in its traditions and its many possibilities, he's also a fan of the movies "Tron" and "The Adventures of Buckaroo Banzai Across The 8th Dimension", not to mention he's one of the few people I know in the world who remembers the theme song to the Knott's Beary Tales ride at Knott's Berry Farm.

Welcome one and all
y'all come have a ball
things are very fine
riding on that old Knott's Berry Line!

Our jamming sessions were very fruitful. He's a great dulcimer player with a great ear for arrangement. I could see working with him in a duo, both of us are looking to push towards the next level and we like quoting lines from Hitchhiker's Guide To The Galaxy. Besides that, he's a sweet spirit and real nice guy, which makes it a joy to just hang around with people like that.

More and more people hit the wall and took their leave until just a handful remained, so deep into the night that it became "last call" which then cut power on five of the songs I had left in the jukebox. Foo. So I motored through the quiet, empty streets, feeling the bracing cool air buffeting my face. Down a slope, up a street here, up towards Casa de Laurenzi, park the Vino in the garage, head inside, visit with Rick for a little while and then spill into bed, filled with thoughts and visions, music and memories of the day, swirling around inside of my being, saturating the soul, melting in with the flesh. Absorbing the real and the not-so-real as it's presented through art, conversation, observation and meditation. To hear the still, small voice, you have to be smaller and quite still. In mile-high country, I had already come to the mountain. But tomorrow morning, after rising naturally, I was going to climb.
Posted by Bing Futch at 4:46 PM