Innocent Bystanders
Originally uploaded by dreadmon.
My experience at the Mountain Music Festival can be summed up by how it began; with me bouncing along on the back of a scooter driven by Robert Force, an exciting-yet-comforting ride. When we arrived at Soda Springs Park, we were met by Bud Ford's daughter Erin, who had picked me up from the airport. Having only communicated a couple of times through MySpace, it was our first time in actual conversation while on the way into Manitou Springs. It didn't take long to figure out that hanging out would be an effortless thing; we're both peace-loving hippie types that like making music, reading Douglas Adams books and marking 4:20 appropriately. We hit it off.

At the park, as Robert and I dismounted from the scooter, Erin walked over and held up a small, familiar-looking type of key and gave a slight glance to the silver-and-black Vino that we'd parked next to. I hadn't even given much thought to mobility and now I definitely didn't need to. The girl rocketh. Her friend Janeen told me much later in the day, it hadn't even occurred to her that maybe I hadn't the foggiest clue about how to ride a motor scooter. Fortunately, I've owned a Yamaha or two in my life, so it didn't take long to start swooping around town like a man with a mission. And I was. On a mission, that is.

To soak up the essence of the weekend.

The first act, Bruce & Friends went on a little after 5 pm, acoustic blues and folk that was the soundtrack of meeting all kinds of cool and interesting people, including, at long last, Bud and Donna Ford.

Bud is about as laid-back as they come, bearing no slight resemblance to Santa Claus while Donna is a trim, energetic sprite with a hilariously blunt edge. They are down-to-earth and very real with sweet spirits, just as I imagined them, only more so. 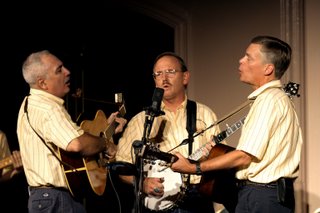 Chilly Winds hit the stage around 6 pm or so, doing old Kingston Trio songs that had the crowd singing along. Each of the acts performing throughout the weekend were scheduled to play on each day, one or more shows, so I was planning on marking blocks of time during which to slip away from the festival and check out historic Manitou Springs, especially now that I had a way of zipping around. A beer was sounding really good and I needed to pick up some water to keep hydrated at the higher elevation, so after listening to Chilly Winds for a while more, I headed over to the little Vino, fired up the engine and headed out towards the main drag through town. I'd be back in time to catch Robert's set at 7 pm.

Manitou Springs is a trip. It reminds me very much of Topanga Canyon in California; a little sequestered hamlet with an eclectic populace and a strong artistic vibe. Dare to call it "arty", there's something mystical about the place, which is exactly what the Ute, Arapaho, Cheyenne and Kiowa indians thought when they first discovered this land with the towering mountains and the bubbling healing springs. Lots of odd little shops, western and indian trading posts, bars, coffee houses, food joints and a great old arcade containing some games that were over fifty years old! It was hard to pull myself away from all of its quirky excess, but it was getting close for Robert to take the stage and I was looking forward to seeing him live for the first time.

Back at the park, I hung out with Bud Ford III towards the back of the covered stage area. Sitting on a picnic table with the dulcimer case strapped to my back, just in case I felt the need to noodle or wanted to jam with someone. You never know.

Robert was fantastic. I'd seen him perform via the videos on his website, but this was a whole other experience; better sound, better vibe and a great setting, full of flavor. His dulcimer style is unique, when you hear it, if you're familiar with his music, you recognize it immediately. His six-string technique, alternately switching between full on barre chord strumming to ethereal flat-picking and cross-picking. He makes the dulcimer shout and sharply cry out, then has it harmonize with itself with floating notes that blend in to one another. Maximum sustain of beautiful melodies, dramatic changes of color, simple refrains. And his songs just begin from there - add his whimsical, heartfelt delivery and lyrics that are playful, knowing, silly and wise, powerful and gentle for the spirit. His presence on stage is kinetic, always moving, always swaying, sometimes bouncing from one foot to the other, nothing show-offy, just incorporating whole body energy into the performance. He's a captivating dude - which is why I was completely caught off-guard when he invited me up on stage to play "Wellyn."

I must've looked like a deer caught in the headlights and Robert, shading his eyes a bit from the glare of stagelights, said that he'd do one more tune to allow me time to get ready. I had to take a leak something fierce and needed to tune Joline, so I beat feet across the park to the restroom building, then bounded back and tuned up in time for Robert to start introducing me to the audience. I wasn't nervous. But I was buzzing with excitement because my wish had come true! I was going to perform "Wellyn" with Robert Force onstage at a festival. How cool was my life?

Choosing to sit down rather than stand, in order to get enough pressure on the barre chords, I scrambled to get comfortable and on the mark as the sound man got me situated with a mic for the dulcimer. After Robert introduced me again and I gave a small, excited bow to the audience, he snapped off a quick eight counts and it was on. Chaos in my brain, then razor-sharp focus. I wanted to look up and acknowledge the audience, or look at Robert, but nothin'doin', I wasn't gonna slip up and blow it. Locked in. Objective: not to blow it. And somewhere in there, I was floating in it, having fun with it, grinning like a mad dog to it. All the practice with the video paid off; I took Albert d'Ossche's parts, which provide really cool chord combinations at specific points of the piece. It's also a highly rhythmic work, with very small gaps during which to sort of let your fingers stop and catch their breath. Robert was playing to me, standing close and grooving to keep the connection fresh and glowing. When we hit that last big rock chord and raised our pick-clutching right hands slowly and gracefully into the air, something inside suddenly went "holy cow!" and it's like I beamed into my own body right then and realized where I was and what I was doing. I appreciate things like this freely. The audience was highly appreciative as well.

And if that wasn't enough to send a guy to bed happy as a fruit bat, then Robert asks if I'd like to stay up there and do one of my songs by myself. I would've asked somebody to pinch me, but the only person standing there was Robert Force, so I wouldn't have believed it anyway.

Went with "Georgia Peach" which, despite not having time for a vocal warm-up and being tuned to the key of D, went about as well as one could expect from someone who had just gotten his mind blown. It felt good, it was comfortable, I dedicated it to Jae. Robert danced with a lady.

I left the stage to applause and ended up talking in a circle with a group of musicians and friends of the Dulcimer Shop, but so much of it was a blur. Maybe I was getting dehydrated and the 6,000 extra feet of altitude I was flitting around within was starting to have some effect on my faculties. In retrospect, the entire weekend was a solid mass of pulsing, fortified, natural water. As a spiritual and physical vessel, I am a sponge with immense capacity for run-off, which is to say, a lot of the experience simply washed over me. A full immersion. That's what I was aiming for. I've soaked up so much that I fear I'll simply bust.

And the blessings kept coming.
Posted by Bing Futch at 4:11 PM