Posted by Bing Futch at 7:28 AM No comments:

At one point in time on the current leg of tour, I was camped at Harmonie State Park in New Harmony, Indiana where you could look across the Wabash River and see Illinois. Now, a scant week later (even less), I'm at Trail Of Tears State Park in Jackson, Missouri, looking across the Mississippi River back at the state of Illinois. Of course, during this past week, I spent four days in Belleville at the Gateway Dulcimer Festival and had a great time. Not only did I get to hang out with Guy and Sharrie George, make lots of music and new friends and work in classes with eager students, but I also adopted a stray kitten that had been living in a corner of the parking lot. I named her Samantha Snows, partially after the character in "Bewitched", who is seen as a black cat in the animated title sequence, partially because she was discovered at Our Lady of the Snows Shrine.

Before this, it was back to Townsend, Tennessee for another fantastic day of workshops and a concert at the Pickin' Porch. It was a unique night, with not only Mike and Connie Clemmer performing as usual, but also featuring didgeridoo player Josh Carroll, young mountain dulcimer whiz Bradley Ellis and my buddy Butch Ross. Fun times all around!

Tomorrow, I'll head back to Tennessee for gigs in Nashville and Sevierville. Be sure to check the show calendar on this page for more info

From iPhone with love.

Posted by Bing Futch at 2:12 PM No comments: 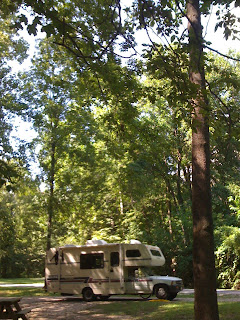 Posted by Bing Futch at 7:32 AM No comments:

Posted by Bing Futch at 5:41 AM No comments: