It's been a good week for jamming - I haven't been doing much of that lately. After sitting in with Patty Gates at Reilly's Lantern Pub last week for a sizzling rendition of "Bobby McGee", she mentioned to me another jam going on at Underground Bluz on Saturday night. Not putting two-and-two together (I'd performed there on this night before), I arrived and discovered that it was a blues jam.

Blues on mountain dulcimer isn't impossible, but it can be difficult due to the diatonic nature of the instrument. With the blues revolving around the pentatonic scale, you're hard-pressed to find the melody, let alone accompanying harmonies that will make your music sizzle. However, it can be done with a good load of string-bending and, if you're capoed at the second fret (key of F#), you can actually get the pentatonic scale and lay some smoky sweetness down.

Of course, it also helps to know your blues chord progressions - so even if you're playing in the key of E (capo first fret), you know that the blues is typically a I - IV - V chord progression.

With each key, there is a scale - and with each scale, there are degrees for each note. The degrees are represented by roman numerals:

I, IV and V are what's known as primary chords - the only major chords in the major scale, and usually the chords that are used for blues progressions. No matter what key you're in, this holds true.

So, in the key of E (which is the Tonic or I chord), you count up four notes in the scale (including the Tonic) and you've got A as your IV chord. One more to five and there's your B.

And don't forget that the Key of E has four sharps, F#, C#, G# and D# - so you've got to make some careful choices, even if you're barreing the chords, for soloing.

In any case - blues is not a real strongpoint for me, so I resisted the urge to quietly slip out into the night. Especially after enough people had seen me tuning up and wanted to know what the hell I was playing. Angelique has never been known for her huge voice and this was an all-out jam, better suited to Halcyon's solidbody sound, but I found a break in the action between sets and went to do a little demonstration of some swamp blues with "Cluck Old Hen", just to mix things up from the big Chicago sound that had dominated the evening up to that point.

Imagine my dismay when I couldn't get any sound out of her - realizing that I had left her plugged in all day while practicing and drained the already fatigued battery! No worries, for a shallowbody, she's got a pretty decent voice, so I just had them mic her and I went ahead with the jam, which was raucously received.

There were quite a few familiar faces and talents there, like Kristen Hart and Roger Zimish, who had in mind a little experimental free-associative jam with the dulcimer. So, a fresh battery and a jewelers screwdriver was located, Angelique was re-energized and I hopped in with Roger and crew to do some crazy jamming on a spacy tune in D and then a bluesy rocker in the aforementioned key of E. I was plugged into a Kramer 412 that had some seriously nasty power behind it - but I resisted the urge to go nuts and kept it in the pocket, carefully experimenting with my lead licks; I knew that Roger would toss the ball my way at some point, and when he did - I had found a nice little combo to work over the chord changes. After it was all said and done, event promoter Straycat said to me, "now I can say that I've heard Stevie Ray Vaughn played on a mountain dulcimer!" Wild good times. And recorded for posterity somewhere - I'm going to work on getting ahold of that.

There's another blues jam tonight - and I'm looking forward to mixing it up again, though I'm stuck on whether to bring Halcyon or not. One one hand, her humbucker pickup gives her a bold and brassy voice. On the other hand, her fretboard is too shallow for me to use a capo, and that's a serious setback. I think Angelique is up at bat again.

At least I know she's got a fresh battery.
Posted by Bing Futch at 2:28 PM No comments:

If my web statistics show correctly, it looks like people, in general, like to watch more than they like to read. My two video portals, The Dulcimerica Video Podcast and my YouTube page get the most traffic out of just about all of my websites. God, I love statistics.

And in thinking through some workflowy thoughts, I suddenly came to the conclusion today that offering live video lessons would be a good thing to do. So I'm doing it.

Actually, I've been talking with a soon-to-be-student about doing some lessons via video, and these would be of the TDVP variety, recorded and then sent out. But then I thought, "hey, wait a minute..."

So, check out the page at my website, which also has undergone a slight bit of updating to sort of accomodate the growing and changing times. It's under video lessons.

Tonight, I think I'm heading down to an open mic to start testing out material for my opening set with Scott Ainslie in a couple of weeks.

I've also got to demo a version of the left-behind song "Music" for Mohave, as we gear up for a recording session at Full Sail and begin looking at playing out again. We've already been getting inquiries from folks in the past who have booked us - so it's definitely time to get thing shakin'!
Posted by Bing Futch at 6:35 PM No comments:

It's been a busy couple of weeks. If my bulging calendar is any indication, it's about to get a lot busier, so I'll take some time here to catch up a little with what's happening in the dulcimer community from my corner of the world.

Subscribership is booming - thanks to everyone who's downloading video and checking back for new episodes. The latest entries are a reminiscence of last summer's Mountain Music Festival in Manitou Springs, Colorado. This is where I met the inimitable Robert Force and had the sublime opportunity to join him onstage during his performances at the festival. This is recounted through still pictures and video, courtesy of Rick Laurenzi and Richard DuCharme, who were both in the audience. Thanks guys!

Back to today (today IS today, isn't it?), I've been getting some really great topic suggestions for upcoming episodes of the podcast which I will incorporate. If YOU have something you'd like to see covered - send an e-mail to me at bingfutch@yahoo.com.

I've been chatting with Stephen Seifert these past couple of weeks. We're both tech-heads and are always looking to do something interesting with the technology that's becoming available to us; through his Mountain Dulcimer Folk Podcast and through TDVP. It looks like we'll be doing some cross-promotion through our individual podcasts for the other, and anyone else who wants to join us is free to submit either an audio or video ad to be shown or played during our respective shows. It's all part of an effort to raise awareness of our various endeavours, and to underscore the fact that there is no competition between these unique features in the dulcimer community. Quite the opposite; the more productions like this, the more people will come to know and more deeply appreciate the mountain dulcimer - which is, of course, what we want! Stay tuned for more info on some plotting Stephen and I have been doing regarding Kentucky Music Week and our laptops.

This past Friday and Saturday brought out a sizeable crowd to Mt. Dora where workshops, jams, open mics and a wonderful instructor concert engaged folks from all over. I only attended the concert (bein' sort of short on change at the moment), but got to hang out in the Memorial Garden outside the First United Methodist Church of Mt. Dora and do a little jamming and meeting with folks from Everything Dulcimer and my dulcimer group, Dulcimer Central, as well as meeting new friends and catching up with Jean Ritchie and her husband George Pickow, and sharing some laughs with Don Pedi. Here are some stills from the Saturday evening concert: 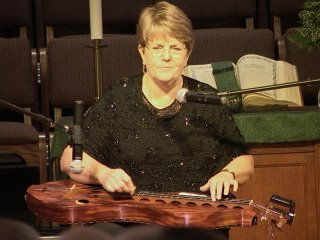 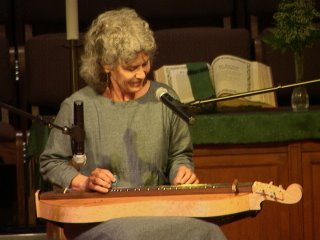 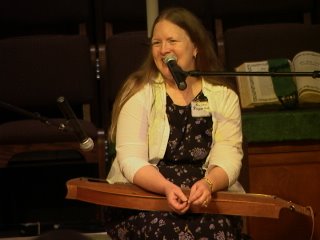 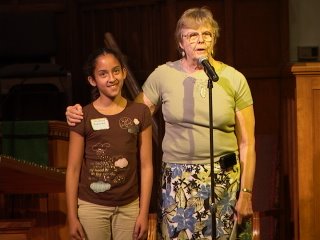 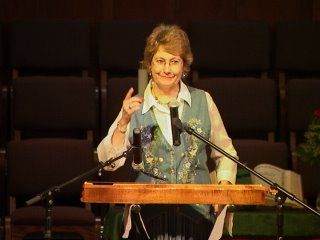 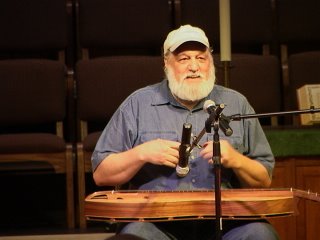 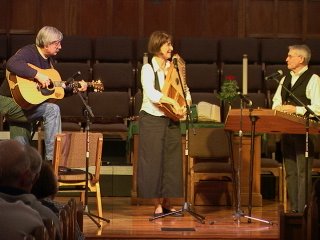 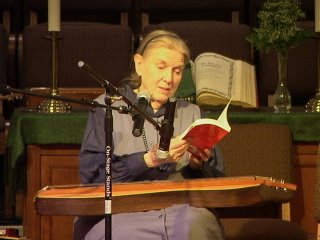 I'd like to share a response to an e-mail that came all the way from Japan! The question had to do with my dulcimer track "Raga111806" and the tuning that I use to emulate the middle-eastern sound. You may be surprised to learn that it was actually performed in DAD tuning!

In regards to the Raga recording that I did - that was done in DAD, actually, melody played on the bass string starting at open D and then walking up from fret 2 or F#.

then playing higher on the fretboard

like, the lick from F# (9) to D# is a bent 7 (D) and I'm bending it before I actually hit the note. I'm also not really hitting it as a perfect D#, since the middle-eastern scale includes quarter tones - so a "not quite" bend is in order there, along with some tremolo that can be attained by wiggling the string back and forth as you bend it.

You can also do the same thing in improvisations with the 5 (B) and bend it for a quarter tone between B and C (6) since C is actually a half step up.

Aeolian tuning (D-A-C) on its own is more Celtic sounding, but if you Capo it at the 1st fret (Aeolian E), then you get some really cool middle-eastern sounding runs (with bends in mind) if you include the 6+ fret.


Hope this helps a bit - I'm still sort of wandering about in the land of modal tunings, myself - and there are some really wild sounds you can get by exploring these lesser-used modes like Phrygian (D-A-F) and Lydian (D-A-E). A good resource for tunings and application is Steven K. Smith's site at: http://www.sksmithmusic.com/ and Jerry Rockwell's site at: http://www.jcrmusic.com

Speaking of modal explorations - I've been toying around with the Locrian mode this week, which is a great mode for playing the blues. You can enter this mode by tuning to D - A - Bb or by placing the capo at the second fret, effectively putting the dulcimer into the key of F#. I'll post on this more at another time - probably after I've actually worked out a couple of blues tunes to better demonstrate the process. In the meantime - have fun and keep strummin'!
Posted by Bing Futch at 11:49 AM No comments: