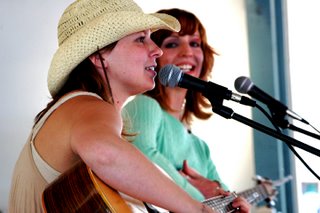 I rolled into town a little after noon, noticing that the population of Manitou Springs had increased slightly and the sidewalks were beginning to fill up with people, doing this and peering at that. Attendance had been pretty good the previous day, violent hailstorm and all. So a bright and sunny Colorado summer Saturday would be gangbusters.

The first three acts of the day had been second sets by Bruce & Friends, Cripple Creek and Robert Force. I felt a little guilty about missing the shows, but figured everybody would understand the sublime urge to go scooter-tooling around the Garden of the Gods on a shiny morning. The afterglow of performing "Wellyn" with Robert was still doing little hippie dances in my brain and spirit. I figured that sometime during the day, we'd need to get with Bud Ford III and put our heads together about Sunday's set.

The timing was perfect. Rolled up to the covered stage at Soda Springs Park to find Xanthe & Setti cranking into their set. These two young ladies were knocking the crowd out with their sweet, tightly-layered harmonies and textured guitars. They'd look at each other occasionally, as if to assure each other that they were doing alright, then they'd slam it into fifth gear and the crowd would go bonkers again. The tunes were great folky Americana tunes with even a murder ballad or two thrown in for good measure. Folks love murder ballads. Murder ballads and songs about people about to be executed. It's true. I bought a CD. I love that kinda stuff. 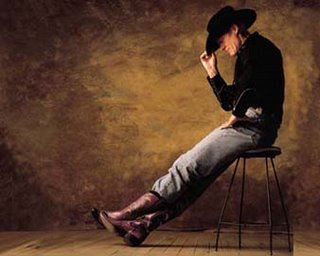 So does Chuck Pyle, who came on next. Chuck's a huge dude, as one of my Key West friends would say. His songs have been recorded by Jerry Jeff Walker and the late John Denver; he's performed at the house of Bill Gates. And his set was simply stunning; a masterful mix of story weaving, spoken word, sparkly guitar and songs of playful complexity sung with a warm, husky familiarity. The pavilion chairs filled up and Chuck kept it low-key, but captivated everyone.


I caught some more of Chilly Winds and really enjoyed their harmonies and song arrangements, so I stayed for a few before noting that they'd be performing right before Robert's evening set (which I wasn't going to miss for all the dogs in China) and, once again, the spectre of coffee raised its steaming head, sending me walking in search of a cuppa. Little did I know that things were about to turn ugly again, meteorologically.
Posted by Bing Futch at 8:31 PM