"All Over The Map" Now On Sale!

Final proofs have been submitted and my first songbook comes back from the printer tomorrow. "Dulcimerica: All Over The Map, Volume 1" is a twenty song collection of mostly original tunes with some unique arrangements of traditional and popular music as well. The songs included are:

This Road This Moment*
Gold Trails Hotel
From The Hills To The Sea*
Summer At The Fair*
Seminole Solstice*
Amazing Grace (Miles To Go)*
John Henry
Swing Low Sweet Chariot/He's Got The Whole World In His Hand
Juke Joint Hen (Cluck Old Hen)
We Shall Overcome
I Cried For Days*
Sandy River Elfman (a spooky version of "Sandy River Belle")
The Pirate O'Reilly*
Please Bury Me By The River Shannon*
Old Yeller
Theme From "Jurassic Park"
'Tis Only Faire*
Sunday Morning*
Minutes From Manitou*
Garden of The Gods: A Suite For Dulcimer*

Songs with an asterik denote completely original tunes, and there is a fair amount of improvisation in many of the others, so you won't find much duplication in this collection! There are also a number of photographs spread throughout that I took while on the road writing many of these songs, and the text that ties the book together tells stories behind the songs along with shedding light on techniques for interpretation. The book begins with a visual description of musical symbols used on the pages.

The book is spiral bound on heavy-duty 60# paper with a full cover glossy cover totalling 74 pages. There will be a companion CD made available at a later date; probably by mid-summer. I decided to sell them separately as an either/or/both deal, to keep the book price at a low $19.99.

Reserve your copy at:

This is a very fun book to play through, with something for players of every level. Each song features both standard music notation with chords as well as tablature. The one exception is "Garden of the Gods", which is a classical piece that does not have chord markings, but rather features all of the parts within the staves. So not only mountain dulcimer players can utilize the book, but also hammer dulcimerists, pianists, guitarists, mandolinists, harpists, flautists and anyone who reads music. The tablature is strictly mountain dulcimer, however.

This is a collection of songs that I'm proud to offer from my heart and musical spirit. Thanks for your time and consideration!


Bing
Posted by Bing Futch at 1:51 PM No comments:

Bing Futch has been making music on the mountain dulcimer for a long time. As a front man for the Americana band, Mohave, he has demonstrated a unique playing style that incorporates tribal rhythms from African and Native American influences as well as Celtic and early mountain music. His technique is equal parts traditional and experimental, with a fondness for playing in DAA tuning. He also plays electric dulcimer with the band as well using distortion, delay and various digital effects to create a sound that has been described as "musical Tabasco" among other things. Mohave has performed at Walt Disney World and opened for bands such as the southern rockers Molly Hatchet and the classic doo-wop group The Crests. That's a pretty impressive resume but it doesn't really prepare you for his latest album which is solo dulcimer with no electronic gimmicks at all. The only "extra" is some fine harmonica playing by Charles Stansell. Bing is a relly fine player with an eclectic taste in music that takes him from "Polly Wolly Doodle" one minute to "Somewhere Over The Rainbow" the next. "Dulcimerica, Volume 1" is a real treat that showcases Bing's excellent playing on a wide variety of material, including several originals.

Thanks for THAT Neal!!!!

Posted by Bing Futch at 8:22 PM No comments: 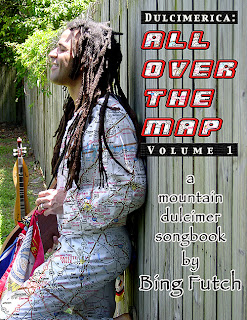 Here's the cover for my first songbook, titled "Dulcimerica: All Over The Map". Yeah, I decided to ride with the Dulcimerica theme, because it connects everything. The music, the video podcasts, the book, the concept that this is an American instrument that has international reach. How many truly American instruments are there anyway? I'm not sure. But I'm sure of this one.

The book has twenty tunes, most of which are originals. The rest are my take on traditional tunes and some more modern compositions. It's not a terribly difficult book to get through, there's a little something for everyone in there, from the easy-to-play to the sit-back-and-go-whoa. I'm offering it by itself to start - and will make a CD available probably later this summer as I get all the demos recorded.
I'm very, very excited about this and the proofing is being done right now, with my lovely wife Jae poring over the first printed copy. Exciting stuff!

There's been quite a lot of recording going on, amidst all of this other hullaballoo - Mohave is playing this Sunday at the Central Florida Fair and we've got rehearsals all this week. Been a long time since the band played out and the line-up this time around is stellar, with Mark Kring on bass, Roger Zimish on guitar and Kristi Kief joining us once again on drums and steel pans. We're really looking forward to a fun show on Sunday night, 7-10 pm on the Community Stage. Plus fair food. Yum.

I'm also recording some more tracks for Mizieya's upcoming album and while that was going down, I realized that I'd never attempted a version of "Wellyn", the tune that was made famous by Robert Force and his late partner Albert d'Ossche'. So, I experimented and cut a quick demo of it and sent it off to him. Here's a sneak peek:

It's just a classic tune for not only the mountain dulcimer world, but music in general. I didn't want to change it too much from the basic two-dulcimer arrangement - so I retained that, of course, but I did rock it out with drums and bass, along with some extra distortion for a good head-bobbing effect.

I've got another collaboration on deck, this time with a musician from Baghdad, Iraq. His name is Feter, and I'm really looking forward to working with him - he's an amazing talent and totally inspired. I am in deep awe that he is able to be so upbeat and creative with all of the hell and chaos unfolding around him. When that work is finished, I will post a link to it here.

The Kentucky Music Week website now features the promo video that I put together, shot mostly last year at the event. The clip shows what fun KMW is and also shows many of the teachers, including myself, who will be there this year. There aren't many video outlets for the dulcimer world online, so I think this will be an eye-opener for a lot of folks, and hopefully, will increase attendance at this year's event.

One of the things I've wanted to do with the mountain dulcimer is to bring some more ethnic music into play. I love the old-time mountain music and European tunes from the U.K., and I love to rock out as well, but I've been consciously trying to learn songs of other cultures, including African, Native American, Polynesian, Asian and Indian music. Right now, I'm working on a medley of tunes that is really a small smorgasbord of languages, requiring me to learn not only new music, but new ways of singing as well! The trilogy of tunes includes:

"Kâua i ka huahua`i" - also known as the "Hawaiian War Chant" (though it's really a love song, and not about war at all.)
"Ue o Muite Aruko" also known as "Sukiyaki", originally sung by Sakamoto Kyu

and, inspired by something that happened yesterday, "Big Alligator" - a song by Chief Jim Billie of the Seminole Tribe.

Kristi, who is moving to Australia soon, is a gator wrestler at Gatorland and enlisted me in putting together a video so she can get a job at the Australia Zoo when she gets down there. So, while shooting yesterday, she offered to me the chance to wrestle an alligator; that is, sit on its back for a picture. Or so I thought.

All of the tourists she instructed to keep the gator's head held back, so it wouldn't go anywhere. She'd keep its head up until they had gotten it, and then back away for the photo, then take control again once they, er, disembarked. However, when I got on this old boy's back, she first had me hold his head up, which I did with little to no style, with my thumbs hanging over the edges of his jaws. She noted, over the microphone in the arena, that I could've lost my thumbs right then "and how would you play dulcimer?" I replied, "by using only my fingers!" Then she said, "put your hands on his neck," which I did. Of course, the gator then began crawling slowly back towards the water as Kristi exclaimed, "c'mon Bing, stop him."

Well, that wasn't happening. Try as I might, he was an unstoppable force, and as I attempted to be man enough to make this gator cease his motion, this picture was snapped. Just another day here with musicians in central Florida. 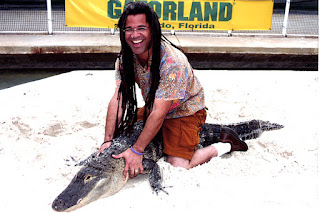 Posted by Bing Futch at 8:19 PM No comments:

Love Was Comin' Through

Quintin Stephens is spearheading an effort to do a Mimi and Richard Fariña tribute album, which he's pitched to Robert Force. I hope we end up doing it - as he mentioned in his e-mail, it could be a new Pacific Rim Dulcimer Project along with bringing more attention to the Farina's music. He asked me what tune I'd be interested in covering and, with no hesitation, I said "The House Un-American Blues Activity Dream." Buddy, we're about to indict.

I began a new song yesterday and finished it today. It's deep. It works on many different levels. Here are the words:

love was comin' through
music and lyrics by Bing Futch

father
what's that you're smoking?
father
I need to know
father
I was only joking
I don't really need anything anymore anyway

father
what is your mission?
father
what was your crime?
mother
got away with murder
I don't really need anything anymore anyway

cause I got love
sweet love I found
she lifts me up
when I am flat on the ground
do you remember
how it felt to you
when love, sweet love, was comin' through

father
why should I believe you?
father
where should I begin?
mother
says I need a reminder
I don't really need anything anymore anyway

father
what's that you're saying?

Told you it was deep. The music is loosely southern gospel - and I'm working up the charts right now to get some players onto it and working it proper. More to come soon.

Posted by Bing Futch at 9:00 PM No comments: