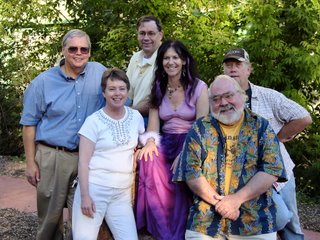 Cripple Creek took the stage around 7:30 pm on Friday evening and it was the first time that I'd heard them. Prior to that, I'd only heard Bud Ford playing the tune "Cripple Creek" on the Mel Bay Dulcimer 2000 CD that came with the matching book which KWL from Everything Dulcimer gave to me. That said, the band was great - with lots of delicious harmonies and acapella breaks that gave me goosebumps. Their folky songs ranged from silly to socially conscious, a nice mixture for the crowd that was assembled.

Knowing that I would be able to see them a few more times over the weekend along with Michael Johnson and Bob Haworth, I politely waited for a break between songs about halfway through the set and then walked through the back of the park towards the south end of town. Earlier, I had spied a few places that seemed like good spots in which to soak up the local vibe and I was starting to feel the effects of nearly 24 hours awake, having been through the brain drain of an airplane flight and then the added shock of being a mile closer to the sun than usual. A cup of coffee with additional defibrillators of espresso; that would keep the body moving.

Eventually, I reconnected with Bud Ford III and we decided to go back to Casa de Laurenzi for a little jam session which ended up being not so little and lasted until 1:30 in the morning. Bud and I are kindred spirits, so hanging out with him is easy. He's also a super-talented dulcimer player who pushes himself relentlessly to learn new songs and techniques on the instrument. So as we shared songs in Rick's living room, the flow and exchange of ideas was almost dizzying. At some point in time, I sagged back onto the couch and mumbled something about "lunging upstairs" and "falling into bed" while bidding him a fond adieu. House guests were gathered in the kitchen and I wished them a good night before heading upstairs. I'm not sure what the conversation was about, but during the weekend there was a good amount of talking amongst fellows (it was pretty much a fraternity, nary a woman to be seen in the quarters) and it always seemed to be about Life. Good conversations. 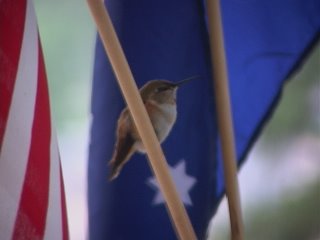 Having left my cel phone at home, like a moron, I had no alarm clock or time piece, so I figured on waking up when my overstimulated body and mind were damn well ready. As it turned out, this was a lot earlier than expected.

I awoke to the buzzing about of hummingbirds outside the open window of the cozy and well-lit room. After getting a good morning into everybody and meeting artist Chris Dysart, one of many people that I had the pleasure of visiting with over the weekend, I hopped aboard the silver and black Yamaha Vino that would be my angel wings for the next few days and headed out in search of breakfast. With no particular map in my head of where one might find something breakfast-y or even muffin-y, I slipped down the steep incline that is Washington Ave. and turned onto Manitou Ave., letting my invisible divining rod do the work and squinting into the bright morning sunshine. Blues skies. A few fluffy white clouds. Cute little town unfolding on either side like two funky ribbons as I glanced at the scrolling landscape and put on the brakes ever so slightly at the sight of food.

Too fancy. Too taco-y. Too boozy. That doesn't even look open. And then, suddenly, I see Ned's On Manitou in my line of sight and it just looks like a good time for breakfast, so I pull up to park on the sidewalk and who walks up but Erin Ford. Well hell. Now I know I've picked the best spot in town to have breakfast. Locals know these things.

After some chorizo and eggs with a tortilla and big-ass latte with double espresso love, I picked up a t-shirt ("I got fed at Ned's") and headed back outside; it was time to restart the mission. Destination: Garden of the Gods. It brought an exclamation of "ooh!" from my lips as we passed it coming in from the airport and Robert Force had talked about hanging out there and playing a little dulcimer. It sounded like a killer place to meditate and be still, knowing God, that sort of thing. The weather was threatening to be a bit wet. A sudden and violent microburst storm on Friday afternoon sent torrents of muddy water cascading down the mountain and dropped astonishing amounts of peanut-sized hailstones all over the place. Not knowing what Colorado weather patterns are normally like, I wasn't going to take the chance of missing out on this treat in the daylight. Without it raining on my head. 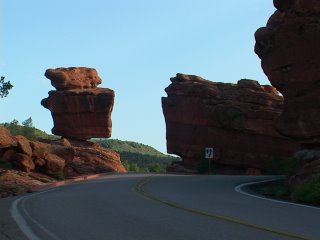 Throughout the morning, I had collected a startling amount of data that added up to something which might've been scooter-friendly directions to this place. Surprisingly, as I left Ned's and went shooting down Manitou Ave., left turn at the Sinclair, right turn on El Paso, left again and in less than five minutes, I was riding straight towards world-famous Balancing Rock.

The stunning rock formations within the Garden of the Gods is a result of being smack in the middle of two faults: the Rampart Fault and the Ute Pass fault. During the Laramide Orogeny (a period of mountain-building millions of years ago), a combination of earth and water slowly did the hula and resulted in massive uplifts of red, yellow and beige rock that slant at different angles throughout the park. 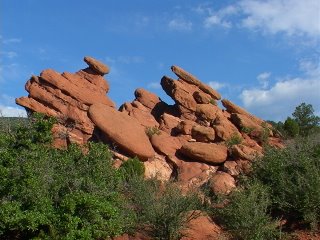 All of this history was lost on me, however, zipping along on the ribbon of road, tongue lolling out of the side of my head like the happiest dog on earth had gone Motoguzzi. It was incredibly beautiful. With my dulcimer case catching the wind like a minor sail, I eyed the fuel gauge; half-full, an optimist would say. Not sure how long it would take to see it all, I cranked the throttle and resolved to go for the gusto, see it all, just in case I wouldn't make it back on Sunday.


Siamese Twins. Cathedral Spires. Three Graces. Siltstone and shale, Lyons and Dakota sandstone, gypsum and red clay. Kissing Camels. Cathedral. Sleeping Giant. High Point. From place to place I sped, slowing down or stopping to gape, shut off the motor and listen to the wind whistling over surfaces and through brush. The visitor's center, looking suspiciously like the one from "Jurassic Park", was a good enough place for a bathroom break before shooting around the east side of the park and finding that it wasn't very large at all. If I was able to come back, I'd spend a little more time hanging out. 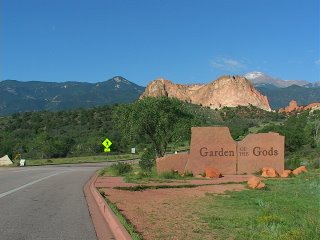 After hiking a short way off of a trail and finding a nice secluded spot in which to chill, I raised a silent prayer that Sunday morning would be weather suited to communing with the spirits.

With each new minute, it seemed that more tourists were beginning to show up, so I saddled up and headed out, back towards town where I was looking to catch some more music at the festival.
Posted by Bing Futch at 6:01 PM