Pike's Peak
Originally uploaded by dreadmon.
Less than 24 hours ago, I was riding a scooter along in the brisk morning chill, winding around the curves that weave through the Garden of the Gods at the base of Colorado's Pike's Peak. Now, I'm back in Florida with Tropical Storm Ernesto making a wet and woolly beeline for Orlando. How's that for extremes?The trip to Manitou Springs was everything that I had hoped it would be; pure magic and great times. The Mountain Music Festival was a blast, great performances all around and real "A" list stuff! Manitou Springs is an endearing little town, blessed with a certain kind of magic that's hard to place. It's not just the artsy culture that exists there or the friendly and laid-back people, and it's not just the beauty and majesty of the landscape combined with the healing properties of the mineral springs that run down from the mountain; it's something else. Some kind of energy that fairly sets your body to humming. Or that could just be me trying to breathe differently at an elevation of some 6,000 feet. It's like having a cat sit on your chest as you try to sleep. 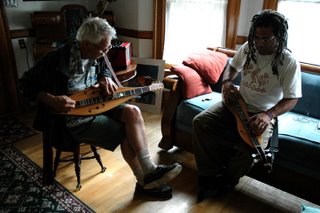 So, the setting for this amazing weekend is pure heaven anyway, then add to that a dream come true; finally meeting the Fords and visiting the Dulcimer Shop. Does it get much better? Add Robert Force to the mix and the whole reading goes off the chart. I could blog thousands of words which would come close to almost beginning to approach resembling, in some small way, a reasonable impression of what the experience was like, but without going all Michener on you, I just don't see it happening.

Meeting Robert was a pure joy. Literally, within minutes of our meeting, we were seated in Rick Laurenzi's living room making music. Unbelievable.

I had hoped, you know - to maybe steal a bit of his time and play "Wellyn" with him, chording the late Albert d'Ossche's parts, or to sneak in a brief jam or something. Hell No! Not only did we play "Wellyn" (with Michael Johnson looking on!), but we jammed for over an hour straight. Some of my stuff, some of his stuff, some stuff that came from out of the atmosphere and in from the spiritscape; my only regret is that we didn't record any of it. Rick got plenty of pictures though. Three of us were staying at the cool old house that I call Casa de Ricardo, which was built in 1893 and was the abode of a former mayor of Manitou Springs. Robert and I and Michael Johnson, who had a big hit in the 80's with the song "Bluer Than Blue" and also performed with John Denver. Rick was a fabulous host, a highly interesting man with a sweet spirit and oodles of creative talent. The atmosphere in the place was super-charged with love and some of that magic I was talking about earlier.

Bud Ford III stopped by in the early afternoon to drop off a scooter for Robert to use over the weekend. We had talked briefly online through MySpace, but had never met. As it would turn out, Bud and I hit it off like gangbusters (and for some of the screwiest reasons - perhaps more on that down the road) and did a little jamming before he took Robert downstairs to demonstrate how to operate the scooter (he works at a scooter store.) After awhile, it was realized that the first musical act was about to hit the stage down at Soda Springs Park. So Bud excused himself to head for work while Robert and I hopped on the scooter and wheeled down to where the action was at.

Bing has it right on about the time, the place, the event, and most importantly, the spiritspace connections that ebb and flow through the people who chance upon Manitou Springs and its folk festival-- or rather-- its folk music celebration. It was my honor to meet and play with such a creative talent as Bing. Those of you who know him also know that his music is but one reflection of his creativity-- he paints on the canvas of Now in the colors of Life.
Robert Force