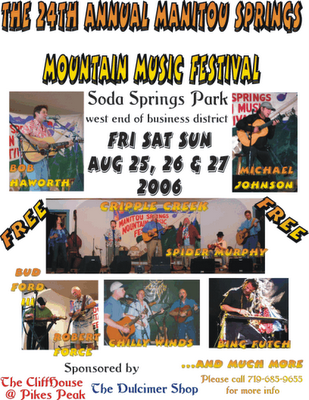 Having just recently leaped into the rushing stream that is this country's grass roots music scene, I find myself succcumbing to drooling fanboy-ism every now and again. Keep in mind that, for many years, I had no idea who Bud and Donna Ford were, besides two people who made beautiful wooden instruments and ultimately signed my checks when I worked at the Dulcimer Shop's location within Knott's Berry Farm theme park. It wasn't until about ten or twelve years later, with the birth of commercial internet, that I was able to fully grasp how wicked cool that was.

And maybe it was better that I sat out there on the outskirts of the wooded camps and bonfires blazing with the sounds of flamin' mountain dulcimers in the sky (thanks Tull, for cementing that within my head for now and eternity). It was just me and Dulc. Two instruments, one tuning. DAA. And it wasn't even DAA, because I tuned down in order to facilitate my baritone voice. CGG.

In any case - by the time I had jumped into the scene care of The Lippy's Dulcimer Central group, where I finally had other dulcimer players to socialize and jam with, the dulcimer and I had shared many roads together and were comfortable in one another's company. Then DAD tuning came along and effed all that up, so it was like starting from square one; no repertoire, no originals. Curses!

Kidding, a gentle kid. So the trips out to Kentucky and now Colorado are the kind where you spend the whole time grinning your ass off because you just can't believe your good fortune be doing the very thing that you're doing. Talk about kid in a candy store. It's like going to stay with someone up north during wintertime, waking up and finding snow on the ground, running out to lay in it and play in it, meanwhile all the neighbors are sayin' "they're not from around here, are they?"

That'll be me in Colorado. Just silly smilin' and pinching myself.

Here's a clip from Kentucky Music Week. The tune I play is called "Gold Trails Hotel", named for the building in which the Knott's Dulcimer Shop was located. It's a musical hodgepodge of "Cripple Creek", "Old Joe Clark", "Ragtime Annie", "Cumberland Gap" and Jah knows what else, all served up and diced together with a low-key "Somewhere Over The Rainbow" ending. Tim Carnahan, my manager at the Dulcimer Shop, taught me a few of those, I arranged the others into a demonstration tune that I'd play probably 100 times a day while selling dulcimers to park guests.
Posted by Bing Futch at 9:24 AM