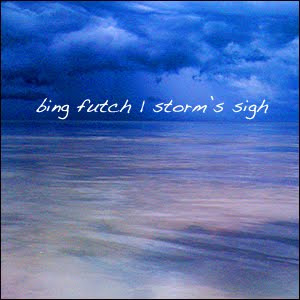 Listen to a 7-minute sampling of all 9 tracks!

I do a lot of recording and about 90% of it just sits on the hard drive and waits for re-tooling. The other 10% gradually takes form and turns into albums sooner or later. This summer, I've been busy tracking for "The RV Project: Official Album" and, of course, I've been working on songs for "Dive!" now for about two years. Where this one snuck in, I have no clue, but I've always wanted to do an album like "Storm's Sigh." It's an all-original, instrumental recording that was, at first, going to be called "Calm Before The Storm" because it represented such a mellow state-of-mind before the absolute insanity that "Dive!" will present.

The tracks are a mixture of tunes that I've written and also ideas that were improvised in the studio. There are inspirational nods to such "space-music" kings as Ray Lynch and Steve Roach, both of whom were pretty influential in my early music career. "Storm's Sigh" also features a re-visitation of the title track from my 1987 release "The Girl and the Book", which could rightly be seen as the very first atmospheric instrumental record that I ever produced. This new release combines mountain dulcimer, Native American flute, percussion and very unapologetic synthesizers. In fact, this is not a mountain dulcimer record so much as it is simply a Bing Futch record that features mountain dulcimer. But there it is, front and center in sparse arrangements, albeit garnished by copious amounts of synthetic bits and bytes. What's key here are the wide-open spaces and melancholy melodies that have always been a hallmark of my non-dulcimer music. Much of this is accomplished with chromatic mountain dulcimer - though a good portion of what you'll hear is all done on standard instruments. The link above features a 7-minute .mp3 file containing a snippet of each of the 9 tracks from the release.

The record will ship beginning Wednesday. Being home for four weeks allowed for the completion of this record - and now, I've got 7,000 more miles to travel on THE RV PROJECT TOUR, which re-launches on Friday, September 16th. More updates soon!
Posted by Bing Futch at 4:52 PM No comments: