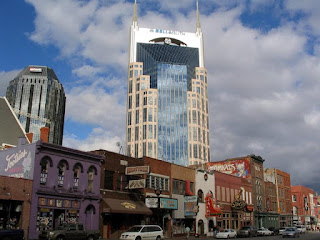 They don't call it "Music City" for nothin'. After our Thursday jam at B.B. King's Blues Club, I was ready for even more jam action and found exactly that while in town for Summer NAMM.

Friday was mostly spent demoing dulcimers at the Folkcraft booth, taking only a 30 minute break to hang out with Jae and to eat the largest hot dog I've ever had. That evening, we headed out to La Hacienda on the recommendation of Nashville songstress Ashley Robertson.

Saturday, wasn't scheduled to be in the booth, but wanted to catch Stephen Seifert at the NAMM U. Breakfast Session as he performed with Fiddle and Pick. Later, we had the rare opportunity to jam a few songs out in the Folkcraft booth, from Bob Marley to the blues. Lots of folks, including NAMM Logistics Manager Cade Fulton, were there to watch the fun; lots of cameras flashing, so those pics are bound to start showing up someplace.

After hanging out for a little bit, Jae came down to meet me and we went down to famous Broadway to sample some of the music at the venues. Nashville's live music starts early in the day and doesn't quit until early morning, so there is fantastic A-list entertainment up and down the street 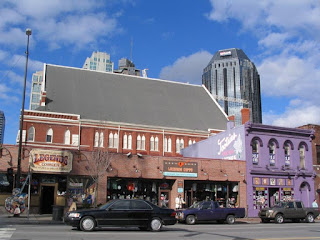 We didn't get very far - ending up at Legend's Corner and being highly entertained by Jason Link and the Link Family Band. Energetic, engaging and easily the most fun band we saw all day, Jason and Co. quickly latched onto the fact that I was a musician in town for NAMM and asked if I'd like to sit in with them on a couple of tunes. Since I didn't have my axe, Jason mentioned that they'd be playing The Stage on Sunday and that I was invited to join them for some jams. Of course, you know my answer was "hell, yeah!" The band, comprised of Link, Tim McDonald, Woodstock 69 and The Chef, were a great beginning to our stroll down Broadway and we bought two of their CDs before heading out to experience more of this famous district. 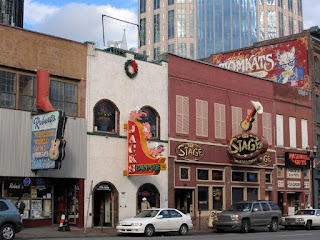 Just the history alone is staggering as you walk down the block - everything from record stores and eateries to venues with walls that are lined with old album covers, autographed pictures, paintings and oversized musical instruments. Every band we heard had top-notch players, though not all of them were as entertaining as Link and his band. On Broadway, the bands all work for tips, which means you've got to be good to survive. Certainly ups the ante' when you're trying to keep people in the "bar whar you are."

Jae bought a black and silver cowboy hat at the Ernest Tubb Record Shop and we popped in and out of bars until it was time to meet up with everybody at Sole Mio for dinner, which was excellent. 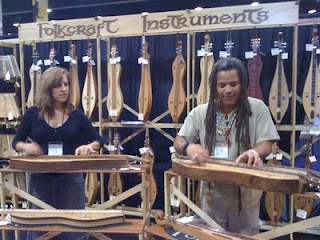 Sunday on the floor at NAMM brought many more wonderful moments, including some hot-fired jams with Linda Sack of the Nashville Dulcimer Quartet. Linda and I had conversed some via e-mail and it was a joy to meet her. Our dulcimer duets once again brought a crowd to the Folkcraft booth, stopping traffic in the aisle, which was the main entrance to the show floor. Stopping traffic is a good thing. It gets people very curious as to what's going on in front of that crowd. 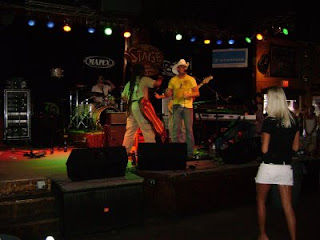 The show closed at 4 pm, which gave me the opportunity to slip out quickly, head down to The Stage with Jae and chill out with Jason Link and the Link Family Band. Several folks that I met at NAMM were there to check out my brief sit-in with the band. With a need to get Annie back into Richard's hands for a trip back to Indiana, I could only stay for a couple of tunes, so Jason brought me up with an introduction and I quickly laid out for the band what I had in mind. In no time flat, we were rocking along with "Run On", which hangs out in Em for a good long time, so it was easy to signal the band to stop and start for emphasis. Keyboardist Tim McDonald took some crazy middle-eastern sounding solos and Woodstock 69 laid down a wild bass break-down before we brought it home. The blonde you see in the photo was dancing her ass off, despite being soused to the gills. 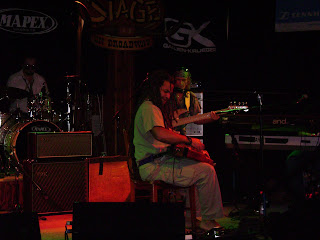 Then, we switched it up with "Folsom Prison Blues" in the key of D and the blonde disappeared, replaced by an older gentleman who danced just as madly, holding a drumstick in his hand. Annie sounded fantastic going through Jason's rig, just enough dirt to take on a wicked tone. Though I was sitting down, I made sure to turn around and give plenty of visual cues to the band - I could see them watching my fingers for the changes. Without a single rehearsal, we all stopped on a dime to wild applause as I shook hands with the boys and thanked them for allowing me to share the music with them.

I ran Annie back to Richard, said goodbye to him and Nick, and returned to The Stage for the rest of the show. Had the chance to hang out with Woodstock 69 (real name: Rande Hall) and talk with him about the Nashville music scene, the caliber of performers and the nature of the grind. It was a back alley inside view at the heartbeat of their local scene and deeply inspiring.

Jae and I had dinner at Merchant's and then retired to our hotel room where we both crashed out, happy yet exhausted. We had barely enough time to really dig into Nashville as a whole, but just that brief foray into the city yielded unexpectedly fun and wild results. Made a lot of new friends, created new connections and came away with the undeniable feeling that we'd be doing it all again next year, if not sooner.
Posted by Bing Futch at 12:55 PM