In The Nashville Groove 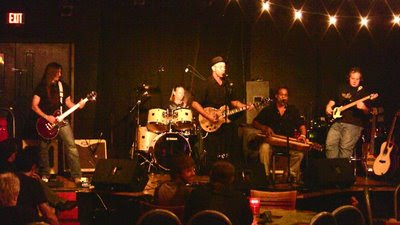 We dropped into Nashville in the mid-afternoon, grabbed a couple of caffeine-laden drinks from Starbucks and proceeded to our hotel, Jae and I. It was a long day of travel and was going to be a long night of heading out to B.B. King's Blues Bar downtown and waiting our turn to play the Greg Bennett Guitar Showcase. Roger Zimish has an endorsement with Bennett and we wanted to work some of our acoustic alchemy. During dinner, we were entertained by Tommy Tutone in the main room - they did a swing version of their hit "Jenny", which was pretty sweet.

Roger, me and guitarist Barry Hall planned on rocking out "Run On" and, by the time the evening had drawn on and on, turns out that's the only tune for which I hit the stage. With no rehearsal and a pick-up rhythm section, it was a monstrous go and quite a lot of fun. Annie's first time on-stage since being shipped back home as her whole self. 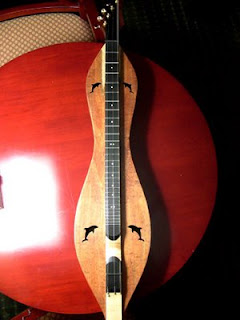 Annie now has a little sister named Kamalani, which means "chief's child" in Hawaiian. Kamalani is all Koa wood, which can only be found on the Hawaiian islands, with sugar maple fingerboard and ebony fingerboard veneer and heelcaps with backing stripe. She's also fully chromatic, which means I've officially crossed over to the "dark side" of the dulcimer and am playing a far more complex instrument with all twelve half-steps of the western musical scale. I like this, because it helps me to think through theory and also understand the diatonic scale better. Plus, I can play songs in any key now, which is important if you want to really spread your wings and fly. She has a sweet voice and is simply beautiful; another crowning achievement for Folkcraft Instruments.

Morning comes way early. More pics and things after a while. Right now, I'm thinking about sleep, in much the same way that Jae has already explored.
Posted by Bing Futch at 12:26 AM