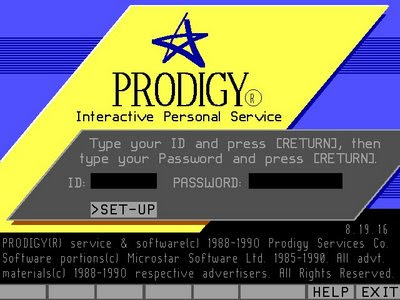 It was on July 22nd, 1994 that I bought an IBM computer with a 128 mb hard drive and a 1200 baud modem, fired it up and installed the included Prodigy Online software, logged on and proclaimed to myself "I'm going to make my money back with this combination." I knew that this would be my preferred method of work from there on into the future.

In fact, I sent an e-mail to Prodigy staffer Jenny Ambrozek and told her that she needed to hire me straight away (part of this was ambition, part of this had to do with the free ID, since Prodigy cost money at the time.) She told me in no uncertain terms, "hold your horses, let's see if you've got anything to offer us yet." Within six months, I was a Special Contributor on the Hobbies Bulletin Board, leading the charge for a sanctioned Disney Fans BB on the service. Within a year, I had become Special Contributor on the newly created Disney Fans BB and, within another year, had become Board Leader. During all of this time, new things were being unveiled to the online community; things like the World Wide Web, Chat Rooms, Web Pages and Interest Groups.

I remember when the WWW was rolled out; headquarters in White Plains, New York was trying to get moderators up to speed on what it was, exactly, and how to design content for it. Those early days of learning HTML were like learning a foreign language and I recall seeing lots of seriously ugly sites, mostly mine. Along the way, there were the first efforts to build community within the Disney Fans virtual world, those first real-time connections in-person, discovering the hard way how to conduct chat room events with special guests and, most importantly, how to connect via dial-up while on the road.

In 1996, Prodigy realized that its proprietary software wasn't a good match for the up and coming internet and they decided to fly their flag on this new "series of tubes." Prodigy Internet was launched with a series of Interest Groups that collected data from various parts of the web and arranged them via topic for PI subscribers. The groups were available only to PI members and, along with AOL, Compuserve, Delphi and some other premium content sites, we were the last of the "private community" sites offering services on the newly commercial internet. As a member of the roll-out time, my Theme Parks Interest Group stirred up news that summer with the Coast-2-Coast Coaster Tour, a madcap dash across the country, riding and reporting on roller coasters (a tour later copied by USA Today.)

Alas, Prodigy's business model wasn't as solid as they had hoped, and one by one, the moderators were told that they could stay if they wished, but on a free subscription basis. Most of us were used to income upwards of $2000 a month and realized that the dream was coming to an end (this was the de facto beginning of the dot com bust.) Not willing to do all of that hard work for free, many of us opted out and eventually settled in with our own virtual ports of call. I've had the Darkstudios.com site since 1996 and it has morphed much over the years; a cached museum of changing designs, attitudes, sensibilities, direction and vision.

Today, as I reflect on 15 years of sitting in front of a monitor, tapping on a keyboard and attempting to navigate our increasingly technological world by way of the information superhighway, I've got to say that for all of the frustrations and hang-ups, tech support and customer service nightmares, constant upgrades and money pumped into equipment - the flip side has been a wondrous experience connecting with people from all around the world, discovering and exploring new concepts, places and ideas, learning and applying knowledge and plying my trade as an artist. That original statement as I fired up that first computer was made by a younger man who still sits down every day, turns on the iMac and says, "today, something wonderful is going to happen."

And part of making it happen is by leaning forward into the adventure and spreading your wings in preparation for departure, isn't it?
Posted by Bing Futch at 1:56 PM

Email ThisBlogThis!Share to TwitterShare to FacebookShare to Pinterest
Labels: internet