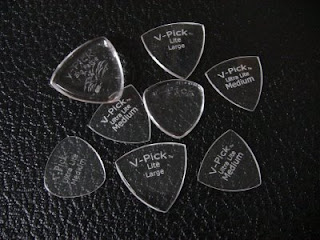 There are so many elements to performing. It's not just your singular ability to play an instrument, rather it's a combination of things ranging from the construction of your instrument itself to the tools that you use in conjunction with it. By "tools", I mean everything from amplifiers and cords, capos and strings, effects, processors, slides and picks.

Performers who are always striving to achieve great heights demand the most out of their equipment, realizing that if you use cheap stuff, you basically get what you pay for. It goes without saying that the best instruments are painstakingly designed to give you the best performance possible. The same goes for everything that you use with your instrument. For years, I've been trying to up the ante in many departments and thankfully landed a deal with Folkcraft Instruments, effectively ending that search for a mountain dulcimer that rises to my exacting standards. I've likewise been seeking a string manufacturer that is making the best possible product for what I do. During NAMM this past weekend, I kept my eyes open but did not make any connections towards this solution.

However, one solution did find me this weekend. I've been going back and forth about picks for a long time. Started out playing with super-thin Dunlop nylon picks and quickly found that, for any amount of control while flat-picking, I needed something much heavier than that. Ken Bloom likes to say that your pick "should be able to lift a Volkswagen."

Lately, I've gotten into a terrible habit: I find a pick that seems to work, then buy a bag of them, then find that I don't like them at all. I've gone through Brain and Tortex and Herdim, all sort of leaving me wanting more. At festivals, people have pressed picks into my hands and I've been amazed that they can get anything done with them, some are slick as stone and just as heavy. Being a sometimes fast player, I wasn't sure how I could be both accurate in flatpicking and effective in rhythmic strumming with just one plectrum. As I said, the solution found me.

While in the booth on Friday, I was approached by Vinni and Nancy Smith of V-Picks, who inquired what kind of picks dulcimer players use. Strumming with a yellow Herdim at the time, I showed it to them and explained that the relatively flexibility and size made it easy for many dulcimer players to make music. That's when Vinni laid an Ultra Lite Medium V-Pick on me.

Made of cast acrylic, it was .80mm in size, a lot harder than I'm used to. Yet, when I began to flatpick, the immediate effect was stunning. My volume jumped 80% and I wasn't holding the pick as tightly as I had done with the Herdims.

Vinni then proceeded to let me try a couple more, including a seemingly mammoth 2.75mm medium rounded pick. "Holy cow, that's huge," I said. Vinni just smiled as I made another run at "Turkey In The Straw." The bevel of the pick had the effect of softening the tone ever so much, but my accuracy had not dimmed one bit - in fact, I felt more secure in the picking than I had before. "Just for kicks, try this one," Vinni said, handing me what looked like a fresh-cut diamond.

The "Big Fattie" was 5.85mm of craziness. "No way!" I cried, steeling myself for the major fail as I went to the "Turkey In The Straw" well one more time and, astonishingly, nailed the melody, this time with a soft, almost finger-picked tone. Un-freaking-believable.

Vinni and Nancy both told me about the nature of the cast acrylic, how the different cuts and bevels create different attacks, tones, sustains and playability. "Because you don't grip the pick as hard," Nanci said, "the muscles in your hand relax, allowing you to play more freely." The acrylic even has a quality that causes it to stick to your fingers as it warms to your touch, meaning no more thrown picks on-stage. "The last thing I want you to be thinking about while you're playing," said Vinni, "is your pick."

Hand me something that immediately creates an improvement in my skill level and I'm one die-hard believer. I used one or another of the V-Picks for the remainder of the show and also during my short set with Jason Link and the Link Family Band at The Stage on Broadway after NAMM closed. It's very rare when these milestones appear within a flash during your career and this was one of those moments. I thanked Vinni and Nanci and their crew profusely for changing my life. I've finally found my pick brand and it's already made a gigantic difference in my playing. When a manufacturer can be somewhat invisible (like these picks) and create something that allows you to tap into parts of your ability like never before, they become the perfect conduit for divine innovation.

Besides that - they're nice people and the music biz can certainly use more of them!
Posted by Bing Futch at 2:09 PM

I wonder if there's a UK distributor/reseller for V-Picks yet - will have to check out their Web site.

Notwithstanding what you said about Dunlop picks (!), I'm extremely partial to Jim Dunlop .73s - I just haven't found any other picks that feel right. That said, V-Picks sound interesting, and I hope I can find a way to get hold of a couple to try.