Boo Takes Me Back...And Into The Future

Today’s guest blogger is an old friend of mine - I have known Bing Futch for going on 20 years now. He wrote articles about my band back in the day (some are HERE and HERE) and we shared stages all over Orlando during the late 90s. 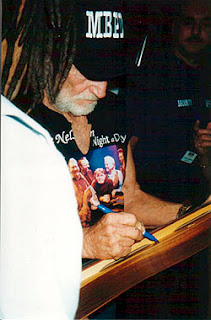 Dave "Boo" Rhea lived the life of a rock-star for quite some time, first with his brother Vaughn's band Von Ra (and later Vonray) and later with Dust For Life. Von Ra was one of the band's I often interviewed on the run-up to their getting a record deal and appearing on "Party of Five." The trip to see Willie Nelson in Clearwater was a wild trip indeed (Willie signed my dulcimer.)
Posted by Bing Futch at 12:59 PM

Email ThisBlogThis!Share to TwitterShare to FacebookShare to Pinterest
Labels: internet