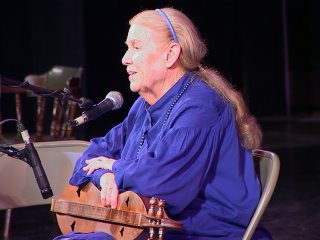 When I first started playing dulcimer in 1985, I had a fleeting idea of who Jean Ritchie was. Since then, of course, the cat's been let out of the bag and I've been looking forward to seeing her in the flesh ever since. She's 83 years old now and doesn't make that many public appearances, which is why I was immensely stoked to hear that Nancy Barker had booked her for Kentucky Music Weekend. Nancy and Jean go back a-ways, so I was hoping for an introduction at some point during the event and that happened on Saturday just after Jean presented a workshop on folk ballads. Her clear, pure voice seems unchanged by time and she sang a capella on that hot afternoon, instantly transporting us back to the simpler days of Kentucky summers. 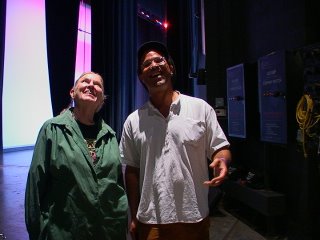 Her husband George is a respected photographer and videographer; Nancy knew that I'd enjoy talking shop with him and she was right. Once she had introduced me to the two of them, George and I had a blast talking about the cameras that we like to use and which editing software worked best for us. After awhile, while on the subject, I asked if he would take a picture of Jean and I and he happily obliged, using my Sony VX-2000. Jean was very accomodating, even as her husband guided us this way and that way into better light. He began snapping some shots, but kept saying that the lighting wasn't quite right. In a candid moment, Jean suggested that we tilt our faces up towards the high roof of the ampitheater's backstage area, which resulted in this very whimsical shot. I like this photo for a number of reasons, one of which is the fact that it's not posed - we were actually in action, gesturing and looking up at the lights. We're not looking at the camera and I like the fact that we're looking up; a gaze towards Heaven. Jean was incredibly sweet and simply glowing with positive energy. When Nancy told her that I played dulcimer, she asked why I wasn't out there with them on-stage during the ballad workshop. How do you reply to that? I didn't. I sort of smiled and blushed. It's not often that you meet a living legend, especially one that is so gracious, down-to-earth and very, very real. I have to tell you, it was superb treat and a blessing meeting Jean Ritchie.

I just got in from the airport and have so much to share about the weekend, suffice it to say that a blast was had by all and there'll be more pictures and stories to share. The highlight of the whole thing, however, was meeting Jean, as I've always hoped. Talk about a dream come true!
Posted by Bing Futch at 10:36 PM

I have been waiting anxiously this weekend for this post. You know it wasn't that long ago that you were happy to meet someone else who played the dulcimer. I prayed that you would meet Stephen Seifert at the last festival and when I saw that Jeam Ritchie was going to be at the next ... well let's just say I was at my prayers again. You discribe the experiance well. Did you know George gave her a dulcimer instead of a ring to seal their engagement? Yes she is a dulcimer legend. But you know what Bing?

You are on your way yourself. I really believe that you have something something to contribute that only a Bing could do. JMHO

P.S. I thought I saw on the bill that Tom and Missy were going to be there ... did you see them too?

Hey John, thanks for your prayers, buddy - it was such a beautiful weekend all around. I feel very blessed to have fallen in with the KMW circle, and that's largely in part to Tom and Missy, who were indeed there (and had a great set of music). We had some time to visit at the week in June, but had even more time over the weekend, particularly at breakfast on Saturday and Sunday. They're great people and really are invaluable to KMW!

You're too kind, John - I appreciate your faith and encouragement beyond the stars. If I have anything to offer the dulcimer world, it's really because the dulcimer world has offered so much to me! The instrument changed my life in 1985 and continues to bless it every single day. I only hope that 40 years from now, I'm still walking onto a stage and playing like Miss Jean. What an inspiration!

You and Yoko, Jae and I need to catch up one of these days. Let me know if there are any clear spots in your schedule.