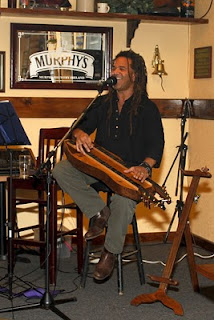 Sucks to have missed NAMM this year. Still, the Anaheim Convention Center could scarcely hold back the pure flood of new inventive gear on the market for today's musician. Again, sort of swinging between two very distinctly different approaches to sound: the pure preservation of natural acoustics versus jack your signal into something other than what it actually is. The twain do meet, which makes for wonderful tonal contrast. The primal versus the chordal capitalist.

The solo show has evolved from the keyboard-and-backing-tracks whimsy of the 90's to something that's more organic, yet still very much wired-in. As an 80's kid, there was this huge embracing of synthetic music, with subsequent rejection as the next decade welcomed shabby, dirty rock as the new mainstream. I've discovered that while audiences unfamiliar with mountain dulcimer take to it very quickly - it's lacking the same kind of full-spectrum sound that a guitar puts out. With fewer strings of a lighter gauge and a smaller sound box, the dulcimer sounds typically quaint when on-stage. My approach was to get something to boost and function as the voice of a bass guitar (Octave pedal), a delay for creating tight acoustic sequences and a loop pedal to orchestrate it into parts. Along with drum loops and live percussion samples, this is a multi-layered approach to creating music. It's like the music exists beside itself in a parallel universe. You lay down eight or sixteen measures of chord changes, then start the loop, adding chops, a melody and maybe a harmony. Then, lay down a bass track and then pick up another instrument and solo while all of that is going on.

It's like tap-dancing. As if it isn't hard enough to play an instrument and sing with focus; then all this gandy-dancing going on.

And each little gee-gaw has its own instruction manual, software and little twirly knobs with levels to be set. By the time you factor that into a P.A. system (with or without monitors) and begin to play your set, you just never know how well you'll hear anything. Sometimes you go an entire set, tweaking things on your end to get it right. If you can't hear well, it's a block between you and the music, not to mention you and the audience.

As part of the next phase of evolution for the solo show, I've been using more chromatic dulcimer as a way of keeping the road paved ahead. The modal structure of diatonic dulcimer is not something I'd gladly give up, but taking the same approach and applying it to a chromatic scale serves up multiple layers of benefits, from giving you a foundation based on chord shapes and scale to training you how to recognize chromatic patterns on the standard dulcimer. More mountain dulcimer players should give it a try - it's really not as hard as you might think. 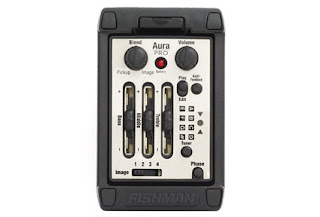 So, Folkcraft has built me a new double with one side diatonic (with a 1+ and 8+) and the other side chromatic. This will be a 29" VSL, which should be interesting, stretch-wise for the fingers, but the tone should be fantastic.

Installed as the pre-amp is the Fishman Aura Pro. The Prefix Pro has been what I've been using and it's been incredible having that control over sound and tone right there on the instrument. Guitars have had it for awhile, why not mountain dulcimers? So many different tones for so many different rooms and surfaces. Shiny floors and glassy windows, wide open tile or tight wooden bunkers, they all change your sound. Being able to adjust the sound of the dulcimer in each different space is invaluable for performers. Not long after, Fishman debuted a pre-amp called the Prefix Pro Blend, which included the under-the-saddle pickup along with an actual microphone inside, which allowed you to blend the signals together.

With an ear towards replicating and amplifying the natural sounds of a gentle wooden instrument so that the original tone is pure and fresh (which makes even better source signal for all the crazywacky effects that you can channel it through - acoustic guitars make for the best distortion - it's true!) the Aura Pro takes that concept a step further. Dulcimers have been hooking up with USB computer ports for some time now, but are increasing in number. The irony is, the closer we get to preserving and projecting natural acoustic audio, the more goo-gads it seems to involve (at least they're getting lighter.) 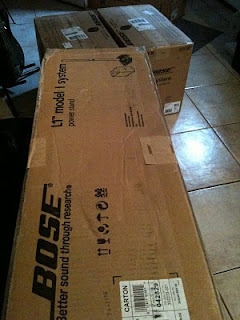 The first time I ever heard a Bose system it was like walking into the path of a bolt of lightning, struck in awe, left standing there thinking that it was the most beautiful thing I'd ever heard. Many years later, a friend and I went to a Bose home theater demonstration and actually left with tears in our eyes. Bose has got a very interesting history. I'm convinced that there is more than meets the eye with them, but in the meantime, they can keep making cool stuff for us gear heads.

By putting the speakers behind you, getting rid of the need for monitors and distributing the sound in a tightly packed configuration of speakers that send sound forward, not up and down, you get a cleaner, purer sound without needing to be loud. It doesn't need to be loud to be heard - it just needs to be clear.

The L1 Personal Amplification System blew my mind when I first heard it demoed and it's been a lusty number of years. After socking away savings and a massive fire sale in December, I chose not to settle for anything less than the Legend. Two bass modules give me support in the bottom end for drums, percussion and bass, one stand. Pedals and microphone, clear space, clear sound. After assembling the parts (the instructions literally are illustrated with pictures), Jae's eyes went wide as I put in a Peter Gabriel song and slowly began to crank it up. At low level - everything can be heard. At medium level - it's putting out a solid amount of sound, yet we're still able to have a conversation standing just feet from the speakers. Getting into more aggressive levels, slowly, the two subwoofers begin pushing more air and the room begins to pump. Extraordinary clarity.

The quest for tone and the communication of sound is something that performers must dance with for all of their careers. If it's not plugged in and demanding adjustment, it's unplugged and needing setting up or redesigning. We're hard wired as humans to push for perfection, however unattainable. The journey that we take while on the quest for anything is part of the training for enjoying those moments when everything becomes clear. With your music, which is close to the bone and next to the heart, you want to present it in the way that you hear it first. And when they come out with the consumer-level tech that allows music signals to be beamed right into the vibrations of your skull, you can count me out on jumping that bandwagon but I'll sure as hell be there for the demo.
Posted by Bing Futch at 11:36 AM