Stompin' In The Garden and Barkin' At The Moon 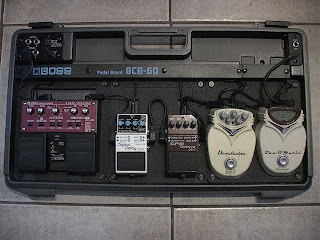 There's always been stomp-box-loving people around me. Stomping. Looping. One-man-banding. I've done a little tap-dancing in my time, but never so much as to necessitate an actual "pedal board."

Well, they make a lot of sense, actually. And I knew exactly what pedals would be right for the job.

The mountain dulcimer is a magical, feathery instrument that has no problem capturing the attention of informal audiences. Its sound spectrum, however, is much narrower than that of comparable instruments that might be up on a stage with a solo performer. When not performing dulcimer in the traditional style, I opt for incorporating the instrument as a controller for this wild array of stuff. At the heart of the operation (for right now, anyway) is the Boss RC-20 Loop Station. I pre-load it with beats and bits, leaving some tracks empty for laying in multiple tracks of dulcimer; leads, rhythms, harmonies, sound effects, whatever comes to mind. Not only can you record your main instrument, you can also plug in a microphone or MP3 player and sample from other sources. Awesome sauce.

After weighing several options, I went with a Boss OC-3 Super Octave. Es chocolate polifónico, you can choose between mono and polyphonic modes and work multiple octaves of deep, fat bass. I kick this in and play on the bass string to lay in foundation on loops or live as a lead. It supports full chords with an earth-shaking pedal tone that, with proper E.Q., can turn your three strings into a seven-string, drop-D monster.

Finally, as a long-time owner of the classic Boss DD-3 Digital Delay pedal, I traded up into a DD-7, which includes a tap tempo feature for matching beats and routing for true stereo effects.

Create a beat on the drum that's being recorded into the loop pedal, now stop recording and switch on the octaver - hit record and play bass string on the dulcimer, switch octaver off and then layer in some normal dulcimer while tempo matching on the delay pedal - activate delay and you've got a shimmering, sparkling echo of your dulcimer playing, locked in to the rhythm track that you've just created. Of course you can see where this would allow for no sleep at the most crazed phases of the moon, it is simply an absorbing experience. It's you as the orchestra.

Anywhoo - there's a couple of Danalectro pedals in the picture up there - a tuner and a Daddy-O distortion pedal. I think I gave the tuner to Stephen Seifert. I don't remember. What I do remember is that I never did like tap-dancing. It has been a learning experience and for the bottom line question: has it accomplished what I was going for? It sure has. And probably in ways that I haven't even run into yet. 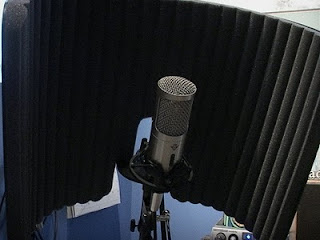 Is There Anybody In There?

We live next to an interstate, a fire station and a gentleman in a giant 4x4 who's fond of music with deep bass and, at the most horribly unexpected times, his real McCoy Amtrak air-horn. Floor space is at a premium, so building isolation booths never even entered the equation. After seriously considering giving up a chunk of the studio floor space in order to create a vocal booth, I ran across the VoxGuard.

In order to get that rich, open sound - we needed to be using condenser mics, which are notoriously good at recording everything in a mile radius. Still, with perhaps some more reflection and sound focusing (and post-production E.Q. tweaking on the occasional Silver Meteor) it could be pulled off. After reading several reviews at TweakHeadz, I settled (and why is that?) for the Studio Projects B-1.

This is all great gear, make no mistake about it, but in most of these upgrades, I'm stopping way short of pie-in-the-sky dreaming in the quest for the most excellent set-up. Money is usually the deciding factor, followed quickly and exuberantly by specs and word-of-mouth or good reviews. If people are generally digging it, you know? I'd love a studio pair of AKG-414 mics. At my bracket, 't'ain't hap'nin'.

Doesn't matter though, there's no jadedness here. The first real tests of the mic with VoxGuard have been extraordinarily good (and with that Tube Pac shaping the sound - it gets back to that "preserving" the audio side of things.)

Next Up: Living In The Future
Posted by Bing Futch at 11:45 PM