Let Me In The Sound 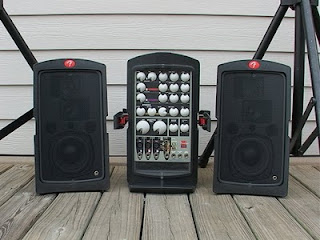 When it comes to music, sounds as a general sort of array, you're either trying to preserve and present the sound with fidelity or you're attempting to change the sound in one or many ways and create something that's hopefully unique as much as it's familiar enough to resonate with the listener. Most folk musicians are in the former camp, keeping gentle company with acoustic music without amplification or amplified in such a way that it retains as much of its natural quality as possible. I'm down with that. When it boils right down to it, nothing beats the sound of an instrument au naturel.

But face it - sometimes, it's helpful to plug in so that you may be heard. Proper amplification takes whatever it is that you are doing and presents it to the listener as you intended it to be heard. Anything less and you might be settling, but there are many fine reasons for that too. 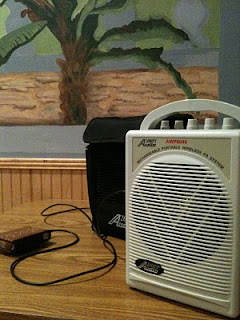 Take, for example, Audio 2000's AWP6040. I got this from Mike Clemmer at Wood 'N' Strings after he told me about how he uses it when teaching workshops.

It's a little 25 watt battery-powered wireless P.A. system that comes with both a lavalier and a lapel mic plus inputs for guitar cable both 1/4" and 3.5" - aux MP3 player jack - you can get one of the mics on you, clip the transmitter to your belt, plug your instrument directly into the box or splitter into the pack, set the tone, individual channel volumes, add a little slapback to the voice and, if you're strolling - you've got 100 feet to wander while you play and sing or speak.

I use this when I teach workshops at festivals and also in the past for ceremonies, house concerts and, tonight, a birthday party. It's truly surprising just how well this unit punches the sound out there. Better still: I don't know what Mike's selling these for now, but last summer, it was a steal at under $100. Right?

This is the *gear* post, so it's going to get tweaky in here real quick. It'll all end with the story of why I'm expecting a delivery in about twelve hours. Here now, the beginning of the past four month's deeper trip to get into the sound. 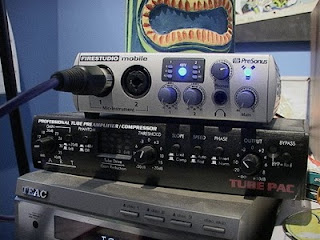 Is It Warm In Here?

If you haven't seen them already (and you can always access these kinds of posts by clicking on the "gear" label in the label cloud on the right) the Tube Pac probably started this whole move to upgrade, so this has been over the course of a year then. Recording mostly with dynamic microphones (Shure SM-57, SM-58Beta) left me wanting to capture more depth and richness in the studio, which led to this single-channel tube pre-amplification and compression unit. Right away, the difference in sound quality was amazing.

Then came the Digitech Vocalist 4, which is really quite funny to sneak into tunes and watch as people try to figure out where your other singers are.

Finally had to break down and get another audio interface. With one fried channel, the PreSonus Firebox was only half useful, not to mention glitchy. After a horrible side-trip into the world of M-Audio, I settled (a-ha, that word again) for a PreSonus Firestudio Mobile because they didn't have the Saffire Pro 40 at the Guitar Center near the house. Let's not chalk this up to impatience - album deadlines dictated that a glitching interface needed replaced, like, right then. And so you do.

There's still the occasional glitch - but nothing that harms recording quality. Just quality of non-frustration levels while waiting for Apple's Audio/MIDI program to connect the dots. No big. Play a round of Words With Friends. Right?

By the way, that P.A. pictured at the top of this post? That was mine - Fender Passport PD150. Nice unit - 4 channels (well, 3 channels and a stereo auxiliary), great for vocals and light duty work, but don't try and put anything that resembles bass through it. Nuh-uh. And unfortunately, that's exactly where I was attempting to go through all of this tone building and developing performance additions. As much as there is a time to strum the mountain dulcimer unaffected and free of cables, there is also much rejoicing to be had when you can really throw it through a heap of processors and turn it into the paintbrushes of your musical dreams.

Next Up: Stompin' In The Garden and Barkin' At The Moon