Studies in C for Diatonic and Chromatic Mountain Dulcimer 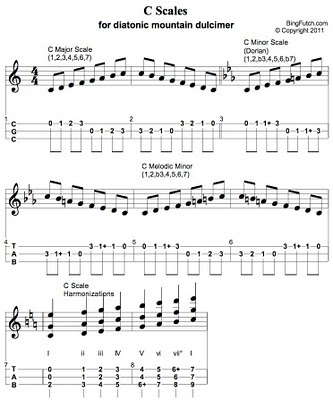 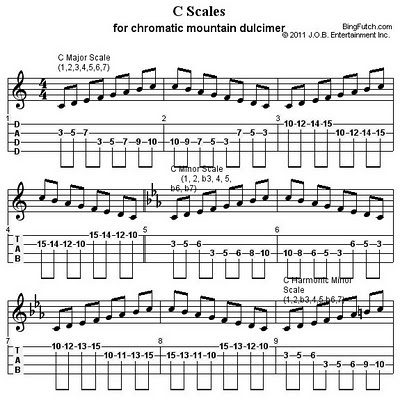 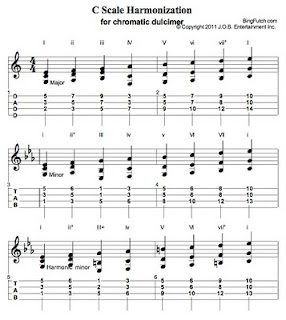 I've decided to take a walkabout with the music and I'm inviting you to come along for a journey into the not-so-scary world of music theory. Some of this will skew easier to chromatic mountain dulcimer, but there's absolutely no harm in learning the bigger picture. You just never know when the urge to purchase that first chromatic instrument may come, so be prepared.

Creating music really is all about knowing how to say what you want to say when you want to say it. That's it. If you can hear it in your head and your heart, you can bring it to life. It requires active, constant engagement on your part, because the music is all there. Most importantly, knowing what your instrument is capable of will give you the opportunity to make full use of its versatility when you're ready to explore.

Like going to the gym, there are lots of exercises that you can do to help fine-tune your sense of music. Beating out rhythms on coffee tables, with and without a metronome to sync up the beat, is a great groove developing tool. Ear-training is something I've mentioned here before and I cannot stress the importance of dialing in the various pitches and how they relate to each other as intervals, chords and melodies. Seeing them written on paper is an important part of the equation, but it's the hearing of these things that will solidify them as part of your developing vocabulary. There are a number of ear-training sites on the web as well as apps for iPhone and Android ( Ricci Adams' newly-refurbished theory site is my favorite spot online while Karajan keeps me studying when I'm mobile. )

Every day, like you're training for the big event, do it just for a little while as part of your rehearsals or even separately. You can quickly run through ten sets of intervals with your smart phone during the day at work at some point. How will this help you? As you continue to work with scales, those combinations of notes that inform so much of what we play in western music, you'll have a better sense of "place" within musical phrases by training your ear to hear the distance between notes. Not only between two notes, but between three, four and beyond even five notes in beautiful extended chords. The more you train, the more you'll be able to incorporate those colors into your playing.

The musical 'alphabet' is a twelve-note scale called chromatic. Out of those twelve notes, a smaller series of seven notes serves as the basis for most Western music. This scale is called diatonic. The traditional mountain dulcimer is diatonic in nature, it's built around the seven steps of a seven-note scale. Each note of the scale has its own personality through chords and other scales that it can influence.

Some notes on the above tablature. I'm experimenting with a different way of formatting for chromatic dulcimer. You'll see a fourth line at the bottom; just ignore it. Think of it as a place to rest your pick. There are only three lines/strings of tablature data - also, for chromatic dulcimer, I'm using the straight numbering system - which is 1 through 12 for the frets. Most of you went with positioning dots at the 3, 5, 7, 9, and double at the 12 as is standard for guitars. Though the tuning is different, by approaching chromatic dulcimer this way will open up a world of discovery for you on other instruments as well. Forget about the + symbol for the time being - it's hard work on the eyes.

Learn your scales, know where every instance of the note lives on the fretboard. Start with the first octave (7th fret for diatonic, 12th for chromatic.) Make sure you're tuned CGC for diatonic and DAD for chromatic. We're gonna hang out in the key of C for a while and see what we can come up with. For now, let's consider this. We're building chords in triads. Each note of the scale has a number. We're in the key of C.

If you build a chord out of every other note in the C scale, you get either major or minor chords depending on the various relationships.

This is just how the math works out. I, IV, V will be major scales/chords and lowercase ii, iii, vi will be minor scales/chords with vii° representing something called a diminished which is either a minor chord with a flattened fifth note or a scale based off of the Locrian mode. Playing through the tablature will show you what each of the possible chords sound like for not only the key of C but for C minor as well. What I'm doing is setting up some muscle-memory exercises for working the scales into patterns. So instead of going to the relative minor scale of C (which would be A minor), we're going to make changes to the major scale in order to play three different types of minor scales; natural minor, harmonic minor and melodic minor.

This is where the ear-training will really pay off. By the time you began playing in C minor (if you have a 1+ fret on diatonic) you have crossed the threshold between diatonic and chromatic. Once over, it's a world full of rich, complex chords that are possible on both diatonic and chromatic. The key here is: learning the scales first, knowing where the notes are located across two octaves of fretboard, then beginning to build chords using those memorized notes. Exploring the number of ways that a chord can be not only shifted and molded within itself, but also how certain movements of chords work more favorably than others.

To review, based on a seven-note scale, a chord is made up of at least three notes - a root, a third and a fifth. Some of those notes can go up or down a half step (sharp or flat #/b ) and create other kinds of chords. Finally, you can add other notes for color.

You can use rootless voicings if working in three string mode - dropping the root is often enough.

During your own chordal explorations, try moving the root, the 3 and the 5 around. Half-steps on the dulcimer are the narrow spaces on the fretboard. Two of those spaces fit within one of the wide spaces on diatonic fretboards. Where ever there is a wide space, there is a fret missing (though some people have put some back in, like the 6+ the 1+, etc.)

The final exercise, scale harmonies - is a great exercise for exploring the variety of color chords available to you on chromatic dulcimer.

Diatonic dulcimers - experiment with second inversion chord shapes to see how that changes the texture and feeling of your chords. Inversions in DAD tuning are easy since it's a symmetrical tuning (234 D-chord becomes 432 D-chord with lower bass tone)

Next up we'll look at chord movement and melody!
Posted by Bing Futch at 12:02 PM