Mucking about in the key of C: More diatonic study 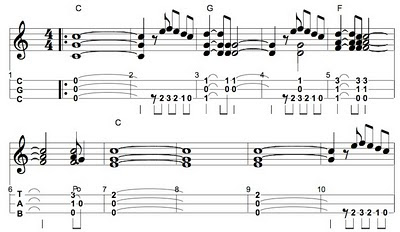 If you're familiar with the concept of music therapy, then you're probably aware of the connection between the various keys and their respective characteristics. Out of all the colors of the rainbow, it is the total absence of color, white, that is most often associated with the key of C. From this page comes the quote "Pure, certain, decisive; expressive of innocence, powerful resolve, manly earnestness and deep religious feeling." No flats. No sharps. Not complicated. It's a basic "home key."

Seven notes. In a scale, we typically play a total of eight notes. The seven notes of the scale beginning with the root or tonic note (in this case, C) and ending with the same note an octave higher (from the Latin octavus - meaning "eight".)

You can build chords from each note by skipping every other letter. Remember that 1, 4 and 5 are Major chords, 2,3 and 6 are minor chords and the seventh is a diminished chord.

and while we're at it

All of these chords are possible on a standard mountain dulcimer. So far, we're sticking with triads; these chords with three notes. Later, we'll get more into so-called "chroma" or extended chords like 6ths, 7ths and suspended chords.

Working out of the possible chord progressions for basic fundamental key of C, I came up with this piece called "C Musing Myself." No strum instructions have been included, so you'll need to fill out and propel this piece once you've mastered playing it through as written.

Now, one thing about playing in CGC tuning is that it requires a light touch if you're using moderately light gauge strings such as .011 - .014 on your melody and middle string. Heavier strings (I sometimes use .016 - .017) will hold up better on most instruments that can tolerate being tuned down a whole step from what they're used to. After talking with several builders, it can be said that some dulcimers are built to sound best when tuned to variables of D (DAA, DAD, DGD, etc.) so you may need to play around with the tuning a bit.

For each movement to a different chord, the bits of melody are taken from that chord and its corresponding scale. Using chords and notes that are not in the scale is standard practice - I just kept it simple for this first composition. It's a tremendously fun exercise. Just choose your key (know the territory), lay out your chord progressions, build a melody and explore the many different personalities of the various keys.

At least a couple of music theory websites made note (pun intended) of a dual-personality for the key of C, which also swung towards the "war like" side. Perhaps that's best reflected in the relative minor key of C which can be found by going to the sixth note of the Major scale, whatever it might be. In this case, the note is A - so the key is A minor. Same notes as the C scale - just started in a different spot:

(a good mental mind-map = six up or two back from the root is the relative minor. C minus two = A)

A look at the minor side of the C coming up next!
Posted by Bing Futch at 12:20 PM