Gear In Action, Not Inactive Gear

So it's been a whirlwind since my last post, heading down to Key West and putting on our second annual Key West Dulcimer Fest: an easy-going gig if there ever was one. I took the Bose L1 Model 1 down there as our P.A. system for the instructor concerts and also ended up using it to amplify Butch Ross during his stint at the Key West Food and Wine Festival wine stroll on the first Thursday night. Armed with extra cables, I got intimate with the system fairly quickly and in the moment as I began to understand what it was capable of doing. 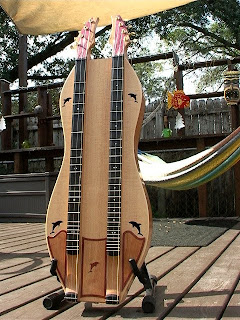 I also took delivery on my latest mountain dulcimer from Folkcraft Instruments, this one with the Fishman Aura Pro pre-amp built into it. Truthfully, I've not had much time to mess around with the Aura (it involves some downloads - and I've been without wi-fi for a while now) but the dulcimer is absolutely gorgeous and has a magnificent sound; great tone and volume. Last night, I performed my first solo show with the L1 and honestly don't know why I waited this long to get the system. It is like night and day - being able to hear yourself clearly, project out into a room (in this case, McWell's back bar) and, with only one of the B1 bass modules, still had enough bass to support the drum loops and bass pedal tones. I decided to go with one bass module as a test and will probably use both next time for added push.

The next few weeks will be spent experimenting in the lab with the new gear, seeing just how far I can push the system and changing my flow of operation. There are some things that I'd like to see improved and other things that have that taste of "yes, finally!" Of course, as things progress, I'll report here, just in case you're on a similar gear discovery of your own.
Posted by Bing Futch at 10:01 AM