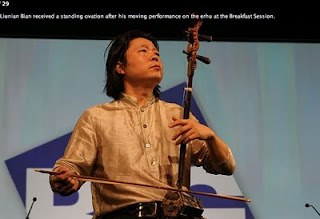 Attendees were treated to a moving performance on the erhu by Mr. Liunian Bian, who wrote the music for the Beijing Olympics closing ceremony.

We arrived in Anaheim on Wednesday night, checked into the Holiday Inn just around the corner from Disneyland and met up with Richard and Nick from Folkcraft, who brought my new axe along with them to the room. After drooling all over the fretboard, we headed out for dinner at Mama Cozza's (home of the world's largest fried cheese sticks) and then returned to the lobby of the HI where I got Annie and jammed for a while. 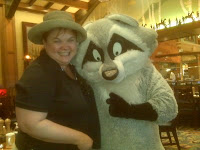 The next day, Jae and I met with her co-worker Michelle at the Grand Californian Hotel at the Disneyland Resort and enjoyed a nice character breakfast at the Storyteller's Cafe, where we enjoyed great grub and visits from Chip 'n Dale, Meeko, Koda and a swell bloody mary, among other beverages. Jae was well keyed-up for her visit and the character meet and greet was a theme for the day that sent her spinning back into early childhood; it was fun to see the park through her excited eyes. 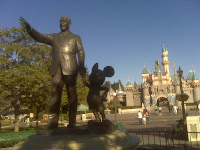 We were there before park opening (thanks to Michelle and a special offer for guests of the resort) and closed the park down almost twelve hours later, with a side-journey into Disney's California Adventure, built on what used to be Disneyland parking lot. It pales in comparison to the original Disney experience, but we had some fun there, including free tortillas and the brightest green beer cups you ever saw. 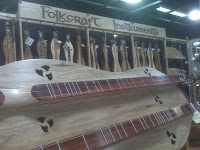 Friday and Saturday, Jae was on her own as I went into NAMM and demonstrated mountain dulcimer at the Folkcraft booth. Each day, I played for about six hours, but it didn't seem that long at all, in fact, time went rushing by as folks stopped by. Friday morning, I attended the free NAMM breakfast and witnessed a performance by Liunian Bian on the erhu, which had been outfitted with a pickup from Roland Corp. As you can see and hear from the video, this was a stunning display of virtuosity and it whetted my appetite for more. However, besides catching a few snippets of demos here and there, I pretty much remained in the booth the entire time, save a couple of breaks to stroll with Jae, and didn't see much of the show - which was alright, because a good portion of the show seemed to come by our booth and see me. I made some decent connections, met some old and new friends, sold some CDs and got to play Annie a whole bunch. No complaints here.

Our plane was scheduled to leave on Sunday morning (Jae didn't realize that there was so much more NAMM going on - but it's just as well, might've spent a bunch of money that we didn't have) so we had a wonderful last night's dinner at El Torito (Mexican food rocks!) and hung out, playing music, in the HI lobby for awhile (the staff had asked me every night to come and play again) before bidding everyone a fond adieu.

Already, I'm looking forward to Summer NAMM in Nashville - and this time, we'll be hanging out for all of the days! Check out the many photos and videos on the NAMM website to see just how awesome this show was!
Posted by Bing Futch at 10:19 PM