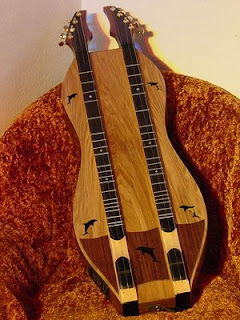 Annie has arrived and she's already seen many music miles (is that how you gauge something like playing non-stop? Mileage?)

She's a sweet and wonderful instrument, making her debut this week on the Dulcimerica podcast and on-stage at O'Doherty's Irish Pub. I'll post some sound samples in a little while.

At NAMM, she was a big hit with folks who stopped and stared, walked over and listened for a while. I was playing through a L.R. Baggs acoustic amplifier that was pretty wicked and brought me one step closer to deciding on a decent sound rig. If only they made a battery-powered cabinet. I was told about something called the Dawn system that also sounds mighty interesting. With two inputs, it's $400 less than the Bose L2 that I've been lusting after for awhile (Folkcraft will get me a unit at dealer cost, which helps.)

Of course, money would help greatly in aiding the decision-making process.
Posted by Bing Futch at 6:48 PM