Studies in G for Diatonic and Chromatic Mountain Dulcimer

For a reference starting point to this series, please visit the link for Studies in C for Diatonic and Chromatic Mountain Dulcimer. 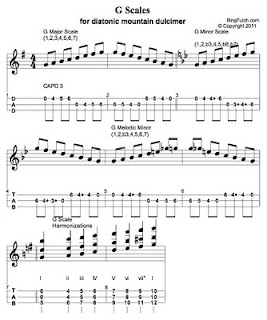 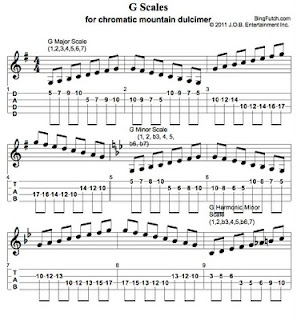 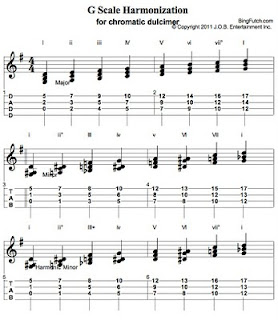 The next stop on our journey through the 15 Major keys (and their relative minors) takes us to the key of G, which is an easy one for diatonic mountain dulcimer players. For this exploration, you'll need to be in DAD (dd-A-D) tuning with a capo at the third fret. Chromatic mountain dulcimer players will not need to use a capo, of course. If you don't have a capo - get yourself one quickly! It's an invaluable tool for switching keys without retuning.

Where the key of C had no flats (b) or sharps (#) - the key of G has one sharp, which is F#. Remember, flats and sharps effectively mean to lower (flatten) or raise (sharpen) notes a half step. Following the seven-note pattern, the G Major scale looks like this with its corresponding scale degrees:

Off of each note in this scale, you can build either a chord or another scale. If we simply start anywhere on the scale and add every other note, we'll build a series of triads:

As we move through these 15 keys, we'll be adding sharps and, eventually, flats to the scale. According to Sir James Jeans, "Every additional sharp in the key signature is supposed to add to the brightness and sparkle of the music, while every flat contributes softness, pensiveness, and even melancholy."

The key of G is certainly a preferred key for many session musicians from Celtic and Old Time music traditions.

To review, out of each Major scale comes a relative minor scale that shares the exact same notes and chords, but in a different order. By starting on the sixth note of the Major scale and playing through all seven notes, ending an octave above where you began, you will then be playing the natural minor scale, which in the case of G Major ends up being E minor:

You'll notice in the Major and minor diatonic and chromatic studies, I have not touched upon the relative (or natural) minor. Rather, I've dealt with Major and minor scales coming out of the same root. (C Major - C minor - G Major - G minor, etc.) This is to help you with playing Major and minor examples in the same areas of the fretboard. Nevertheless, the construction of both types of scales is the same:

Use the tablature above for fingering exercises, working out of the "boxes" to get familiar with the patterns. The scale harmonizations exercise take the various scales and stacks chords at equal distances apart, much like we've built triads out of the root notes of each scale note. Skip every other letter in the scale and, for each note, you'll have built a triad. Notice how certain "spellings" result in Major chords (bright and happy sounding), minor chords (somber and pensive) or diminished chords (quizzical, odd). For chromatic players, I've also included harmonizations for the harmonic minor, melodic minor and four-tone (seventh) scales.

Diatonic players take note: without a Bb or F, you'll need to bend in order to play the G minor scale listed in the tablature. Bends are a good habit to get into, so I'll be including all of the proper minor scales for each key that we explore.

Next post: we'll look more at the relative minor of G Major.
Posted by Bing Futch at 12:29 PM

Hi Bing,
The pdf links in this post (and some of the other "key and scale" posts) are no longer there. Would you be able to reestablish the links? Your posts in this series are extremely useful and a great service to the dulcimer community. Several of my dulcimer friends use them also.
Many thanks,
Jose
Austerlitz, NY

Thanks for the kind words, Jose. Looks like some links broke in the server/site upgrade. I think I caught them all, but please let me know if you find any more. Thanks for the head's up and glad you're getting some use out of the material!