Studies in D for Diatonic and Chromatic Mountain Dulcimer

For a reference starting point to this series, please visit the link for Studies in C for Diatonic and Chromatic Mountain Dulcimer. 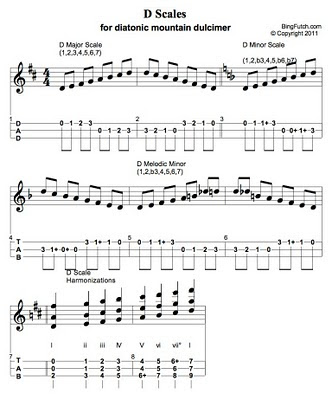 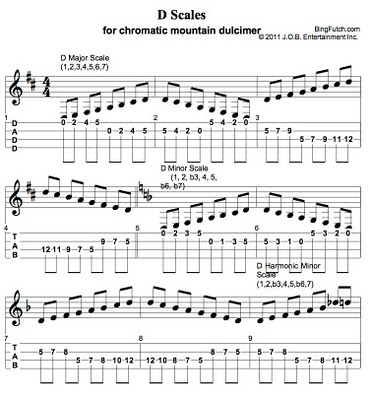 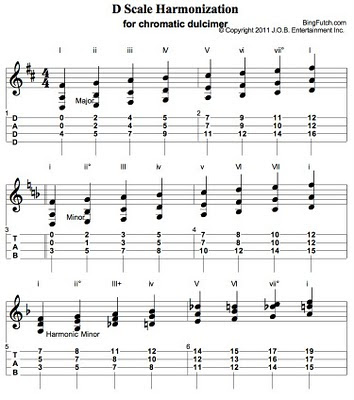 As we continue along on our journey through the 15 Major keys (and their relative minors), we reach the key of D - D for dulcimer. Since most mountain dulcimer players begin playing the instrument with a tuning of DAD (dd-A-D) this should be fairly familiar to many. Once again, chromatic players need not retune for any of these explorations.

Where the key of C had no flats (b) or sharps (#) and the key of G has one sharp, which is F# - we now add to that one sharp for the key of D. In addition to F#, we've also now got C#. Remember, flats and sharps effectively mean to lower (flatten) or raise (sharpen) notes a half step. Following the seven-note pattern, the D Major scale looks like this with its corresponding scale degrees:


A note by itself is simply that: a note.

Three notes officially becomes a chord or triad. You can also have more than three notes in a chord, but more on that later.

Begin building chords out of each note in the D Major scale by first choosing the root note and then skipping every other letter in the scale like this:

Remember that even though we are dealing with seven-note scales, there are notes in between some of these steps that can be found by raising or lowering the notes a half-step.

According to Christian Schubart's "Ideen zu einer Aesthetik der Tonkunst", published in 1806, D Major is the key "triumph, of Hallejuahs, of war-cries, of victory-rejoicing. Thus, the inviting symphonies, the marches, holiday songs and heaven-rejoicing choruses are set in this key."

The key of D is certainly a preferred key for mountain dulcimer players, Old-Time performers and Celtic session musicans.

For every Major scale there is a relative minor or natural minor scale that shares the same notes, albeit in a different order. To find it within the Major key, simply begin on the sixth note of the scale and play the seven notes in sequence:

I know I'm repeating things quite a bit, but that's one of the fundamental rules of learning - repeat, rinse, repeat (okay, maybe not the rinse part) until it's locked into your memory.

Speaking of repeating, you'll notice in the Major and minor diatonic and chromatic studies that are available for download on each of our key studies blog posts, I have not touched upon the relative (or natural) minor for each of the Major keys. Rather, I've dealt with Major and minor scales coming out of the same root. (C Major - C minor - G Major - G minor, etc.) This is to help you with playing Major and minor examples in the same areas of the fretboard. Nevertheless, the construction of both types of scales is the same:

I figure now's as good a time as any to begin covering some of the extra materials in the .pdf files you're hopefully downloading. Along with Major and minor scales (and there are a few different types of minor scales, which we'll get into with the next post) for diatonic and chromatic fretboards, I've also included scale harmonizations. Scale harmonization can be described as using each note of a scale as a root note for a chord and then adding other notes within that scale to form a chord.

By the way - notice how the term "notes" is an anagram for "tones"? Cool, huh? They are one and the same.

Also, notice how I've been capitalizing the term "Major" and spelling "minor" with a lower-case letter. This has been by design, leading up to a better understanding of reading scale degrees.

Let's take our D Major and minor scales with their Arabic numerals (1-7):

Now, remember, when we build chords off of each of these notes, skipping every other letter, the result is a mixture of 3 Major, 3 minor and 1 diminished chord. That's just the way the math works out.

If we use all uppercase Roman numbers, then we just add a lowercase "m" to those scale degrees that are minor. We then add a degree symbol "°" (like what is used to denote temperature in Celsius or Fahrenheit) to the degrees that are diminished. Nothing is changed with the Major degrees. So we get this for the Major and minor scales:

Notice how in either scale, the characteristics of each scale degree don't change between Major and minor scales. D remains Major, B remains minor, C# remains diminished, and so on. The order changes, but that's it.

Though this method is perfectly acceptable, there is also another way of going about this, and it's considered easier to read by many. You simply make the minor and diminished scale degrees lower-case. But be sure to keep the degree symbol on the diminished:


WHY is this important? Well, by using the scale degrees, we can talk about the progression of chords without having to specify the key.

For example, one of the most popular chord progressions of all time is:

What does that mean? Well, at first glance, we can see that they are all Major chords. So, let's assign a key: D.

If we're using a D Major scale, that means that:


The chords built off of the first, fourth and fifth scale degrees. Try playing it on your mountain dulcimer (or whatever instrument you've got with you.) Sound familiar?


Our first clue that something is different is that our root chord is minor (lowercase.) So we're dealing with something in a minor key, even though it has Major chords as well. If we are in the key of Bm (B minor) then:

Of course, you can also write it out as Bm - A - G, but our focus now is on identifying Major, minor and diminished chords by looking at the scale degrees.

Next up: we'll get into the relative minor key from D Major and also dip into a look at chroma or extended chords.
Posted by Bing Futch at 11:19 AM