A GEm of a Key 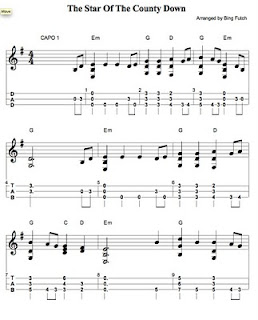 Howdy and welcome back!

The focus now has been on the key of "G." It has one sharp, which is F#. As mentioned in the previous post, we're now going to look at the minor side of this key.

In this case, the sixth note is "E", so if we begin with "E" and run through seven notes - we get an E minor scale. This one's easy to remember because the Major scale is G and the minor is Em. That spells "GEm." Not all Majors and their relative minors spell something cool, but you may want to play some word games like that to memorize a handful of them (with C Major and its relative minor of A, I sometimes think of a cam-shaft or "CAm.") You can always simply count six notes from the root, which is G. Or, you can go backwards two notes from the root, which puts you at six as well. There are a lot of little tricks that will help you to recall this stuff.

Quick recap: The order of notes has changed, yet it is still the same seven notes of the G Major scale. When played in this new order, beginning with E, the steps between notes become altered slightly, which gives minor chords and scales a darker, more somber tone. Now remember - the point at which we begin on the scale has changed, so the notes have not. Which means that each of those notes retains its Major/minor/diminished quality. You'll just encounter them in a different order like so:

But, if you begin this scale on the sixth note and use all of the same notes as the Major scale, you get the relative minor scale (also known as the natural minor or Aeolian mode.) So now, chords and scales built off of the 1st, 4th and 5th notes are minor, the 3rd, 6th and 7th now present Major scales and chords while the 2nd is the location for the diminished chords and scales.

To explore the key of Em in diatonic dulcimer land, here is an arrangement of "The Star Of The County Down." Tuning is dd-A-D (DAD) with a capo at the 1st fret. By using the capo, we are first putting the dulcimer into a tuning of ee-B-E (EBE) and then we are also using the E minor scale which begins at the first fret and continues through the 8th fret without using the 6 1/2. Below is the sheet music, the Tab|Edit file and a mp3 of the tune played one time through.

Star of the County Down.pdf

Star of the County Down.tef


The Star Of The County Down.mp3


So G Major has one sharp - F#. That means that E minor also has one sharp - F#. Remember that to go through your scales, you simply repeat the first seven letters of the alphabet, A through G. No matter where you start, whether it's on C or G or A or E, you'll always get to G and then start over again with A. There is no H, I, J, etc. Then, it's just a matter of knowing which flats and sharps are in each key. Once you know that, you simply add the appropriate symbol to one of those seven letters. Right now, we're going through the sharps and after that, we'll be exploring the flats. Not all of these are going to be suitable for diatonic mountain dulcimer, but it doesn't hurt to know all of the keys. This knowledge will assist you in playing other instruments as well. In fact; the more you know about music theory, the more inclined you are towards understanding how to play music in more ways! For chromatic mountain dulcimers, of course, this study will truly help you understand your instrument better.

Next up: probably the most popular key for mountain dulcimer players - that's D. D for dulcimer!
Posted by Bing Futch at 7:20 PM