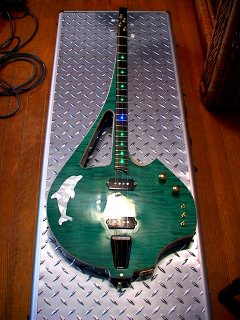 Despite the first named tropical storm of the season swirling around outside, I went to work for a half-day and came back in time to meet the UPS truck. With rain spattering down upon the big brown box, I came back into the house and opened it up.

First off, Doug was going to include a soft case with my purchase, but Jae sneakily contacted him and asked for an upgrade as an anniversary present and let me tell you, it's a mighty impressive case. I opened it up, caught a beautiful whiff of "new case smell" and let it wash over me, looking down at my new axe.

What can I say except, "he's beautiful." Going back and forth throughout the day about what to name him, and at one point actually figuring that he would be a she after all, and with the storm sending the rain sideways, was going to call her "Wendy" (you know, "who's walking down the streets of the city", etc.) - but once I plugged this bad boy in and started cranking through some riffs, it was clear that it was indeed a boy, and the name that had been circulating through my head and heart was "Alberto." They arrived on the same day, didn't they?

Doug did a fantastic job - enclosing a note which gave me some technical pointers and suggestions for future routing and electronics work. Man, what a sound! With one pickup, it's pretty solid, but with two pickups kicked on, he fairly screams "ROCK ME BABY, ROCK ME ALLLL NIGHT LOOONG!" A tone that's crisp and clear, fat and frantic - especially running through the GNX2 module, which was finally up and running thanks to the delivery of an adapter yesterday. I tried tuning it to DDad (the bass strings are doubled instead of the melody and they are in reverse order) and went for the test - could I play standard dulcimer tunes in standard fashion? It wasn't coming easy, so I flipped him over and played it like a guitar. Thruummmmmmm. Much fun noodling that way for awhile.

Then I tried tuning it the way Doug had suggested: EEbe, which he said made it easier to jam along with guitarists. Just this whole step bump brought new life into the chords and, placing him on my lap, played Alberto in standard style and, what do you know, I found myself jamming "Cotton-Eyed Joe" after running through the diatonic scale a few times to orientate myself with the chromatic set-up. It'll take some getting used to. After doing that for awhile, I took a tour through the sound module patches and just went for it. Ahhhh, what a blast! I cranked through a rockin' version of Scooter Jennings' "Electric Rodeo" and decided "oh yeah - me and this boy is gonna have some fun here."

So, I'm tickled silly and, mindful that I've got a lot of cleaning around the house to do in anticipation of our new sofa that's being delivered on Thursday, I took a few pictures and promised Alberto that I'd haul him back out tonight after stopping by Guitar Center and picking up a proper strap. Below are a few photos of the new arrival and hopefully soon, I'll post the first little ditty that springs from the wood and steel. 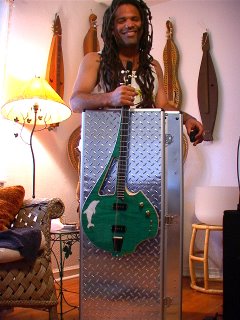 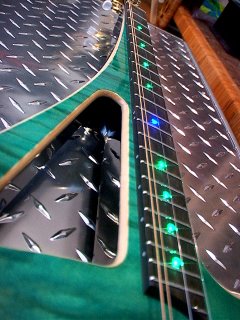 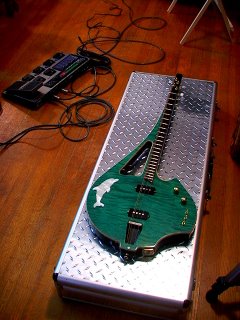 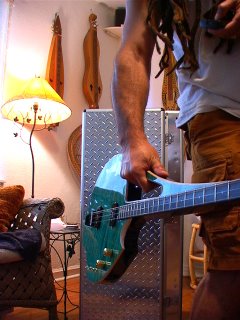 Dear Bing,
I'm so glad it arrived safely midst the storm. I find it uncanny you chose to name it Alberto as this was exactly what I was thinking! I think you will find after spending a little time together,that it will become quite natural to figure out and play. I cant wait to hear what you come up with.Looking at the pics of you and Alberto, I can see it is in fact "so Bing"! Let me know If you have any questions.
Enjoy!
Doug MacCormack

Aloha Doug - I must've been e-mailing you as you were posting this! There just wasn't enough time in the evening tonight, I'll tell ya. But tomorrow is another day. Thanks again man, I'm a happy guy!

The first picture say it all ... "Here's one happy camper." (I also like the dulcimers in the background ... to show Yoko I'm not the only one with DAD.) Doug was so right on .... this is "so Bing!" Killer case too.

Hah, DAD is putting it mildly. I had to promise Jae that we would get a new sofa before I acquired any more dulcimers - which is sort of a win/win situation, seeing as how even my butt was getting tired of sitting on wicker. LOL!