To quote Walt Disney, "I'm so happy I could just bust." The Dulcitar has been completed and is currently en route from New Hampshire, scheduled to arrive Tuesday, according to the UPS website. When Doug sent the final pictures and I got that first look at the completed instrument, an electric shock ran through my body and I had to stifle a yelp of euphoric glee (euphorically?) Due to arrive on Monday is a power cord for my Digitech GNX2 effects board that I bought a few years back, played with for a couple of days and then promptly shelved when I bought the Line 6 Spyder amp. I never truly investigated the possibilities with the GNX2 and methinks that I wasn't quite ready for it back then anyway. Now that I've realized that tube amp is the only way to go in my search for tone, it seems the discontinued GNX2 is going to become my new best friend for awhile. (I have a talent for buying gear that quickly becomes obsolete.)

Below are the final pics that Doug took, which includes the placing of the frets on the neck. In the last picture, he stands with the completed treat, which he admitted was such a beauty that he was loathe to let it go.

Man, it's gonna be a long way til Tuesday. 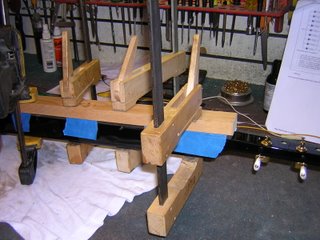 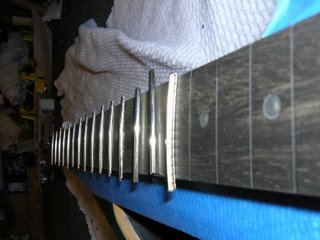 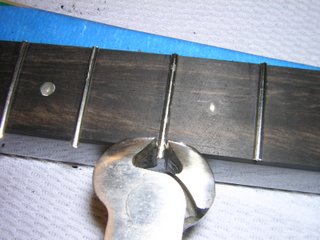 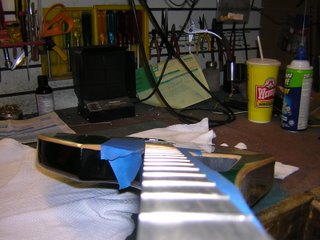 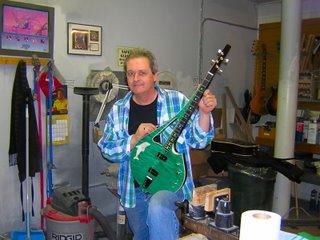 Bing,
It looks great can't wait to see you with it. Do you think you will have any problems reversing chords? Make sure you get a sound byte up soon.

You know, I'm not sure how I'm going to approach the chord situation. I may go with a 1-3-5 tuning for a lot of things. Doug is using an E-B-E tuning, I think, which is like a compact version of the E-A-D-G-B-E tuning for guitar. That'll give me power chords for sure - but I've been fooling around with over-the-top playing and can manage some fingerings in D-A-D. It's going to be some kind of experimental phase, for sure!