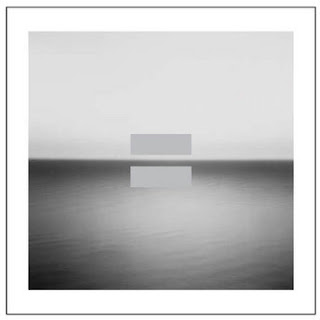 It's pure coincidence that I've begun recording my next record on the same day that U2 releases its long-awaited "No Line On The Horizon." The plan all along, after the release of "Christmas Each Day" in late 2008, was to write, record and publish two new instructional book/CD combos to take on the road for spring 2009 festival season. "Mountain Dulcimer In The Band" books 1 and 2, along with 4 accompanying CDs, are now available and I feel like that work is done for now. It's been about two years since "Dulcimer Rock", an album that was composed of songs both old and new; relatively safe for the ears of dulcimer festival audiences and edgy enough to have found fans in all other areas of music fandom.

"Kokopelli Rising" was an intensely personal album, albeit one to showcase the Native American flute and mountain dulcimer, so there were parameters in place from the start. With a boiling need to purge some of life's residue and internal conflict somewhat relieved, the path towards making this new record was paved lightly with musical markers tied around trees.

And I've listened to the new U2 album twice through now; there are a couple of standout tunes that caught my ear and my breath like the shiny "Magnificent" and the confessional "Moment Of Surrender." Emotionally, there were peaks that I wanted to match in this new endeavor - a lot has happened since the last time a musical vein was opened in this studio, and that went mostly unheard for production quality reasons (the album was 1998's "Die Caught Ah Me!", which I've rifled, plundered and looted for material ever since.)

There's one song recorded prior to this day that might end up on the album (the world-beat romp "Mia Cafe", written for an Australia art exhibition), but everything else is being composed on the spot in the studio, attempting to capture the emotions and energy of the Now. The aim is to get below the surface of spirit and pare away some of the shadows; a scary thing to do - introspect in retrospect. For many years, I avoided listening to other people's music as I concentrated on developing my own unique style. Once that seemed secure, the soaking up of the many wondrous influences around the world has opened up a universe of tastes and styles, colors and textures. Not only that, but ideas about storytelling and song presentation - framing of ideas and feelings; bringing truth to the surface where it can once again itch and burn.

Likening the entire record to a plunge into dark waters, it's tentatively being titled "Dive."

The title track has been written and I'm now in the process of fleshing it out - what I'll be doing through this blog is shedding some light on the creative process and what it takes to bring an album from idea to reality.

Say It With Style

What came first, the chicken or the egg? The lady or the tiger? The music or the lyrics? In the case of "Dive", I wanted a balls-to-the-wall, three-chord rock assault to couch the lyrics that would introduce the theme for the album. Swore to God I wouldn't write this thing in sequence, but we'll see how that goes.

I ended up grabbing the Greibhaus solidbody and injecting it into a well-distorted amp, eventually crunching out a looping, insistent phrase that modulated between E5 - G5 and A5. I knew I wanted to make that the foundation for both the verse and chorus to keep the thing rockin', so breaks would have to be taken from that for dynamic's sake. 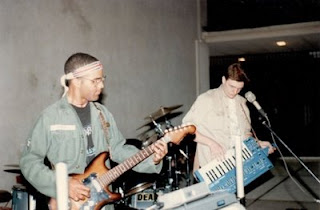 Though the punkiness of the music hearkens back to my Crazed Bunnyz days (that's me on guitar with Marc Plainguet on bass synth circa 1986), the album will bear lots of cross-genre touches, including classical orchestrations that come from my work as a film composer - so though some of the changes would seem standard, the idea here was to also throw in some cinematic elements that could either be recalled later or arranged for maximum effect. The pre-chorus bridge carries this weight, with a modulation between B5 and C5 with a flat 6th chiming back and forth, which really gives it a sort of sinister and dangerous feel. Maintaining tension - I break up the main riff (shared by the bass) with a wide open G chord that never resolves to the A. That comes later.

That's the nuts and bolts of it - it times in around the 3 minute mark and when I've got a demo ready, it'll be posted here. But for now, here are the lyrics to "Dive":

the weather here is always amazing
no-one rains on your parade
center of the earth
another virgin birth
Jesus Christ, you really got it made

when the sky turned black and the water chilled
and the hired guns arrive
looking for the killer of the man you killed
hold your breath, it's time to dive

it's murky in the deep blue under
forgotten memories, buried in the sand
wish I had a map
to relocate the crap
that I tossed down here from on the land

when the sky turned black and the water chilled
and the hired guns arrive
looking for the killer of the man you killed
hold your breath, it's time to dive

As you can tell simply from the lyrics - it's much darker than anything on "Dulcimer Rock" and certainly edgier. Much of the later Mohave material floated in this realm, tunes like "Planet Earth" and "All For One" with the difference being they were tunes generally sung in the third person; a safe place to be as a commentator or Greek chorus. When a tune comes out of a confessional place, the risk is huge.

I can't honestly tell you which direction this album is going, other than to say it's going to be "without limits." Though there is a lot of darkness to parse through, there is also much light and I do expect that there will be balance. But you know what they say (and *they* are usually right, I've found):

it's always darkest before the dawn.
Posted by Bing Futch at 11:33 AM