The Art of Moving Sound 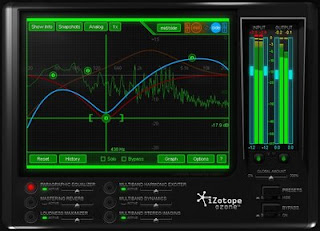 Despite one of the band vehicles getting a flat tire on the way up to Eustis last Friday, it was a great night. It'd been a while since we played with Gil Oliver on drums and he's been performing this material almost as long as I have, so he was very much "in the pocket" and gave us a solid foundation upon which to dance (though not too hard, because the stage wobbled like a bowl of jello shots.) Mohave has been really grooving in the jam arena and we had a couple that were pretty wild, including one that connected "Big Alligator" with a massive space-jam with Native American flute, djembe and solos from everybody. Afterwards, people began asking where they could get that on CD. Very interesting.

When I got back home, I checked out some mastering techniques on "Dive!" by one of the MacJams.com members, Andrew Mackle. Over the past couple of years, I've studied the art of E.Q.; equalization of tracks that you've recorded. From there, I've basically slapped it onto a disc and have had pretty good results. Andrew pointed out to me that I was missing a key element in the process, which is the mastering of those very same tracks. He explained it like this:

"Mastering is a necessary step in the production process, and a lot of things that you are trying to fix during mixing should be left for the mastering."

This was literally music to my ears. It took a while to understand the science of mixing and it's still alien landscape, but I've got a pretty decent map (The E.Q. Bible.) However, knowing that there was an entire other step in mastering, I shuddered to think about what that all entailed, other than the obligatory matching of volume across an entire CD release. No sir, there's much more than that!

"When mastering on a stereo 2-track recording the only way to get separation is through time delay between the left and right speakers. This has to be applied to specific frequency bands so all the freqs don't get stereo separated, just the ones that you want. You use a multi-band stereo widener for that. That is what is giving it a "bigger" stereo effect.

I also used mastering reverb over the entire mix to place everything into the same sonic "room", instead of a bunch of tracks playing at once.

I used compression (again multi-band) to focus in on the drums and bottom end (bass) to bring it up in relation to everything else.

I used Harmonic Excitation (again multi-band) to give the entire song more sparkle. This works by dividing the song into four distinct frequency ranges and adding varying degrees of even harmonics up the audio band in different amounts depending on what is contained in each band.

Finally, I used a multi-band dynamic effect, which works close to a multi-band compressor to focus in and get the levels right, including the added harmonics.

These are all commonly available effects, and most are available and sold as 'mastering effects' by companies like Izotope (Ozone 4)."

I thanked him profusely for explaining in simple terms what it was that my efforts were missing and downloaded a trial version of Ozone 4 this morning; ten days to experiment. That should be enough time to re-visit "Dive!" as well as play around with the next track that comes out of this journey, something I'll start today and will post about shortly. Though I'd like to go ahead and purchase Ozone 4, I've already layed down money on another very important utility for moving sound this week, one that I had been sorely lacking for quite some time: a P.A. system.

Sound moves naturally through the air when you're playing an acoustic instrument like a mountain dulcimer - but that's only for those in the immediate vicinity when the music is sent without processing. That's why when you start plugging the instrument in to record it, specific tools are necessary to get the right sound, as contrary as that seems. Likewise, when playing your instrument for 50 to 100 people at a time, amplification of the sound is required - but improper signal processing can make your nice, authentic, acoustic tone turn into an electronic garble that no-one wants to listen to. Anyone who has played through a bad P.A. or listened to an artist through one can attest to this. You just want to run and cover your ears.

I've been fortunate enough to know people who own quality P.A. systems, but it finally became obvious that my own little system was needed for the upcoming spring and summer tour. P.A.s for small use are quite affordable, and I was fixated on getting something that the whole band could use. Heavy lifting comes with a heavy price (and the gear is usually, well, heavy.) 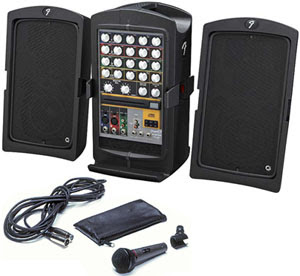 So, off to eBay I went and after talking with Full Sail instructor and friend Jerry Waller, came to the conclusion that the Fender PD-150 would be the right system for the job. It's light (44 pounds), has 150 watts of power and a four-input mixer that includes a CD player, so you can pipe in music in between sets. On-board effects like reverb and delay are independent of each channel and there are two other nifty technologies that will certainly come in handy. One is the VIP (Vocal Input Priority) system which automatically lowers the background music when you speak into the mic. The other is feedback rejection circuitry, so that the speakers can be placed behind you (usually a no-no, as the microphone is pointing at the speakers, which can cause ear-drum shattering feedback) without any squealing or the need for monitors. This is key to hearing what the audience is hearing and allowing you to adjust the sound accordingly.

Suffice it to say that I'm pretty stoked and really looking forward to how this will "plus" the quality of my solo shows. I just booked the first of a series of house concerts for the spring/summer tour (in beautiful South Carolina) and will be posting details soon. In the meantime, recording continues on "Dive!" and a new world of exploration accordingly opens up.
Posted by Bing Futch at 9:47 AM