A Ripple In The Pond 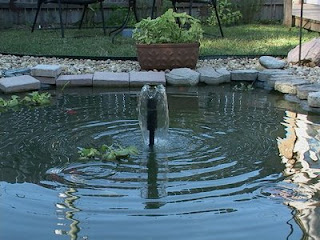 It's a beautiful day; the kind of weather that we look forward to here in Florida. Blue skies, cool winds, open your windows and turn off the A/C; fall is finally settling in with a soft "hello."

Jae and I both slept in after yesterday's marathon of the 2nd Annual Central Florida Blues Challenge. Nine bands competed for the grand prize, entry into the 25th Annual International Blues Challenge in Memphis, Tennessee next February. I emceed the event, which ran from 12:30 p.m. to about 8 p.m. - winners of the event were The Smokin' Torpedoes, who will make the trip to Memphis for the second time in as many years. It was an excellent way to spend a Saturday, sitting around listening to some of the best blues bands in the region, duking it out (with love and respect) and raising money for the Orange Blossoms Blues Society and their continuing mission: to preserve, present and promote the rich heritage of blues music here in central Florida. 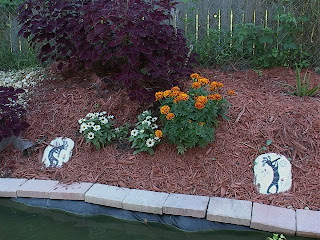 Jae, who is vice-president of the OBBS, and I both were exhausted after the record-setting event at one of our favorite establishments, McWell's, and we woke up today with no real agenda, save rehearsing "Rockin' Around The Christmas Tree" so that my darlin' can join me on the Christmas album, which will be finished this week.

So, I puttered a bit in the yard, pulling some weeds here and there, dropping some beneficial bacteria and barley into the pond, around which I've planted some marigold and zinnia. The Cuban oregano is once again growing like wildfire and so is the lemon basil, which was planted near the tomatoes not only for the benefit of the compost and deeper soil, but also because it is a preventer of aphids near the tomato plants. The things you learn online. 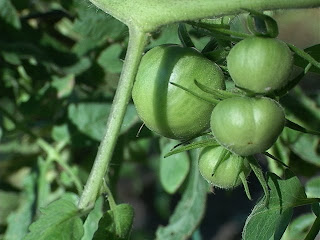 A couple of surprises today, which really made me quite happy. The tomato vines, which were looking kind of sad of late, have pressed on and are now popping out fruit all over the place. There doesn't seem to be any kind of pest presence (perhaps thanks, in part, to several families of spiders who have moved into position under some of the leaves) so I'm keeping my fingers crossed that we'll have a nice harvest in a few weeks. The lemon basil has grown so intensely that recent winds bent two of the branches. Considering that I've been using the herb for cooking every day, I decided that a pruning was better than letting the plant sit that way - so later on, I'll take the leaves, place them on cookie sheets, pop them in the oven and dry them, then crumble them into our lazy susan herb dispenser. Not as good as using the leaves fresh, but still oh-so-tasty. I've got some harvested thyme and tarragon that's been keeping me company in the studio for the past week and a pinch here and there into week night dinners has been a gastronomic and aromatic wonderland. 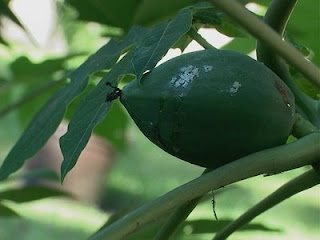 The other big surprise was what's happening with our papaya tree. Planted over a year ago from seeds out of a Key West papaya, we weren't sure how the little seedlings would do so far north. I had kept one set of plants in a container on the side of the house in the shade, which was later moved to the front of the house. Another group of seedlings were placed in the ground and took off like a shot, but unfortunately fell victim to trunk rot after our hurricane season brought rains enough to float an ark in the backyard. After I came out to find the poor thing collapsed on its side in the mud, I decided to plant the ones out front in the ground near the garden plot. Not far from the septic tank, this little group quickly took hold and shot up with little hesitation. Today, while surveying the growth and some pretty yellow blooms, I noticed what looks like a little papaya fruit. According to some research, the papaya tree begins fruiting within 3 years, but this seems a little early. Still - the plant is obviously doing well to manifest such a beautiful little green egg - more compost! I think she's hungry!

Speaking of hungry, our fish are out of control. After I finished sculpting the pond bed and placed the liner, filling it with water - I went to PetCo and bought about two dozen goldfish and a plecostomus, an algae-sucking catfish. Upon arriving home, I plopped the pleco in the pond and had two brief sightings of him in subsequent days before he promptly, and I guess, happily, disappeared into the depths, never to be seen again. Judging from the growth rate of the other fish, I'm considered about swishing about in the pond to retrieve fallen plant-pots and during routine filter cleanings, for fear that he'll rise up like that scene from "Jaws" where the shark surprises Brody as he's slinging chum from the back of the Orca. 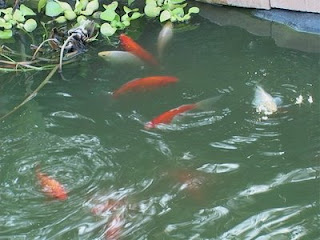 The fish were about two to three inches in length and not so pretty to look at, but the poor things were also crowded into one aquarium like ghetto tenement dwellers. Before laying out any serious cash on koi (I excavated the pond to a depth of 3 feet, to prepare for koi), I figured that the goldfish (at 12 cents apiece) would be a worthy investment to see if maintaining a pond was even something that I could accomplish.

As it turns out, despite perhaps four or five floaters that simply didn't make the transition well, not only have the majority of that first batch survived, they've also decided that our 900 gallon pond is one swingin' place to grow up and have kids. Not only have they grown into seriously huge goldfish, but their colors have turned brilliant and vibrant, deep reds and oranges, creamy off-whites and the first generation of babies have come out with cool racing stripes that look like the inverted designs of ocean clown fish. One guy, whom I've dubbed "Moby", is pure white and looks like he could eat a bullfrog, he's so freakin' huge. The second generation of kids has begun to appear and from that one initial bag of fish, the whole micro-cosm is simply teeming with life, from the fish to the frogs to the dragonflies, lizards, spiders and bees. Jae and I love to sit out in the herb garden next to the studio and just sit and watch the water roil with activity (especially at feeding time - holy cow, these guys can eat.)

Water plants are beneficial to any pond, providing oxygen and shade from the sun, among other things. Over time, I've had some success and failure with the water garden, failure with things like water lilies, horsetail rush and bloody dock, but success with calla lily, dwarf giant papyrus (great name), pickerel weed, corkscrew rush (which will probably never die), iris, water parsley (which will also never die), canna and elephant ear. My sister-in-law Sherri also gave me some water hyacinth, which is from South America by way of Mars - a crazy plant that doubles its population within two weeks. We started with one plant and it continues to multiply and spread across the surface of the pond. It provides food and oxygen for the fish, who love to push them around from one side to the other while nibbling furiously at them. 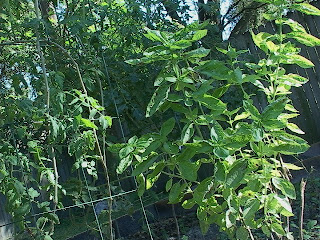 On days when I'm stuck away inside the house and overloaded with work - I like to come outside and do a little weeding, or just take a stroll around the house and breathe deeply, taking in our little backyard oasis. When Jae and I first began dating, there was absolutely nothing back there but grass. After we were married, I slowly began to do a little landscaping around the front of the house, creating planter beds and herb gardens. Now, we've got a little retreat from the world that's looking more and more like something you'd see at the Flower and Garden Festival at Epcot. Fountains and water gardens, flowers and rolling hills, tomato trellises and aquamarine canopies with tiki torches everywhere. And there, in the middle of it all, is the Great Architect, Designer of Life, Creator of All, living within us and outside of us, all around us. The eco-system in our backyard is a constant reminder of our place within the web of life. We are not merely observers of it, but participants within its daily cycles. Visitors often depart here with potted plants as we encourage others to actively get in touch with the soil of the Earth and the harvest of our souls. The lessons to be found within the unfolding petals of the rose or the daily miracle of the purple trumpet flower. The medicines of the plant, the healing that comes from the ground. Completing the cycle and getting our hands and feet into the dirt, communing with every element.

It's easy to get out of touch with the planet - but it's just as easy to get in touch, too.
Posted by Bing Futch at 3:34 PM