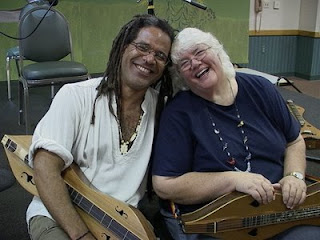 It was perhaps 2005 or 2006 when I really got serious about playing the mountain dulcimer and it was all because of the gift of a book.

The book, Mel Bay's Dulcimer 2000, featured a host of mountain dulcimer luminaries with their recordings and tablature for dulcimer solos. Up until this point, I had been sort of in the wilderness (no, not "sort of", way out in the wilderness eating locusts and honey) with my playing and it was a huge wake-up call: "oh, so this is how you're supposed to be doing it."

Two of the names/faces I recognized, Rob Brereton, since I owned his CD "Someone To Watch Over Me" and had worked side by side with him for a week or two out at the Folkcraft shop at Walt Disney World. And, of course, Bud Ford, whom I had worked for, but had never met in person. The rest of the folks were all new to me, and each presented a unique approach to the instrument. I began to work my way through the tunes, with each performer as sort of a mentor. Would I ever meet any of them? I figured that would be unlikely.

How wrong that concept turned out to be!

Janita Baker, Susan Trump, Jerry Rockwell, Shelley Stevens, Bill Taylor, Don Pedi, Lance Frodsham, Neal Hellman, Lois Hornsbostel and Carrie Crompton. In the past couple of years, I've met them all, and have even had the pleasure of jamming with them on the tunes that they taught me.

Also included in that book is an arrangement of "Planxty Fanny Po'er" by Madeline MacNeil, who used to publish Dulcimer Players News. This past weekend at The Great American Dulcimer Convention, I rode up with Bill Taylor and got a chance to meet Maddie on the first day; what a delightful woman she is.

The entire weekend was quite a blast and in a mind-blowingly beautiful location; the Great Smoky Mountains of Tennessee and Kentucky. Hung out with some familiar folks like Anne MacPhie, festival organizer, The Kentucky Standard Band, Alan Darveaux, Bill, Dan Boone and Dale Poling and some of the attendees. And met some new acquaintances, including Lisa and Heather Malyuk, two young ladies who have a long and wonderful career ahead of them both. Alan's band, Slight Departure, was another huge highlight and it was great to hang and jam with them after the Friday and Saturday concerts. Video from the weekend is now starting to show up through the DPNews Online Video Podcast.

Basically, it was all over too soon, and way too much fun. Now, I'm back home, working again on the Christmas album, gearing up for some solo and Mohave shows, cutting video and tending my garden with green-thumbed pride.

Life's a beautiful blessing. And now that October is here - the weather will, literally, take a chill, the energy will begin to change and reflect the autumnal equinox, which always casts a warm, earth-rooted light upon everything. Pinch me, but lightly. For I know that I'm not asleep.
Posted by Bing Futch at 4:40 PM