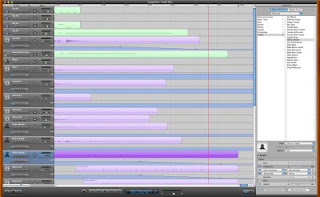 I've been burning the midnight oil this week, trying to get "Christmas Each Day" finished before Halloween weekend. That will leave me plenty of time to get them duplicated, sent out to appropriate radio stations and ready for shipping three weeks before Thanksgiving. The sense of accomplishment at this stage is enormous, for many reasons. The time factor. The research and development phase. The-so-many-other-things-going-on-effect. But Mr. Eleventh Hour here didn't do too bad with kick-starting the project after three years of "I should..." which turned into three years of "oh, well maybe next year." I even got started in August like I promised - last week of the month, but still August.

I'm using Garageband, which comes bundled with Mac computers - it's an excellent program and it's amazing what you can do with something that's valued at around $40. The drawbacks to recording your own album have much to do with having to engineer and perform, which can drive you bat-crappy. Also - I'm set up as a project studio for film scores, which involves not a lot of live microphones. So, there were plenty takes ruined by helicopters, passing boom cars, not-so-distant sirens and meowing cats who open doors by themselves.

Now, from scratch, I've got sixteen tracks that are in the mixing process and the two most difficult tunes are pretty much completed. "Go Tell It On The Mountain" ended up sounding a lot more gospel than I thought it would, since I was aiming for a sort of roadhouse blues approach. Once I got the backing vocals in place and a little blues organ, it really took on a life of its own.

I'm also pretty stoked about "Jingle Bells", a tune for which I didn't have any big plans. The biggest deal about this version is that it is, verse for verse, the same lyrics as the 1857 original. Unlike the tune that we tend to sing today, this story goes much deeper than just "dashing through the snow" and laughing heartily while in a "one-horse open sleigh." Nay. This version features hot mamas, sleigh accidents, the need for speed and even a dose of schadenfreude
. In other words, it's more like life. I love it. And recording it was too much fun - from the traditional arrangement, complete with key changes and sound effects to the eight-part choral vocal arrangement at the end that came out sounding like a mixture of "Yellow Submarine" and the theme to "Knott's Bear-y Tales." There's a lot of fun here and it's probably my favorite track on the entire album.

Samples will begin showing up on the website of all the songs, but here's at least one full song to give you an idea of what I've been up to.

The album is available for pre-sale from my online store - which means that when it's finished November 1st, orders will begin shipping out in time for Thanksgiving, typically the time that people start to get into Christmas music - although officially, at our house, it's the day after.

Except this year.
Posted by Bing Futch at 10:22 PM