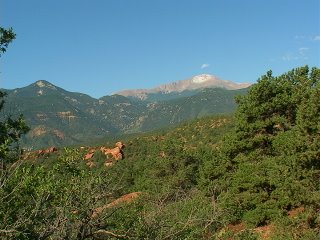 No alarm clock was necessary. Wakefulness came bright, early and once again accompanied by hummingbirds just outside the open window. Mindful of the fact that I'd be going straight from the Garden of the Gods to Soda Springs Park for the 11:15 a.m. set with Robert Force and Bud Ford III, I wore something different than the day before, packed Angelique into the backpack case, grabbed the video camera and wished Rick a happy Sunday. The weather was brilliant; cobalt blue sky, wisps of light clouds here and there. Daytime was fairly crackling with a vibrance that seemed ultra-real. 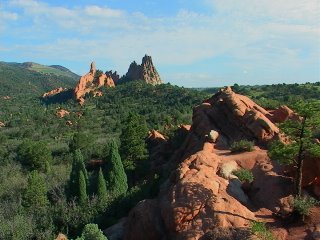 Stopped at the Sinclair station and got a blueberry muffin and a cup of coffee. Decided against setting the coffee cup on the floorboard between my feet and opted to cruise along slowly towards the Garden, holding the cup gingerly in my left hand, which also held the handlebar grip. The wind chill factor was right brisk for an early morning scoot and the coffee was doing wonders, along with the huge flannel that I had borrowed from Rick. Rode for about a mile and then decided that riding with coffee was a hellaciously stupid idea; stopped and swatted the rest of it down. That was gonna kick in quick. 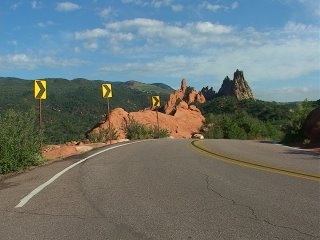 This early in the morning, the tourists had yet to stir and the winding roads of the Garden were mostly empty, save for a handful of die-hard you-name-its. Joggers, cyclists, bikers. Not many, just enough to have a sort of communion. The nods or smiles or greetings that are exchanged as you drift through the magnificence of natures big ol' footprint. It's an acknowledgement; we're all here because of this. There's unity in appreciation. But mostly, it was open road and the Vino flew like a hummingbird, darting this way and that in the 20 m.p.h. zones at around ten above that. Stopping only to be knocked-out by some incredible new view that shouted to be photographed. 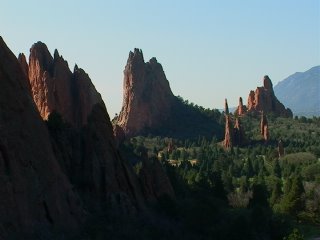 The previous day's explorations had revealed what I knew to be the spot that I'd return to. On the east side of the park was an overlook that offered a commanding view of the Gateway. Riding up a bit of rise in the road, twisting upwards to the left and then you're smack in the middle of this panoramic view. It's enough to put anyone's brake lights on.

In the previous day's divining, I'd been led to a spot just west of the overlook, by Pullout number 9, where I scrambled up the mountain, through the ground-dwelling prickly pear and assorted scrub, to a clearing that afforded a view of the Gateway in all its glory. 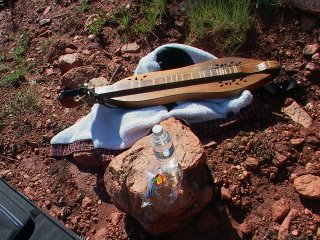 Unpacking Angelique, I set out food and beverage, got all good and stretched out, then sat and ate breakfast and let the energy of the place infuse me.

And then, after putting away my trash properly to be disposed of later, I sat back on the backpack case (which made a most rewarding seat in all of the rocky red soil) and started playing.

I'm not sure how long I played. But at some point, I became aware of the need to hop back on the scooter and roll into town. Which I did, with a big fat smile on my face. 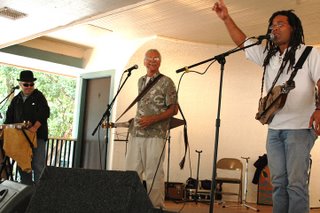 I arrived at the back of the stage and parked next to the Vespa that Robert was borrowing for the weekend, walked around the side of the pavilion. The morning gospel set was in motion, still the first act. Chilly Winds would be up next, followed by what was billed as a Dulcimer Jubilee "Bing Futch" "Bud Ford III" "Robert Force" et al but we had taken to calling it Bud a Bing Bud a Bob after Bud blanched at the idea of calling it The Bud III 3. Personally, I like F3, but that sounds more like a button on your keyboard than a dulcimer band.

The three of us came together by the rear of the pavilion and sort of tossed around basic concepts. Robert and I would play standing with the dulcimers strapped to us, plugged in to cube amplifiers with a moderate level of effects; Bud would use a microphone to amplify the dulcimer and stand at a stationary place with the instrument on a stand. We'd start with "Wellyn" and then, all bets were off. Having seen glimpses of this throughout the weekend, it was clear that the audience wasn't sure what to expect, but some had been asking about it. The seed had been planted, apparently. 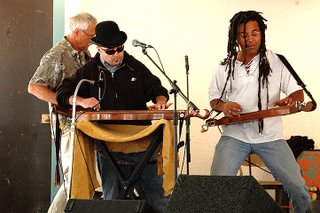 Again, can't wait to see the video. This time, we had a three-way ballet going on, with Bud and Robert leading off on some of Robert's old tunes and my contributions leaning in some rockabilly rave-ups and one extended jam of a song that was like something you'd hear on a smooth jazz station. It was all over the map and more fun than a week at Walt Disney World. At one point, Robert and I both went over to Bud and were all jamming around him. Not a moment of it rehearsed, complete with stage leaping and Robert playing dulcimer behind his head - all I know is, it was more fun than I've had onstage in a long time. Big laughs and smiles all around and the audience really showed their enthusiasm for it. That's the biggest blessing of them all, isn't it?

At this point, I had seen all the performers and enjoyed their sets. Unfortunately, there was a flight back to Orlando with my name stamped on it in the late afternoon and I still had a Dulcimer Shop to tour. I was already missing the little place, this little bubble of beauty high up in the Rocky Mountains. But one of the high points of this journey was still ahead, so there was no time for tears.

Bud Ford unlocked the door to The Dulcimer Shop and lead the way through the store to the basement where production actually took place. Bud III brought up the rear.

"Watch your head," Bud Sr. said as we descended a short flight of stairs. The Ford's are diminuitive folks, making some areas of their custom working space hazardous to the moderately tall. With a slight stoop, I followed along with twinkling eyes, taking in the layout of the room. It was like Santa's shop! Bandsaws and buzzsaws and sanders and grinders and long things on cords with vacuum ends, stacks of raw wood and whole tree trunks, the sides and fronts and backs of dulcimers in progress, hanging about and resting in clamps and jigsaws. The fluid beginnings of guitars rose from out of the machinery, some bare and others glistening like wet seals. Bud Sr. moved from item to item, describing what it did and at what stage the dulcimer or guitar was at. I saw patterns for futuristic solidbody electrics and a very special machine that etched patterns into wood with a laser! After demonstrating the laser with a piece of scrap wood, I had decided that a person could get lost in such a place and never come out. Essentially, that's basically whats happened to Bud Sr., who didn't go looking to get into the dulcimer-making business, but found himself there anyway.

Now, Bud III is learning the craft from his father, though the elder seems somewhat concerned with the future of a family tradition that began over 30 years ago. Bud III wants to play music and tour and you can't blame him. Every musician should do it once. The grass roots experience of performing for audiences in many different parts of this country and, if you're really blessed, the world. I'm hoping to see it all come to fruition. That Cripple Creek Dulcimers will continue for another 36 years along with another 25 for the Mountain Music Festival. I'm hoping to see Bud III get his music going on a fast track to the touring circuit and I hope to share the stage with him at points along that route. Sharing the music is one thing, but sharing the dulcimer is another thing entirely. There's something about this instrument that's very much like Manitou Springs, Colorado. It's got its own magic, its own way of sneaking up on you and making the connection and it's got its own unique community, always looking for one more to come aboard.

I packed my stuff, set it aside, thanked Rick profusely for being an amazing host, then motored down to the park to make the scooter hand-off. Goodbyes were said, connections reaffirmed, blessings given and received, and then Erin Ford swept me away to the airport. She's grown up in the town and sees where it's beginning to change. Change is good, but some things should always remain. There's value in tradition, if it's balanced with progressiveness. The trick is in finding the balance.

And you have to drink a lot of water, breathe a little deeper in the Rockies, if you're going to stand up straight.
Posted by Bing Futch at 8:55 AM