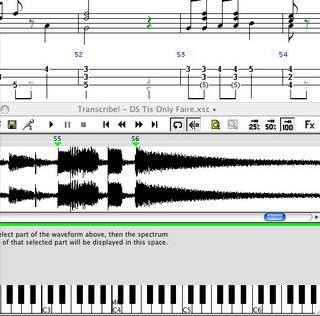 Up at Kentucky Music Week, Stephen Seifert showed me a cool software program that he had on his laptop. Called Transcribe!, it's an utterly amazing creation that analyzes your audio files and isolates the frequencies that make up music, which allows you to transcribe music with unbelievable ease. I knew this was going to come in handy.

There is also a notation program that's legendary called TablEdit, which I've had in a demo version for some time, finally registered and unlocked all the features - it's twisted. Just wicked, twisted software; and the combination of the two is really apalling. Disgusting. I love it.

There's this piece that I've recorded called "Tis Only Faire", which was an improvisation, so I didn't have music and couldn't duplicate it by ear. I mean, maybe I could've tried, but the rush to make it happen didn't become apparent until these two programs sort of ran into each other. It took some doing, but now I have a pretty faithful publishing of "Tis Only Faire" which I'm in the process of converting from the .tef file to a .pdf., for those who don't have the program, although there is a free .tef viewer available from the site, which lets you really enjoy how cool the program is.

This is going to help tremendously, at least until I can get back to school. In the meantime though, it will help as I start working on the curriculum for my DAA workshops.
Posted by Bing Futch at 10:56 AM