A Knight Of The Round 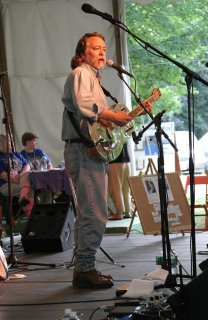 Central Florida Folk had another one of its shows in the magnificent backyard of Mark Fodor. Deep in the heart of Orlando, this place is a little garden of eden on a resedential street; two stages, nicely landscaped. Bring on the potluck and a donation for the artists and invite the neighbors, that's how it rolls out. Last night, it was Bill and Eli of BluesGotUs and the incredible Scott Ainsley, whom Eric Clapton once called "the most important blues musician who ever lived."

Both shows were great - Bill and Eli are a fun couple and Bulldog Ben sat in on harmonica. Scott Ainsley was amazing. His presentation laced the authentic music with stories and history that made the music come even more alive. His picking was simply jaw-dropping, he sang the blues with great pain. I'm kind of embarassed that the crowd was so small; the CFF hasn't been able to successfully promote these shows in this beautiful space.

After the show came the jam, though not as usual, because everytime, it's different. Last night, we sat in a circle on the second stage, bathed in blue floodlights, and introduced songs. In the circle was Susie Cool, Bulldog Ben, a younger man from Tampa named Toby, CFF president Barry Brogan, me and Scott Ainsley. I tuned to open C, thinking it would give me more options; lucky guess. Mark Fodor made a sly song suggestion in the shape of "Flowers On The Wall" when it came my turn to toss in - so we did a pretty rowdy version of it. When it came around again, we did "Interstate 10 Blues" - and MAN did it smoke! What an honor to sit in a round of musicians like this and pass that ball. I had the four string and six-string handy (with Angelique on stand-by in the truck, in case we'd be plugging-in) but ended up going with the six-string ("Nikki") all night. With two steel resonators and two guitars, the dulcimer needs to double efforts to compete. (Two words that musicians hate to hear: turn down. Two more words that musicians hate to hear: gotta tune.)
Posted by Bing Futch at 12:03 PM