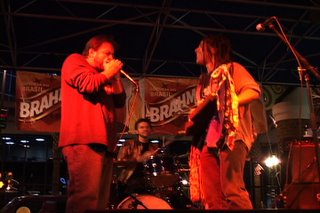 Fat Tuesday rocked - it was a great day for music and food, chilling with friends and celebrating life. The other bands were great, High Octane, which is Chuck Zayas' new band (he of Rocket 88 fame, as well as Nutrajet, for a brief and highly experimental time), Cosmic Sweat Society out of New Orleans, who really put on a hell of a show, and our friends Cadillac Recipe who put the crowd into the dancing mood.

The Mohave set was extremely pleasurable; it felt good, sounded right and was nothing but fun from start to finish. Mark and Rob truly stepped up to the plate and delivered home runs across the board and Uncle Charles really fired up the mix - it wasn't the first time I'd jammed with him, we'd done some big jam sessions at Hard Rock Live with about twenty people on stage, but we'd never actually had a chance to go one-on-one and it was really quite fun. At one point during "Caught", we were trading licks with each other during the break.

Steve, the sound guy, was really on it, kept it sounding incredible out front (as evidenced by the video) It was good to be back onstage again, playing this music, good to see bodies dancing and smiling, bopping heads and making noise. It's a real good feeling to communicate the vibe and pass it around. That's going to be something I pay close attention to in the coming weeks. Developing stronger connections and rhythms to truly get inside of the music.

We should have some info about upcoming gigs soon - in the meantime, check out these photos from the show, taken from video shot by our Goddess of a friend, Tina DeMasi.

Thanks to all who came out to party with us - yes, we were hurtin' the next morning!
Posted by Bing Futch at 12:55 PM