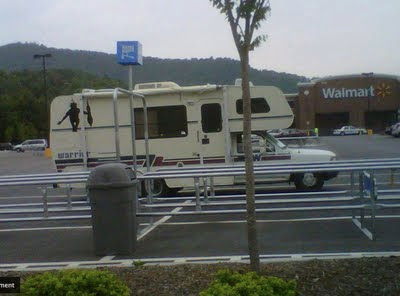 (photo courtesy of Suzanne Shires Upton - who happened to drive past and saw Rita parked there at Walmart in Asheville.)

El More cooked another fantastic breakfast (he makes the best eggs over easy that I've ever had) and took me on a little tour of the area, including the site where Grandpa Jones is buried. After saying goodbye and thanking him for his peerless hospitality, I hopped on the road and it was about five hours before I got into North Carolina. It hadn't been too long since I was here the last time (late last summer), so finding my way to a local Walmart in South Asheville was fairly easy.

After obtaining permission inside (gotta know your parking lot protocol), I picked up a few sundry items and then proceeded to fix up a spinach salad and then seek out a pay phone on my mountain bike. (Good thing it's a mountain bike because, you know, I'm in the mountains.) Turns out that public pay phones, even inside the local Applebee's, are becoming an endangered species and I had no luck. Feeling a little disconnected from the world I spent so much time in, I opened the windows, folded out the couch and had a very nice sleep with the mountain temperatures and a slight breeze keeping everything nice and cool.

I awoke at around 7:30 a.m., prepared a breakfast of bacon and eggs with some ground beef and cheese, then headed out for Black Mountain, where I picked up a Virgin Mobile phone, activated it and then sat in a parking lot, having discovered a wi-fi signal, and did a little catching up.

Registration begins in less than three hours for Dulcimerville. I'm looking forward to a fantastic week of music and fun on the mountain! I will have wi-fi in the room that I'm sharing with Stephen Seifert, so if you're trying to get ahold of me, I will be checking my e-mail frequently.

The adventure continues....
Posted by Bing Futch at 11:03 AM