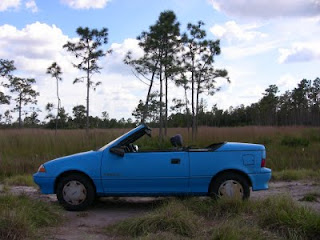 In these final weeks running up to the start of summer tour, my faithful road companion Buster, a 20-year old Geo Metro LSi convertible, sprung a transmission fluid leak out of a rusted part of his underside, thereby officially rendering him unsafe to take on the 3,000 mile first leg. He's not down for the count yet, and will be fine to scoot around locally. But his days of careening from one end of the country to the other are over unless extensive body work is completed.

The next option would've been to pay around $900 for a rental car (compact) and about $1000 for lodging on the days where I wouldn't be hosted by either a festival or a host family, not to mention fuel with rising gas prices on the march. Jae and I had been talking about getting me into a RV of some sort for a while now, a move that would effectively remove the cost of staying at motels and hotels along the way while also providing more space to carry all of my instruments, books, CDs, P.A., lights and other gear. I'd also be able to prepare my own meals, thus saving a tremendous amount of money altogether. Of course, getting into a camper is an expensive proposition all its own and we simply weren't prepared for this kind of setback, especially with a June 4th tour starting date just around the corner.

Inspired by bands and solo artists, both unknown and nationally recognized, who have offered special incentives of music, concert tickets and other items in exchange for varied donations, I decided to give this idea a shot in hopes that I could raise enough money to purchase a used, late-model RV, and avoid taking out a loan and tacking on huge monthly payments for a brand new camper. Thus was born THE RV PROJECT.

If you visit the above link, you'll see the various offerings which are compounded with each successive donation level. ANY DONATION, no matter how small, will help in this quest. Initially, when the e-mail went out on May 12th, shortly before midnight ET, I had set the fundraising goal at $2500, hoping that amount would be enough to cover the cost of a functioning Class B van camper, since some of the larger Class C and Class A motorhomes were not only more expensive, but also not very fuel efficient. What I soon discovered was that, for that price, most of the offerings were officially antiques, or lacked most of the necessary features that make life on the road functional. So, the goal was re-set to $3500.

By morning on May 13th, over $700 in donations had rolled in. I began posting pictures of the campers I had gone to see or was considering going to see and that's when people who really know about the RV lifestyle began to comment. "That's too old", "that's got water damage, bad news", "you'll need a generator", "be sure you get into something safe." It became apparent that though I was trying to keep the budget around $3500 - most of the reasonably outfitted RVs were still out of reach. With less than three weeks left, I wasn't sure if I had a choice in the matter. I'd have to pick something to get on the road.

The Mercury Threatens To Break

It was while doing my daily exercise walk in the park that a number of donations began to roll in. Astonishingly, by 5 pm ET, $3,420 in total donations had come in. Absolutely stunned by this development, I raced home and began reading the e-mails which basically said, "you're not going to find anything safe, comfortable or trouble-free for $3500. Set your sights higher. We want you to arrive in one piece."

Now, I honestly don't know if all of these donations are coming from folks within the dulcimer community or if it is a mixture of all kinds of people, some of whom have chosen to remain anonymous. If you've looked through the donation offerings, I can tell you that at least one person will receive a visit from me during a time in which I will be gardener, butler, cleaning service and chef, not to mention putting on a private concert.

Do you know what my horoscope said today? "It'll be a social day, and you'll share a strong emotional bond with a pal or group of friends. It's possible that your mutual interest in an unusual hobby or humanitarian cause will be your focus." Wow.

I am simply overwhelmed by this outpouring of support and, reading the emails and Facebook posts, it's once again very clear to me just how incredible a world I've been living in for the past six years.

Based on e-mails, I already know that the goal of $3500 has been met. And I'm being urged to continue accepting donations in order to afford a camper that will be safe, functional and last for more than just a summer. In the first 24 hours of THE RV PROJECT, this has already been an amazing, emotional adventure, one that I'll be sharing here, on Facebook and in-person as I travel across the country from Connecticut to California and back again this year. I'd be content to pick up this Ford Amerigo that I'm looking at tomorrow, but it does lack a generator and I've been told that having one is an absolute must. Class B and Class C campers with generators start to be found in the $6,000 to $8,000 range around central Florida. Bearing in mind that I need to travel to inspect the vehicle, many of the deals folks have found for me out of state are not practical to attempt, especially with a deadline approaching and the need to get whatever RV I settle upon dutifully registered, insured and prepped to go.

So, this is what I'm going to do. Time truly dictates both availability of my options as well as the time in which to close the deal. With the funds raised thus far with your kind and loving assistance, I can continue with an expanded search for an ideal coach. Knowing what I know about the bureaucracy of the DMV and anticipating whatever hoops I may have to leap through with our insurance company, I would say that I need to purchase something in about 11 to 12 days. With that in mind, I'm going to continue accepting donations with a new target of $10,000. If it's reached - it will certainly give me better options. If it's not, I have faith that I'll be able to get into something that will be well-suited for the road. If whatever I purchase ends up costing less than what I've received, then I'll apply the remainder to tax, title, insurance, gas, maintenance, all of those things that will be much more involved as the owner of a recreational vehicle.

Again, for those of you who have donated, I cannot thank you enough. I hope you will enjoy the many projects that are being offered as part of this fundraising effort and that I will get a chance to thank you in person. I'll continue to post updates and there will be plenty of pictures and video, not to mention lots and lots of music.

I have been extremely blessed since becoming part of the mountain dulcimer community. But this. This is just so incredible, it's almost too much to take. Thank you.

With all my love,