Studies in A for Diatonic and Chromatic Mountain Dulcimer

[For a reference starting point to this series, please visit the link for Studies in C for Diatonic and Chromatic Mountain Dulcimer.] 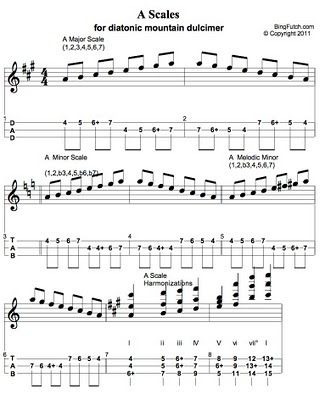 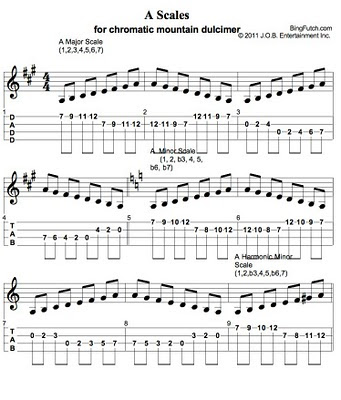 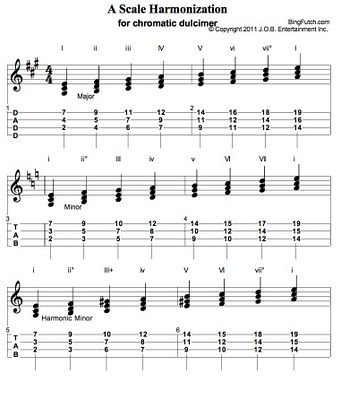 As we continue our study of the 15 Major keys and their relative minors (30 keys in all!) this year, I'd like to point out that the traditional Appalachian mountain dulcimer is not stuck in the key of D Major like some folks think. In fact, when tuned to dd-A-D (also written DAD or known as 1-5-8 tuning), performers of mountain dulcimer can easily play in six different keys without ever re-tuning or applying a capo. Beyond that, some fudging is necessary (such as barring and bending to omit or find missing notes.) In creating the worksheets for each of the keys, I was hesitant to include some of the more difficult-to-attain notes, chords and scales for diatonic (standard) mountain dulcimer, but decided to do so anyway. On the diatonic dulcimer scale sheet for each key, I show both Major and minor scales plus some scale harmonization. You'll notice that with the minor scales, there are some half-frets that you probably don't have on your instrument. For instance, in the A minor scale tablature, you'll find a 4+ to indicate the F natural. Whenever you see a + next to a fret number, you can bend that particular note to get the tone that's missing from your fretboard. It'll sound funky, but at least you'll be able to still join in on the studies (and bending notes is a good technique to have in your toolbox.)

In fact, diatonic players, it's not a bad idea to go ahead and download the chromatic worksheets as well, as they are chock full of extra information.

For example, harmonic minor scales are listed with the chromatic sheets as well as ascending and descending melodic minor scales. I figured that might be a little too much information for diatonic students, which is why that's not covered in the diatonic materials.

Remember how to build chords from these notes? Begin with the root (A) and skip every other letter to form triads. Some chords will be Major, others will be minor and one chord will be diminished:

Begin the Major scale from the sixth note and use the same notes (just in a different order) and you've got the relative minor scale. In this case, that scale would be F# minor. This is also known as the natural minor.

Same chords are formed when skipping every other letter.

Now, what happens when we keep the same root and switch to a minor scale? Let's go from A Major to A minor. What's the difference? We take the 3rd, 6th and 7th notes of the Major scale and flatten them; take them down a half step.

If you've been following along with our studies since the beginning of the year, this scale should look familiar to you. Why is that? Because A minor is the relative minor scale to C Major, which is the very first scale we took a look at! (No flats and no sharps.)

Major keys and their relative minors:

So now, we're at A Major - the relative minor is F# minor. Both have three sharps. F#/C#/G#. When changing A Major to A minor, the result is no flats or sharps. Do you see a pattern here?

Each time we've added a sharp, we've removed a flat. I won't go into detail on this yet (in fact, I'll save a look at the harmonic minor scale and melodic minor scale for two posts from now), but how in the world can you keep track of it all without having to memorize every single key? That's where the Circle of Fifths comes in. 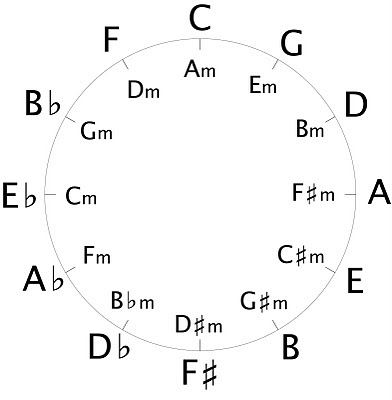 The Circle of Fifths shows all of the relationships between the 12 notes of the chromatic scale. It can be quite handy as a visual or mental tool (which is why I highly recommend memorizing this simple version of it and then discovering what it's good for along the way.) At the top of the circle is C, with no flats and no sharps. Then, as you move clockwise around the circle, you are moving in fifths; each of the notes around the edge of the circle are a distance of a fifth as you travel clockwise. What's more, beginning with G, you add a sharp for each note name (up to seven sharps total.)

Also, notice the interior of the circle. There, you have all of the relative minor keys right next to their relative Majors. There's another way of finding this. First, choose the Major key on the outside of the circle and then move "fifteen minutes" (four total note names) clockwise around the circle. The note you arrive at, simply call it minor and there you have it! See how that works counting from D Major (you arrive at B - so call it minor.) Remember to count the note that you start with.

A couple more things to mention. This is a simplified version of the Circle of Fifths, but I wanted to introduce it to you (if this is, indeed, your first encounter with it) without it being too terribly intimidating. One thing that you'll need to know about music theory is that some notes, intervals and key signatures are exactly the same as other notes, intervals and key signatures but spelled differently. For example, take a look at the Circle of Fifths and find Db. That's D flat Major. It's the same thing as C# or C sharp Major. We'll get more into that later on.

Also, it's not a bad idea to memorize the order of sharps and flats as they appear on the musical staff.

If you look at the Circle of Fifths, you may see some patterns emerging. Look closely.

This is where it gets interesting.

I know that there are many musicians out there who have been studying along with us and they play other instruments besides diatonic and chromatic mountain dulcimer. This broad overview of music theory applies to the general musical language. However, diatonic instruments are somewhat limited by design, so after this particular pair of key studies, I'll be taking a slightly different approach to materials for the mountain dulcimer. You may have noticed in the initial workshop materials for each Major key, I've presented the scales and harmonizations in a straightforward manner, although sometimes I've switched up a chord shape or two here and there. For diatonic, that has been necessary to make up for the lack of available notes within immediate range, so you'll see a little zig or a zag instead of a perfect staircase of notes, in the case of harmonization. Also, with the chromatic worksheets, I have been using a couple of different general chord shapes. Some, as you can see, are tightly bunched together. Some are spread out with spaces in between the next closest note. These are alternately known as closed voicing and open voicing. Again, we'll get more into that as we go along.

It's my sincere wish that you'll plug along with me in this general study of keys. Along the way, there are lots of music theory bits and bites that will come into play. What I've discovered in my years of study is that what seems confusing at first will slowly begin to fade into understanding, light bulbs will go on, patterns will emerge and once you've got a toe hold there - the world of music unfurls itself before you and you simply cannot get enough. Thanks for taking the journey with me!
Posted by Bing Futch at 4:56 AM