Ending On A High Note 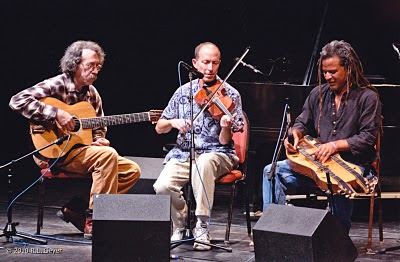 The Swannanoa Gathering rolls out over the course of five weeks in the Blue Ridge Mountains of North Carolina with the final week devoted to the music of mountain and hammered dulcimer. It was my first time experiencing this mix of community, family, instruction and beauty, leaving me breathless from the journey. Besides wonderful students in intensive workshops throughout the week, the fantastic fellowship among everyone, the gorgeous campus of Warren Wilson College and incredible food in the cafeteria and during mid-morning breaks, there was plenty of jamming to be had and evening concerts that entertained as well as enlightened. I, once again, had the distinct pleasure of sharing the stage with Ken Bloom and Ken Kolodner at the Monday night instructor concert, as well as joining Kolodner and Rob Brereton during the informal lunchtime concert series.

Jae and I are actually heading back up to this area of North Carolina this weekend to spend time with friends who are having a vow rededication ceremony in the mountains. I'm looking forward to sharing this beautiful spot of the country with my wife and also getting a chance to explore it some more, as I never left the campus during the week, picking and visiting and hanging around near the beer tent with the other students and instructors (now, a dulcimer festival with a beer tent, that's a novel idea!) 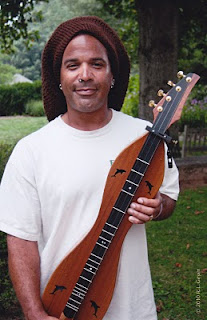 Next up: I'll be starting early tomorrow night at McWell's (5 pm) and performing throughout the evening for Simon Time Trivia, which begins at 8 pm. Then, Manitou is having a partial reunion in Manitou Springs, Colorado on Saturday, August 28th where our album "In The Garden Of The Gods" was recorded, followed by a gig at Cervantes Masterpiece Ballroom in Denver on Tuesday, August 31st. After that, I'm actually home for awhile (imagine that.)

I'm working on getting back into the groove of things - including updating "Dulcimerica" - but for now, I'll settle for cleaning the studio, getting caught up with e-mail and, of course, picking.
Posted by Bing Futch at 9:00 AM