Back On The Mountain 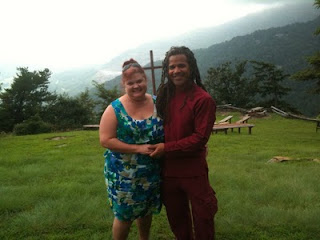 Jae and I rode into Black Mountain, North Carolina while the Sourwood Festival was in full swing. The tiny downtown was stacked with traffic as people sought parking spaces. We were headed to Cabin Creek Lodge, our digs for the weekend during which Steve and Kay Fernandez would renew their wedding vows high up on the mountain. Steve and Kay are good friends and have had me over at their Orlando home for a couple of house concerts - they also come out regularly to see me at Dicey Reilly's (now, once again, called O'Doherty's) and had asked me to participate in their ceremony, providing music.

Not only was it an honor to do so, but they also booked me into the Town Pump Tavern for a post-ceremony/reception party. The Town Pump Tavern has been around for 30 years and is a magical little place with a warm feel (partially due to the lay-lines that intersect at the stage.)

Just prior to our time in Black Mountain, Jae and I had stopped in Asheville and spent a couple of days there exploring the place. It was great to be back in the Swannanoa Valley and to be sharing it with her - even though the winding roads to get here nearly took her out. An avowed flatlander, Jae has a low tolerance for heights and curves.

All in all, it made for a magical weekend and the pictures from this North Carolina leg of the tour can be found here. 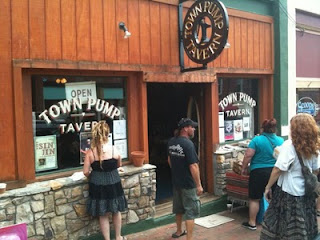 The Town Pump Tavern gig was a lot of fun (again, I played for three hours straight before a broken string forced me to take a four minute pause) and I'm looking forward to coming back some day. In the meantime, the next gigs on the horizon are this coming Friday at McWell's in Orlando; Cervantes Masterpiece Ballroom on August 31st with Manitou and a return to The Logon Cafe in Beaumont, Texas on September 25th! Details on these shows can be found by checking out my gig calendar at http://tinyurl.com/bingcalendar!

Have a great week and thanks to everyone who made this weekend such a blast!
Posted by Bing Futch at 8:12 AM