A little drone with your coffee? 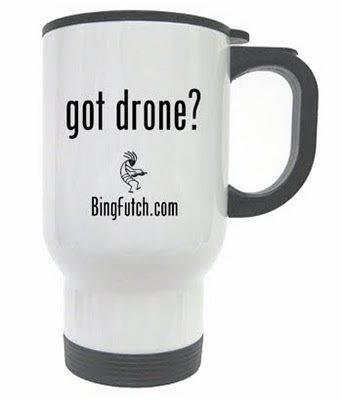 I really am a late bloomer.

Throughout my musical career, I've flirted with the idea of gratuitous merchandise like t-shirts, hats, printed thongs, the stuff you buy, but have been mainly focused on producing the music and getting it out there.

No, now I've gone all Bing*Mart and have officially cracked open a schwag store on Reverbnation. For starters, because there's more stuff to come, the "Got Drone?" line has finally hit shelves. Dulcimer-land has some pretty famous shirts, clever ones that people like. I know that "Got Milk?" parodies are so very 1980, but as a child of the 70's, that seems jolly progressive to me. The great thing about "Got Drone?" is that it's not just about mountain dulcimers for it could also be about bagpipes, hurdy-gurdy, vacuum cleaners, etc. 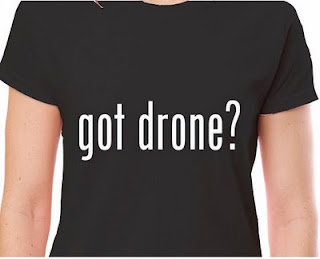 Not only t-shirts and tote bags but also stainless steel travel mugs for your morning coffee. The jury is still out regarding "Got Drone?" thongs, mainly due to available printing space and not so much about the social implications.

And then, there's the logo marketing. As many of you have no doubt noticed, I've taken particular care about establishing a cross-platform "look" for my websites and social media networks. In somewhat disgusting marketing-speak, this is called "branding" and though it doesn't involve vaqueros, iron rods or painful heat, it's still a slightly disturbing yet necessary part of raising your visibility in an ever-crowded marketplace.


Back when the internet first became commercialized and open to the public, people were hip to set up web pages, even though they had no idea what on earth to do with them. They'd labor intensively over the thing for a week, proudly set it up and then sit, blankly looking at their static web counters, wondering why no-one knew they were there. With the sheer amount of people rubbing virtual elbows with you on the 'net, you've got to somehow get their attention. Just long enough for you to show them what's inside the box, kind of like walking down a supermarket aisle when blammo! something leaps out at you visually and you have to go over and inspect it. Branding is part of the first line of attraction. Somewhere along the line, I managed to acquire some maddish design skillz, so I eventually came up with my own logos, colors, layouts, etc. If you're not a designer; find a starving art student/webmaster and pay them with Netflix gift cards.

Once you've settled upon a visual identity, allow that to be a common thread in your online presence. Much like the familiar red and white Coca-Cola logo, people will come to recognize you on a crowded shelf. This wasn't such a big deal when mom and pop ran the places, but with more and more of a big-box approach to commerce (aided mostly by the internet and not so much the big box stores), you have to shout awfully loud to be heard even half of once.

You'd think I'd have long been into the merchandising side of this, having really dug into the whole branding concept, but two things have kept me from stocking up on logo jewelry, embroidered toilet paper caddies and signature pool covers.

I know. It may seem like I'm on a $&#%@! boat a lot of the time, but remember, the boat was rented. Just like the tux. Great ideas cost great amounts of money and, without investors or that flash-in-the-pan success and advertising, you can end up a million-seller ("got a million of these in the cellar.") But when Reverbnation suddenly opened up a way for artists to sell 0n-demand merchandise, well - that changed everything. You can design your merch, have them pay for production and ship it as well. That is treat-filled. Wish I could work my books and CDs like that (and I know that I can - just have to put that in motion.)

Granted, the retail price of the items is pretty much eaten up by production costs - so what's the profit? The profit is in extending your visual reach beyond the internet. Just the fact that anyone would want to wear a t-shirt with your name on it should be enough to make you pretty happy. What then exceeds happy and clutch-shifts into overdrive glee is knowing that X number of people may see the shirt (or mug or thong), have your name or band float across their frontal lobe, file it away under "Google This" and before you know it, you've got another click on your page views.

Strict marketing talk can be a soul-numbing experience, so be sure to remember that both you and the people who embrace your mission are just that: people. And more important than any flashy bling or schwag is what you have to say, how you say it and what effect it has on others. Sure, there are those out there who are all icing and no cake. But take one bite of that and you may be prone to pass on that particular brand (unless you're an all-icing kind of person in which case there's a special level of misery reserved just for you.)

Now, having said all that, can I interest you in a "Got Drone?" chamois?
Posted by Bing Futch at 8:53 AM