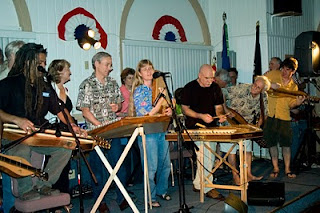 It's been awhile since I've posted here, mainly due to keeping up information on the Key West Dulcimer Fest website.

What a blast and what a joy! The festival ran smoothly, the weather was amazing and we're looking at 2011 for our next time around.

There are lots of little details that have been floating in and out of focus since the final day; moments of music, leaps forward in ability, all of the minute things that combine to create a wonderfully eye-opening experience.

Huge thanks to Folkcraft Instruments for their sponsorship of the festival and the hard work of Richard Ash on-site, connecting with instructors and working on dulcimers. Stephen Seifert and I have been talking about low action vs. high action (we've both been huge fans of low action) and finally decided that a higher action was necessary for the styles of playing that we both employ. Richard raised the action on three of our instruments and the difference is incredible. Sure, you have to work a little harder, not much, but enough to win great results. The dynamic range of the instruments have opened up and, dare I say it, has made them just a touch louder. We went with low action to make fretting easier - but I offer that anything totally easy won't yield the best results. It's like working out - the harder it is, the greater the reward (or something like that.)

There will be video coming along in a little while, some more recollections and announcements of dates and instructors for the next festival - soon!
Posted by Bing Futch at 12:59 PM