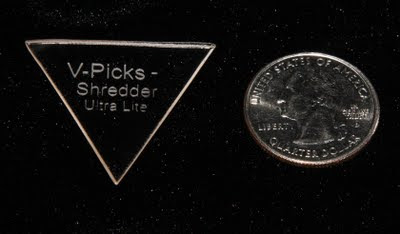 I've been using V-Picks since July when Vinni Smith laid a ridiculously huge pick on me at Summer NAMM Show in Nashville and automatically boosted my performance. As musicians, we tend to put a lot of weight on ourselves to make the music happen, and for good reason. We need to figure out the musical language so that we can speak truth to what's inside of our spirits, which means getting all this rhythm and individual notes and chords and stuff figured out.

But so much of how we sound as players is also dependent on our gear, from the caliber of instrument that we play to the amplification system that we play it through. For mountain dulcimer players, things like strings, tuners, string lubricant, wrist-rests, foot-rests, lap pads, straps, slides and picks all make a huge difference on how we play. The great Dave Para, musical partner (and otherwise) of Cathy Barton, is on a self-proclaimed "pick quest" right now and this guy shreds some acoustic guitar, as you know if you've seen them perform. So why does someone so obviously and richly talented suddenly decide that they need a new pick? Preferences change just like people do. Maybe a new approach to strumming or flatpicking demands a new pick to keep up with said demand.

I used to play with a Dunlop .44 mm nylon pick. Nowadays, I look back at those moments in time and wonder how I could have ever managed to play half of the stuff that I do now. The answer being: there's no way. However, I wasn't playing the stuff that I do now back then, right? So, as my repertoire changed, and so did the amount of flatpicking, so then my need for a firmer pick emerged as well. 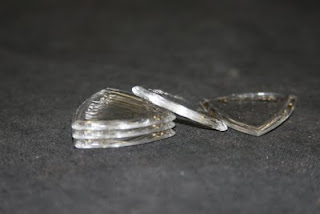 Problem is, many people like to have a thin pick for strumming. Least amount of resistance to the strings so that you don't launch the pick. That kind of reasoning makes sense until you analyze it a bit. By using a thin pick and really going at the strings, you are actually increasing the amount of resistance to the pick because you are using more force behind each strum, which means you have to either grip the pick harder or find clever ways to make the pick stick with you. This manifests itself as bits of sand paper, sticky tape or the patented product Gorilla Snot (I kid you not.)

Playing with a thicker pick forces you to relax not only your strum, but your grip as well. It makes you think about your playing in an entirely different manner, and maybe that's not what you want to do with the mountain dulcimer. But if you're trying to coax more performance out of your instrument (and you), thicker is the way to go.

I'd played around with all manner of picks, from the Tortex to the Herdim, large and small, pointed and rounded, nylon and thermoplastic, tortoiseshell and steel. Then along comes Vinnie with his see-through cast acrylic picks with the insane bevels and blew my mind with the immediate improvement in my playing style. 80% more volume (which meant I could ease up on my strumming), 50% more speed, thanks to a relaxed grip that comes naturally when playing with one of these picks. I was an instant convert and he gave me a few other models to try out. 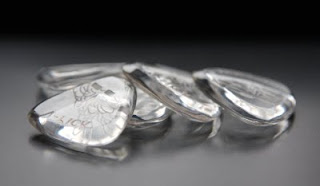 Since July, I've bought a number of these picks and have been experimenting with both flatpicking and strumming. The last thing you want is to have multiple picks for multiple applications, at least when you're playing on stage somewhere. For in the studio, no question that it comes in handy. If I'm doing an all flatpicked piece, I'll easily lean over and grab something huge with a mighty bevel like the Big Fattie or the Acoustic.

The different bevels along the edges of the many, many V-Picks contribute a variety of effects to your playing, from warmer tone to louder volume to a slicker surface that encourages faster playing. Some of these thicker picks, however, also yield a certain amount of pick noise, which, depending on your style of playing, may be desirable or not. I like a certain amount of transparency to the pick noise and, up to this point, the Herdim yellow has done a pretty good job. It took a while of experimenting with V-Picks until I finally came to the Shredder Ultra-Lite. It's about the same size and shape as a Herdim, .80 mm thick with a nominal bevel. I find that, strum for strum, the amount of pick noise is the same as a Herdim yellow (which is to say, virtually non-existent.) Volume is definitely up and the tone is just a bit higher than a Herdim. So I began asking Vinnie about the science of the bevels and what it would take to yield a more mellow tone without sacrificing volume.

He's been in the laboratory on this one and the first couple of V-Pick batches have been experimentally fun - we are basically on the way to developing a great, 21st century mountain dulcimer pick!
Posted by Bing Futch at 9:23 AM