On Top Of Old Smokey 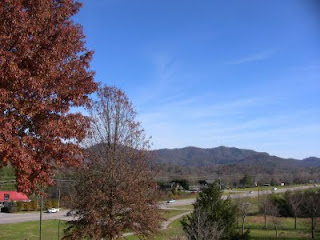 Autumn in the Great Smokey Mountains is a beautiful thing. Crisp air, blue skies, foggy mornings that transformed into glorious golden afternoons filled with music that ran well into the late evening. The occasion was the 2009 Smokey Mountain Dulcimer Retreat organized by the Knoxville Area Dulcimer Club. Townsend, Tennessee was where it all took place, so it felt a little like coming home after my past visits while performing at the Pickin' Porch at Wood 'N' Strings Dulcimer Shop.

Lots of great instructors like Bill Taylor, Maureen Sellers, Terry Lewis, Dan Landrum, Jim Miller, all folks that I've gotten to know over the past three years. And lots of neat folks that I've also gotten to know through the travels between dulcimer festivals were there as well - plus some new friends that share a love for this cool little instrument. 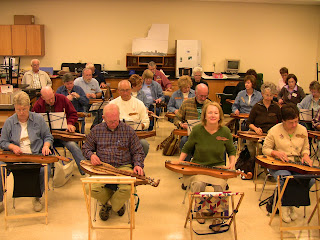 I taught flatpicking and blues for dulcimer; both classes had a real good time after they finished reeling from the amount of theory that I taught. It's my goal in every workshop to introduce a little bit of theory in order for people to get past that deer-in-the-headlights phase involving the "t" word.

After the weekend - I came home for just a couple of days and am about to head out for the NGFDA Fall Festival at Unicoi State Park in Helen, Georgia. Whereas it was my first time at the KADC retreat, this will be my third year in a row at Unicoi and I'm really looking forward to the intense number of workshops that I'll be teaching and the four awesome nights of concerts. Plus, I've got a day free (Saturday), so I plan on hanging out in Helen; the cutest little Bavarian/North Georgian town you ever saw. It's always Christmas there - so might as well bring home an ornament or two. Maybe some schnitzel. 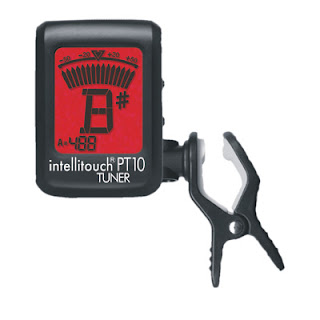 Picked up a new tuner from Mike Clemmer - an Intellitouch PT10 - a huge improvement over their past models.

Mark Wilson of Onboard Research, the makers of various models of the Intellitouch, had this to say: "Competition keeps progress flowing, and we have greatly benefited from the influx of lowcost tuners that adopted the clip-on approach to tuning. We at OnBoard have gotten feedback over the years from thousands of PT1 users who described the features and capabilities that they liked, as well as the little things that did not like. So we decided to design a tuner that was small and compact, very lightweight, with a very bright backlight, a clamp that won’t loosen up and fall or get knocked off an instrument, and nestle it snugly behind the instrument’s headstock where it can be seen by the musician but not be distracting to an audience.

Plus, while we were at IBMA, someone approached us with the idea of a light that would change when the string went in-tune, and suggested this approach would make tuning faster because the switch in backlight colors could be seen in peripheral vision, allowing the musician to stay in better contact with the audience during necessary tune-ups. We implemented a design that glows red when out of tune and snaps to green when the string goes into tune, and the effect is stunning. It really does make tuning easier and faster.

Lastly, although many people prefer the Intellitouch arrow display, we heard from other people who expressed appreciation for the traditional needle style of display. Therefore, for the Intellitouch PT10 Mini. we are tipping our hat to the needle displays of the world and offering what we believe is the best one available."


No lie there. I've got two different models of the Intellitouch tuner and this new one makes them both seem rather antiquated. You can get yourself one here.
Posted by Bing Futch at 1:23 AM

Hi, Bing. 'Enjoyed your flatpicking class at the 2009 Smoky Mountain Dulcimer Retreat. I thought we all sounded great after after a full morning of your brilliant instruction! Thanks so much for the time you spend teaching others with a passion for dulcimers. We were in awe during your concert after the banquet. Hope you had a great time! Thanks again.